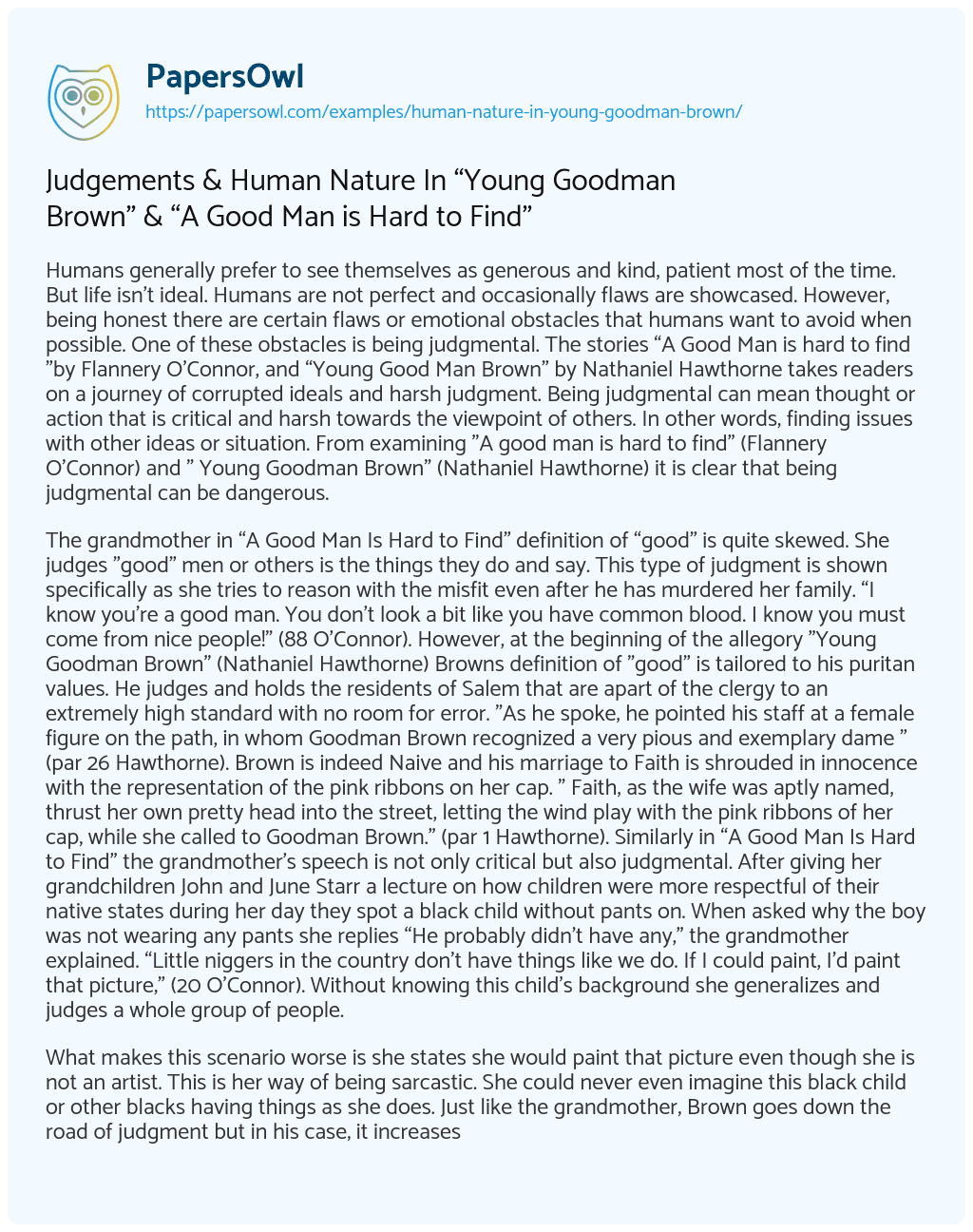 Humans generally prefer to see themselves as generous and kind, patient most of the time. But life isn’t ideal. Humans are not perfect and occasionally flaws are showcased. However, being honest there are certain flaws or emotional obstacles that humans want to avoid when possible. One of these obstacles is being judgmental. The stories “A Good Man is hard to find ”by Flannery O’Connor, and “Young Good Man Brown” by Nathaniel Hawthorne takes readers on a journey of corrupted ideals and harsh judgment. Being judgmental can mean thought or action that is critical and harsh towards the viewpoint of others. In other words, finding issues with other ideas or situation. From examining “A good man is hard to find” (Flannery O’Connor) and ” Young Goodman Brown” (Nathaniel Hawthorne) it is clear that being judgmental can be dangerous.

The grandmother in “A Good Man Is Hard to Find” definition of “good” is quite skewed. She judges “good” men or others is the things they do and say. This type of judgment is shown specifically as she tries to reason with the misfit even after he has murdered her family. “I know you’re a good man. You don’t look a bit like you have common blood. I know you must come from nice people!” (88 O’Connor). However, at the beginning of the allegory “Young Goodman Brown” (Nathaniel Hawthorne) Browns definition of “good” is tailored to his puritan values. He judges and holds the residents of Salem that are apart of the clergy to an extremely high standard with no room for error. “As he spoke, he pointed his staff at a female figure on the path, in whom Goodman Brown recognized a very pious and exemplary dame ” (par 26 Hawthorne). Brown is indeed Naive and his marriage to Faith is shrouded in innocence with the representation of the pink ribbons on her cap. ” Faith, as the wife was aptly named, thrust her own pretty head into the street, letting the wind play with the pink ribbons of her cap, while she called to Goodman Brown.” (par 1 Hawthorne). Similarly in “A Good Man Is Hard to Find” the grandmother’s speech is not only critical but also judgmental. After giving her grandchildren John and June Starr a lecture on how children were more respectful of their native states during her day they spot a black child without pants on. When asked why the boy was not wearing any pants she replies “He probably didn’t have any,” the grandmother explained. “Little niggers in the country don’t have things like we do. If I could paint, I’d paint that picture,” (20 O’Connor). Without knowing this child’s background she generalizes and judges a whole group of people.

What makes this scenario worse is she states she would paint that picture even though she is not an artist. This is her way of being sarcastic. She could never even imagine this black child or other blacks having things as she does. Just like the grandmother, Brown goes down the road of judgment but in his case, it increases during his venture with the Devil. During their travel, Brown is exposed to more people of Salem participating in a similar ceremony that Brown is to be a part of. ” It vexed him the more, because he could have sworn, were such a thing possible, that he recognized the voices of the minister and Deacon Gookin, jogging along quietly, as they were wont to do”( 42 Hawthorne). In spite of the judgmental nature of the two characters, things become worse towards the end of both short stories. The Grandmother is finally able to view others with compassion but only because her life is on the line. “Why you’re one of my babies. You’re one of my own children” (par 136 O’Connor) As her family is being systematically murdered she never begs for the misfit to spare her children or grandchildren nor does she show regard for their lives. She repeatedly questions the misfit “You’ve got good blood! I know you wouldn’t shoot a lady! I know you come from nice people! Pray! Jesus, you ought not to shoot a lady. I’ll give you all the money I’ve got!” (131 O’Connor).

Judging that she knows his true character proves to be fatal for the grandmother. Brown comes to the realization that a lot of the people around him are sinners. This leads Brown to question the decency of the people around him. “My Faith is gone!” cried he, after one stupefied moment. “There is no good on earth; and sin is but a name. Come, devil; for to thee is this world given.” (par 50 Hawthorne) “On the Sabbath-day, when the congregation were singing a holy psalm, he could not listen, because an anthem of sin rushed loudly upon his ear, and drowned all the blessed strain” (par 78 Hawthorne). Brown went from this Naive individual looking at life through a puritan lense, to judging those around him without acknowledging the possibility of human error. Overall both characters end their prospective journies with a different outlook than they entered with. For Brown, he sees the evilness that everyone is capable of and for the Grandmother when facing death she is finally to able to look at others with compassion. Being judgmental can mean thought or action that is critical and harsh towards the viewpoint of others. In other words, finding issues with other ideas or situations. From examining “A good man is hard to find” (Flannery O’Connor) and ” Young Goodman Brown” (Nathaniel Hawthorne) it is clear that being judgmental can be dangerous.