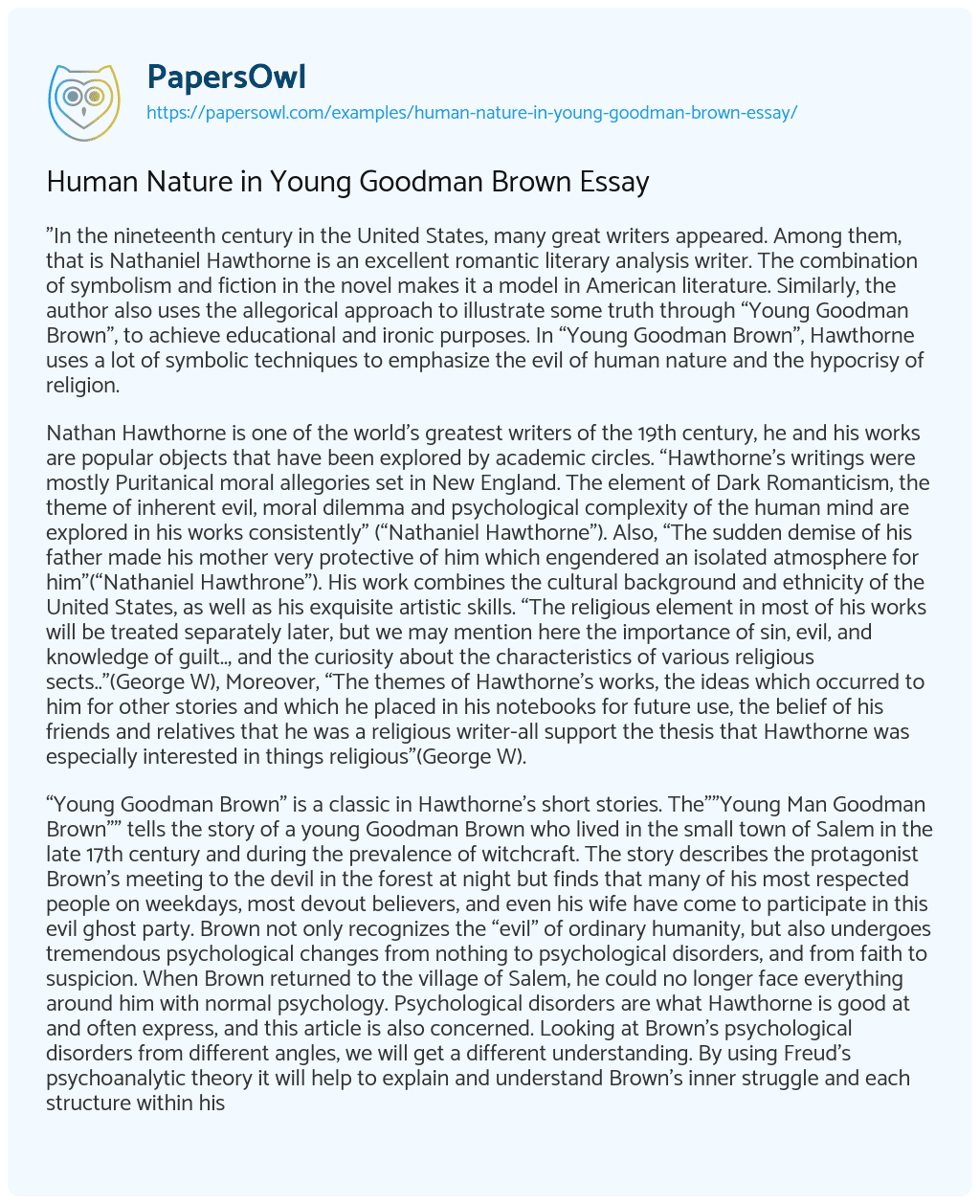 “In the nineteenth century in the United States, many great writers appeared. Among them, that is Nathaniel Hawthorne is an excellent romantic literary analysis writer. The combination of symbolism and fiction in the novel makes it a model in American literature. Similarly, the author also uses the allegorical approach to illustrate some truth through “Young Goodman Brown”, to achieve educational and ironic purposes. In “Young Goodman Brown”, Hawthorne uses a lot of symbolic techniques to emphasize the evil of human nature and the hypocrisy of religion.

Nathan Hawthorne is one of the world’s greatest writers of the 19th century, he and his works are popular objects that have been explored by academic circles. “Hawthorne’s writings were mostly Puritanical moral allegories set in New England. The element of Dark Romanticism, the theme of inherent evil, moral dilemma and psychological complexity of the human mind are explored in his works consistently” (“Nathaniel Hawthorne”). Also, “The sudden demise of his father made his mother very protective of him which engendered an isolated atmosphere for him”(“Nathaniel Hawthrone”). His work combines the cultural background and ethnicity of the United States, as well as his exquisite artistic skills. “The religious element in most of his works will be treated separately later, but we may mention here the importance of sin, evil, and knowledge of guilt.., and the curiosity about the characteristics of various religious sects..”(George W), Moreover, “The themes of Hawthorne’s works, the ideas which occurred to him for other stories and which he placed in his notebooks for future use, the belief of his friends and relatives that he was a religious writer-all support the thesis that Hawthorne was especially interested in things religious”(George W).

“Young Goodman Brown” is a classic in Hawthorne’s short stories. The””Young Man Goodman Brown”” tells the story of a young Goodman Brown who lived in the small town of Salem in the late 17th century and during the prevalence of witchcraft. The story describes the protagonist Brown’s meeting to the devil in the forest at night but finds that many of his most respected people on weekdays, most devout believers, and even his wife have come to participate in this evil ghost party. Brown not only recognizes the “evil” of ordinary humanity, but also undergoes tremendous psychological changes from nothing to psychological disorders, and from faith to suspicion. When Brown returned to the village of Salem, he could no longer face everything around him with normal psychology. Psychological disorders are what Hawthorne is good at and often express, and this article is also concerned. Looking at Brown’s psychological disorders from different angles, we will get a different understanding. By using Freud’s psychoanalytic theory it will help to explain and understand Brown’s inner struggle and each structure within his personality, and his psychological disorder, and his self-ideal collapse, and his personality coordination. In the context of religion and the times, Brown’s psychological disorder reflects the inner torture and suffering of the Puritans, as well as the attitude of these, teachings from faith to suspicion. Combined with Nathaniel Hawthorne’s family background, life experience, and thought changes. Brown’s pain and dysfunction are the contradiction and confusion of the author himself.

First of all, this article is symbolic of the protagonist’s name and his characteristics. The protagonist’s name is Goodman, and his last name is Brown. The last name contains two meanings. One of them is that Brown is a common name that has no special meaning in the nineteenth century. This can reflect that Brown has experienced life like most people. An ordinary, kind person, but with curiosity about exploring the unknown world. Regardless of discouragement from others, he chose to walk between the darkness and the light and to spend the rest of his life doing it. The other meaning is that his last name is Brown, and brown it is also a color which means that gives the feeling of loneliness, sadness, and isolation. It also gives evidence for Brown’s encounter in the forest and set the tone for his later life.

Secondly, the name of the male protagonist is Goodman, which implies that the protagonist is a good person, respectful and has feared God. The name of the main female character, Faith, which implies the meaning of purity, loyalty, and sacredness. Just like the first mention of Faith in the novel, “And Faith, as the wife was aptly named.” This clearly shows that Faith symbolizes Brown’s belief in love, religion, and humanity. It is because of the existence of Faith, the loyal and beautiful wife, that the determination of Brown to rush to the devil’s date had been shaken, his footsteps hesitated, and the struggle between good and evil in his heart was fierce, “With Heaven above, and Faith below, I will yet stand firm against the devil!” However, when Brown refused Faith’s retention to leave the forest despite, he proves that he had chosen to deviate from faith. At this time, Faith is the last person that Goodman trusts until Faith appears like the last of his straw, overwhelming his unwavering beliefs, he says “My Faith is gone! There is no good on earth, and sin is but a name. Come, devil! For to thee is this world given.” Although Goodman kept the bottom line and did not sell himself to the devil, his peaceful life has been completely subverted.

Furthermore, in addition to the protagonist Brown and his wife Faith, the other characters in the novel also have their own symbolic meaning. For example, the traveler of the Night meeting who is the person sitting under the old tree. That person appeared after Brown’s self-talk “What if the devil himself should be at my very elbow”, who is holding a cane that resembles a black snake, and old lady Goody Gloyse screams when she recognizes him. This kind of situation implies the appearance of the old man as a symbol of the devil. He leads Brown into the devil’s territory, mocking Brown’s respected decent and devout Christians. The old man reveals the ugly face behind these people. However, he did not force Brown to walk with him, which also revealed another meaning of this role setting: the novel emphasizes that he “appears in the same rank of life as Goodman Brown, and bearing a considerable resemblance to him, though perhaps more in expression than features. Still, they might have been taken for father and son” when describing the appearance of the “devil”. This narrative and setting express the Nathaniel Hawthorne’s thinking about human nature and original sin, that is, the “”devil”” does not exist only in the external world, and the evil comes more from the inner depths and nature of the human being. Other characters in the text, such as the pastor, the figures appearing at the state conference, and the folks in the township represent the mortal beings in the world. This is different from Brown, who eventually fled the devil’s party. They chose another more direct and secular life to see the world of good and evil, and surrender to the inner desire and hypocritically.

However, from the article “Hawthorne’s “Young Goodman Brown”: Cynicism or Meliorism? by Paul W.Miller, he writes “Even Faith was a witch, in terms of my footnote definition of the word. She had been tempted by Satan; then, yielding initially to temptation much as Brown himself had done, suffered herself to be conveyed to the Withes’ Sabbath to conclude her pact” and “Faith’s pink ribbon which Goodman Brown sees fluttering down in the forest is the confession of her initial yielding. But Faith’s confession also serves as a means of grace..the pink ribbons keep Faith humble and honest and thus contribute to her ultimate preservation from the Evil One” (Paul W). This pink ribbon is very important in the article, and it has appeared five times in the text. The first time is the beginning of the story, Brown is leaving home, his wife Faith “thrust her own pretty head into the street, letting the wind play with the pink ribbons of her cap, while she called to Goodman Brown.” The second time is Faith who is wearing a pink ribbon, wishes her husband “God bless you and may you find all well when you come back.” The third time is Brown left and walked to the corner to look back, Faith’s pink ribbon was still flying. The pure and beautiful color of pink symbolizes the nature of the wife and the faith. In Hawthorne’s novels, red often symbolizes sin, while white represents purity. Later, when the key moment of Brown’s inner change, the pink ribbon appeared twice. When he meets the usual very devout old lady and the person who is going to appear at the state conference, the Brown world suffered a subversion and he began to lose his faith. At this time, the pink ribbon of the wife who fell from the sky was almost his last straw. Finally, when Brown sees the pink ribbon on Faith’s head, he flees his wife’s arms, and the pink ribbon becomes a great irony of his previous life.

In conclusion, Hawthorne has always been regarded as an outstanding representative of American native literature. He is good at using symbolic techniques and psychological descriptions and has developed romantic psychoanalysis, which has created a precedent for American analytical novels. In the novel “”Young Goodman Brown””, Hawthorne expresses his deep questioning of human moral and human nature through the description of different characters and characteristics, with connotative features such as characters and artifacts. Therefore, this article has become a well-deserved example of American literature.”