What Is Generalized Anxiety Disorder 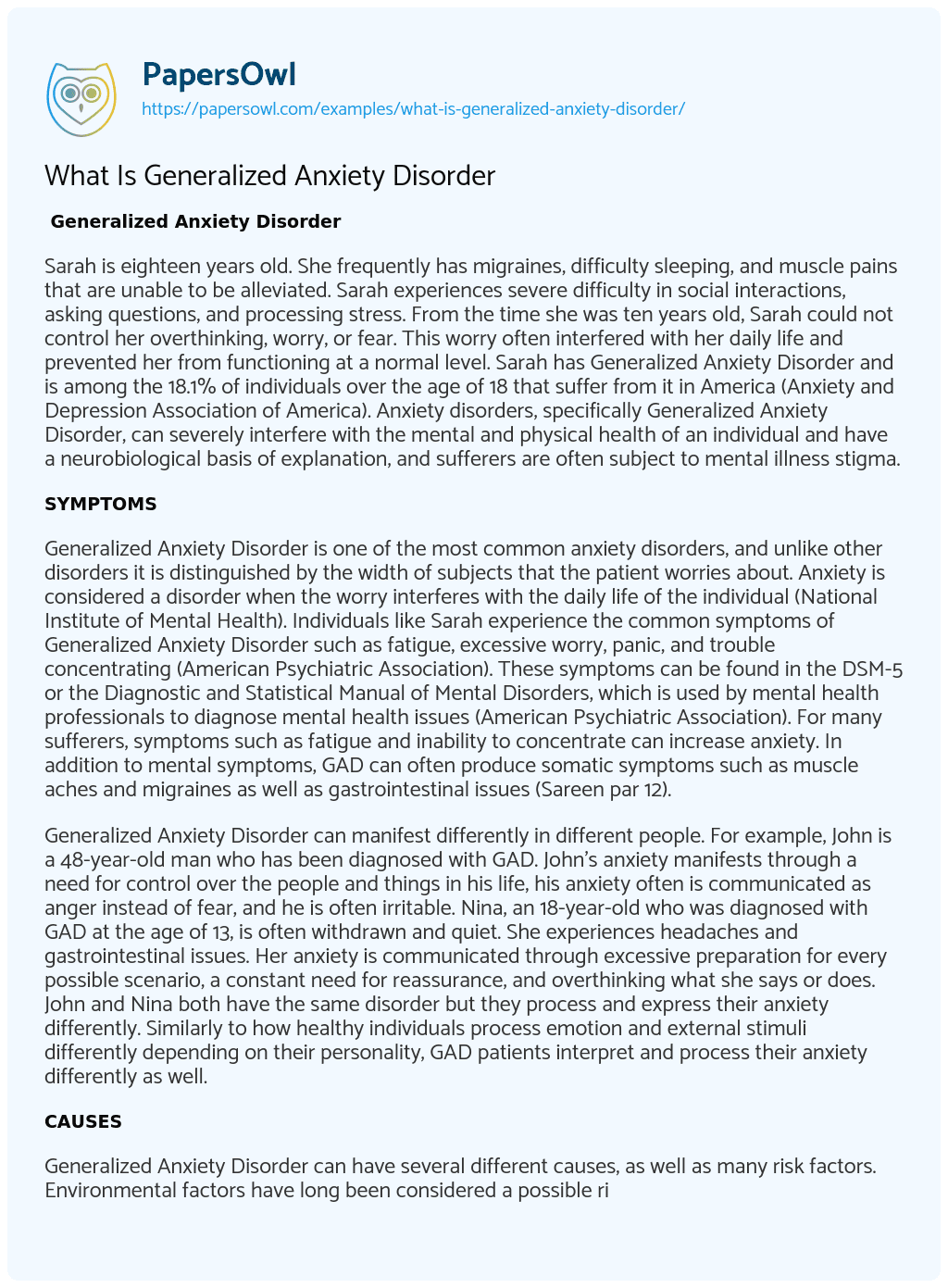 Sarah is eighteen years old. She frequently has migraines, difficulty sleeping, and muscle pains that are unable to be alleviated. Sarah experiences severe difficulty in social interactions, asking questions, and processing stress. From the time she was ten years old, Sarah could not control her overthinking, worry, or fear. This worry often interfered with her daily life and prevented her from functioning at a normal level. Sarah has Generalized Anxiety Disorder and is among the 18.1% of individuals over the age of 18 that suffer from it in America (Anxiety and Depression Association of America). Anxiety disorders, specifically Generalized Anxiety Disorder, can severely interfere with the mental and physical health of an individual and have a neurobiological basis of explanation, and sufferers are often subject to mental illness stigma.

Generalized Anxiety Disorder is one of the most common anxiety disorders, and unlike other disorders it is distinguished by the width of subjects that the patient worries about. Anxiety is considered a disorder when the worry interferes with the daily life of the individual (National Institute of Mental Health). Individuals like Sarah experience the common symptoms of Generalized Anxiety Disorder such as fatigue, excessive worry, panic, and trouble concentrating (American Psychiatric Association). These symptoms can be found in the DSM-5 or the Diagnostic and Statistical Manual of Mental Disorders, which is used by mental health professionals to diagnose mental health issues (American Psychiatric Association). For many sufferers, symptoms such as fatigue and inability to concentrate can increase anxiety. In addition to mental symptoms, GAD can often produce somatic symptoms such as muscle aches and migraines as well as gastrointestinal issues (Sareen par 12).

Generalized Anxiety Disorder can manifest differently in different people. For example, John is a 48-year-old man who has been diagnosed with GAD. John’s anxiety manifests through a need for control over the people and things in his life, his anxiety often is communicated as anger instead of fear, and he is often irritable. Nina, an 18-year-old who was diagnosed with GAD at the age of 13, is often withdrawn and quiet. She experiences headaches and gastrointestinal issues. Her anxiety is communicated through excessive preparation for every possible scenario, a constant need for reassurance, and overthinking what she says or does. John and Nina both have the same disorder but they process and express their anxiety differently. Similarly to how healthy individuals process emotion and external stimuli differently depending on their personality, GAD patients interpret and process their anxiety differently as well.

Generalized Anxiety Disorder can have several different causes, as well as many risk factors. Environmental factors have long been considered a possible risk factor for developing GAD, as well as genetics and heredity. For example, those who experience childhood trauma or stresses, such as a divorce in the family or abuse, may be at a higher risk for developing GAD (Blanco). According to the American Psychiatric Publishing Textbook of Psychiatry, other risk factors include: “female sex, younger age, single or divorced marital status, low socioeconomic status, poor social supports, and low education” (Sareen). Females face pressure in their daily life that can easily lead to anxiety, including street harassment, sexual harassment, and discrimination. Undergoing a divorce or being single can put a serious strain on financial income as well as putting a considerable amount of emotional stress on the individual. Low education and socioeconomic status could cause difficulty in finding employment or advancing in status; for example, a lack of quality education can prevent someone from obtaining a higher-income job. All of the above-mentioned risk factors can increase anxiety in the individual experiencing them. When this anxiety is not properly dealt with and begins to interfere with the individual’s life, they could be at risk for developing GAD.

In the past, there was a very limited understanding of the neurological and biological basis for anxiety disorders. More recently, Generalized Anxiety Disorder has been studied on a neurobiological basis. Recent studies have documented differences in brains with anxiety disorders compared to healthy brains. One of these differences is in the amygdala, the part of the brain that controls fear responses. James Anderson explains this fear response, saying:

The clusters of the amygdala are activated when an individual expresses feelings of fear or aggression. This occurs because the amygdala is the primary structure of the brain responsible for flight or fight response. (Anderson par 36)

This part of the brain is vital in processing emotion, particularly fear, and the activation of the amygdala in response to negative stimuli is an important factor of understanding anxiety.

Feelings of anxiety start with a catalyst ??“ an environmental stimulus that provokes stress. This can include various smells, sights, and internal feelings that result in anxiety. The amygdala reacts to this stimuli by preparing to either stand and fight or to turn and run. This response is triggered by the release of adrenaline into the bloodstream. Consequently, blood sugar rises, becoming immediately available to the muscles for quick energy. Shaking may occur in an attempt to return blood to the rest of the body. A better understanding of the amygdala and its various functions may lead to a new way of treating clinical anxiety. (Anderson par 40)

This reaction is the body’s way of preparing to face a danger, but when the body reacts this way often, it can be physically as well as mentally draining. This rise of adrenaline eventually wears off, and leaving the body to recover.

An increased activation means that there is an increased fear response, which gives biological proof for anxiety disorders. In addition to this overactivity, another study has found that the area of the brain that is partially responsible for regulating signals from the amygdala has shown a failure to activate, causing ineffective regulation of emotions and fear stimuli in the brain (Etkin et al). This region is called the pregenual cingulate cortex. Etkin states:

Moreover, we recently found functional connectivity and structural evidence for an intra-amygdalar abnormality at a subregional level in generalized anxiety disorder (12). Thus, it appears that patients have deficits in both activating relevant control regions (pregenual cingulate) and in the connectivity required for such regions to exert control over limbic structures. (Etkin et al)

The connections between parts of the limbic system are an important part of emotional regulation, and as stated above by Etkin, there was a lack or deficit in the functionality or existence of these connections. This would lead to an impaired ability to regulate emotion which is a possible cause of the excessive worry that GAD and other anxiety disorder patients face. The body has a system in place to regulate the emotions and stimuli that we experience every day, but what happens when it fails? The individual is then left with an onslaught of emotions that they have no way of processing.

The overactivity of the amygdala and the failure of activation of the pregenual cingulate cortex are neurobiological evidence of the difference in the brain structure of individuals with anxiety disorders. Elizabeth Martin summarizes this concept in an excerpt from her study about the neurobiology of anxiety disorders, saying:

The Neurobiology of Anxiety Disorders Commonalities in anxiety disorders include functional hyperactivity in limbic regions, particularly the amygdala, and the inability of higher cortical executive areas to normalize the limbic response to stimuli. (Martin et al)

Mental illness has been surrounded by stigma. Stigma can take many forms, but is generally an association of negativity or prejudice toward a certain topic. Mental illness stigma often prevents or discourages people from seeking necessary treatment due to fear of discrimination or the negative reaction of others. According to Anxiety.org, a survey conducted in 2010 showed that 46% of surveyed adolescents with mental disorders reported “experiencing unfair judgment from family members because of their disorders” and 62% reported experiencing “the same stigmatization from their peers” (Anxiety.org). This level of judgment from friends, family, and society can deter an individual from seeking necessary treatment. For some individuals, this stigma prevents them from acknowledging that they need help, and self-stigmatization can worsen the symptoms they experience. For those who suffer from anxiety disorders, stigma can have an even worse effect. The constant worry caused by the disorder can heighten the fear of judgment from others which can become a barrier to seeking treatment. Due to fear of what others might think or say, they might avoid seeking help. By raising awareness of the reality of mental illness we can begin to dismantle the harmful stigma surrounding it. This can be done by educating ourselves about the causes of mental illness and having compassion for those who experience them.

Generalized Anxiety Disorder can be treated and many who live with this disorder can lead productive lives. Anxiety can be treated with cognitive behavioral therapy, antidepressants, and Selective Serotonin Reuptake Inhibitors or SSRIs. Cognitive behavioral therapy is a good option for those who prefer not to take medication because it addresses negative thinking patterns and helps the patient devise coping strategies to manage the symptoms of GAD (Mayo Clinic Staff). Luckily, there is little to no risk associated with CBT, although it could cause emotional discomfort or general discomfort. This type of treatment is a good way to address and attempt to manage symptoms of GAD. Antidepressants and SSRIs are common medications used to treat anxiety disorders. SSRIs work in the brain to keep serotonin in the synaptic cleft by preventing them from being reabsorbed. It is believed that high levels of serotonin can cause an elevated mood, thus working to alleviate symptoms (McIntosh).

Sarah has been on SSRIs for several years and has reported an alleviation of anxiety symptoms. For many like Sarah, cognitive behavioral therapy isn’t enough and medication is necessary. Not all of our brains are the same, however, and what works for some patients may not work for others.

Generalized Anxiety Disorder is one of the most common disorders in the U.S. According to the Anxiety and Depression Association of America, 6.8 million adults or 3.1% of the American population suffer from GAD (Anxiety and Depression Association of America). Fortunately, this disorder is highly treatable. While sufferers still continue to face social stigma, attitudes toward mental illness are changing. The evidence of neurobiological causes of mental illness has helped shift these attitudes away from personal responsibility and toward a comprehensive understanding of the true causes of anxiety disorders like GAD. There is no cure, but individuals can live productive and fulfilling lives even while living with Generalized Anxiety Disorder.

What Is Generalized Anxiety Disorder. (2019, Jul 28). Retrieved from https://papersowl.com/examples/what-is-generalized-anxiety-disorder/