Why People Get Claustrophobic? 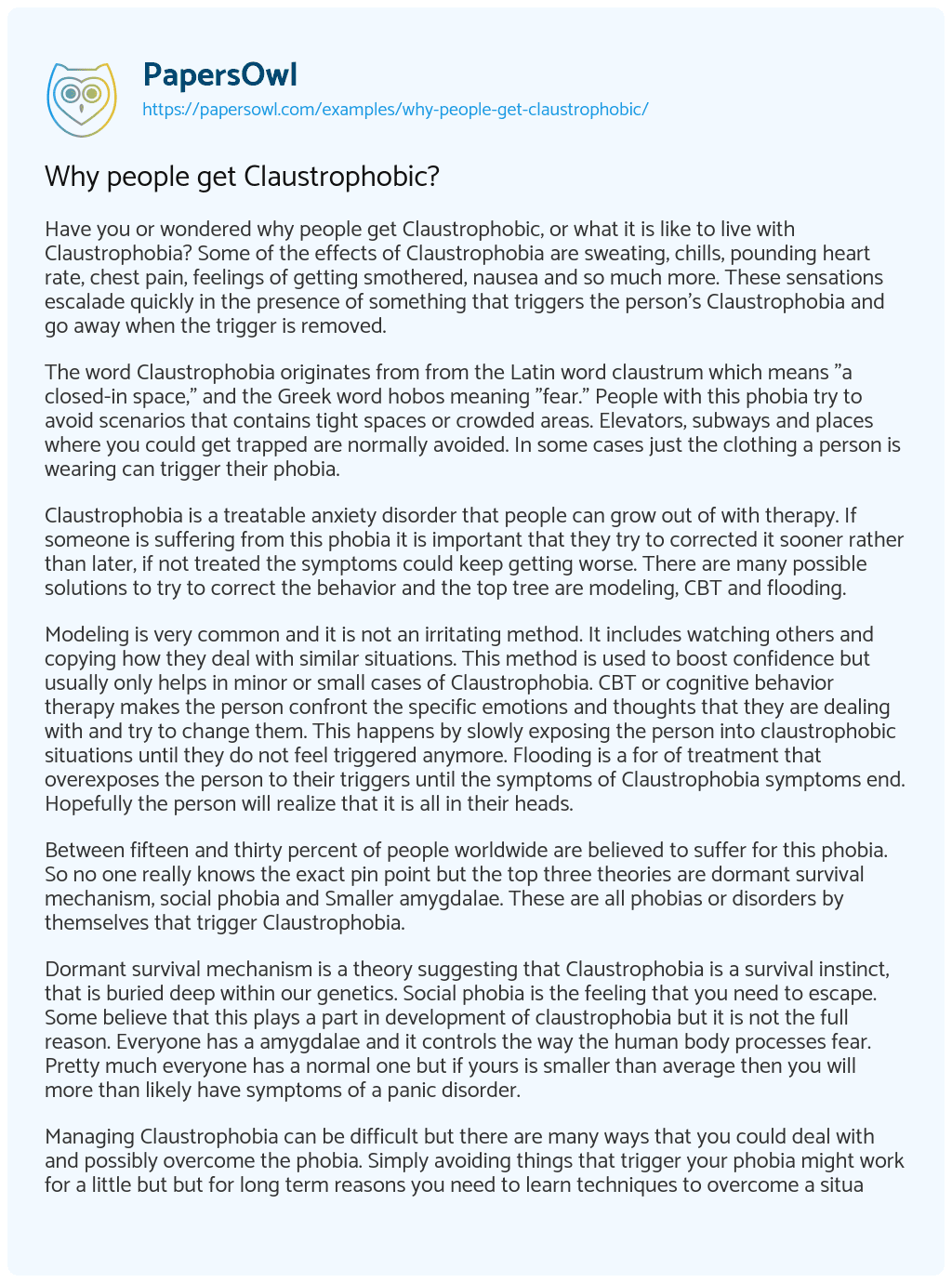 Have you or wondered why people get Claustrophobic, or what it is like to live with Claustrophobia? Some of the effects of Claustrophobia are sweating, chills, pounding heart rate, chest pain, feelings of getting smothered, nausea and so much more. These sensations escalade quickly in the presence of something that triggers the person’s Claustrophobia and go away when the trigger is removed.

The word Claustrophobia originates from from the Latin word claustrum which means “a closed-in space,” and the Greek word hobos meaning “fear.” People with this phobia try to avoid scenarios that contains tight spaces or crowded areas. Elevators, subways and places where you could get trapped are normally avoided. In some cases just the clothing a person is wearing can trigger their phobia.

Claustrophobia is a treatable anxiety disorder that people can grow out of with therapy. If someone is suffering from this phobia it is important that they try to corrected it sooner rather than later, if not treated the symptoms could keep getting worse. There are many possible solutions to try to correct the behavior and the top tree are modeling, CBT and flooding.

Modeling is very common and it is not an irritating method. It includes watching others and copying how they deal with similar situations. This method is used to boost confidence but usually only helps in minor or small cases of Claustrophobia. CBT or cognitive behavior therapy makes the person confront the specific emotions and thoughts that they are dealing with and try to change them. This happens by slowly exposing the person into claustrophobic situations until they do not feel triggered anymore. Flooding is a for of treatment that overexposes the person to their triggers until the symptoms of Claustrophobia symptoms end. Hopefully the person will realize that it is all in their heads.

Between fifteen and thirty percent of people worldwide are believed to suffer for this phobia. So no one really knows the exact pin point but the top three theories are dormant survival mechanism, social phobia and Smaller amygdalae. These are all phobias or disorders by themselves that trigger Claustrophobia.

Dormant survival mechanism is a theory suggesting that Claustrophobia is a survival instinct, that is buried deep within our genetics. Social phobia is the feeling that you need to escape. Some believe that this plays a part in development of claustrophobia but it is not the full reason. Everyone has a amygdalae and it controls the way the human body processes fear. Pretty much everyone has a normal one but if yours is smaller than average then you will more than likely have symptoms of a panic disorder.

Managing Claustrophobia can be difficult but there are many ways that you could deal with and possibly overcome the phobia. Simply avoiding things that trigger your phobia might work for a little but but for long term reasons you need to learn techniques to overcome a situation because you could find yourself in a scary unavoidable situation. The top five tips are taking deep, slow breaths while counting to three with each breath, focusing on something safe, repeatedly remind yourself that your fear and attack will pass, challenge your fear by saying that the trigger is irrelevant or unimportant and lastly find your happy place.

Resisting an attack is also never a good thing. You may want the attack to stop happening but if you cannot stop it then your anxiety may increase and cause the attack to get worse. Instead, accept that the attack is happening and remind yourself that you are okay. That it will pass.

In conclusion Claustrophobia is a form of an anxiety attack or disorder, in which a fear of being trapped or suffocated can be turned into a panic attack. The most important thing to remember is to breathe and remember that it will all be over soon.

Why people get Claustrophobic?. (2019, Sep 07). Retrieved from https://papersowl.com/examples/why-people-get-claustrophobic/

A Type of Anxiety Disorder – Phobia