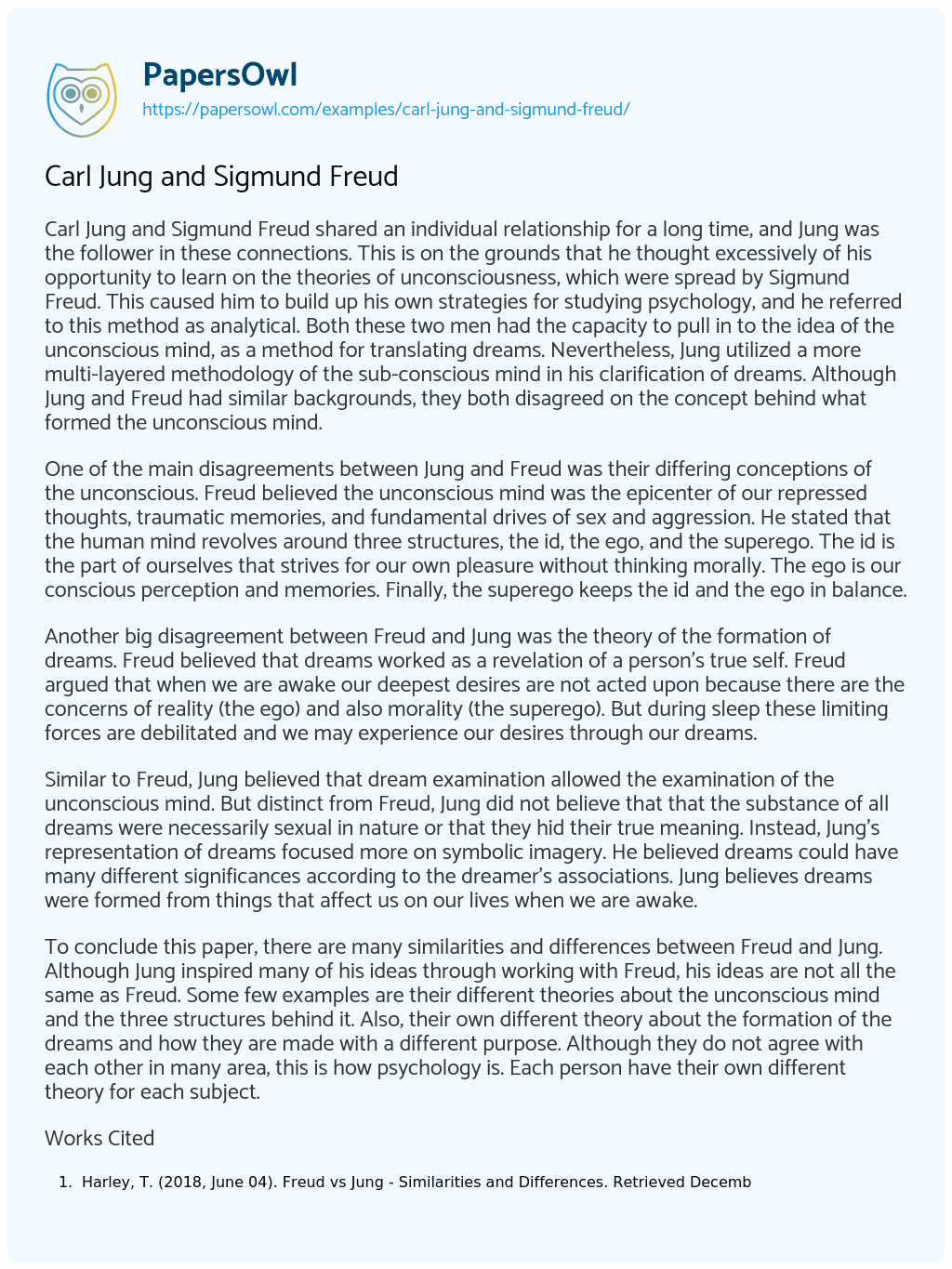 Carl Jung and Sigmund Freud shared an individual relationship for a long time, and Jung was the follower in these connections. This is on the grounds that he thought excessively of his opportunity to learn on the theories of unconsciousness, which were spread by Sigmund Freud. This caused him to build up his own strategies for studying psychology, and he referred to this method as analytical. Both these two men had the capacity to pull in to the idea of the unconscious mind, as a method for translating dreams. Nevertheless, Jung utilized a more multi-layered methodology of the sub-conscious mind in his clarification of dreams. Although Jung and Freud had similar backgrounds, they both disagreed on the concept behind what formed the unconscious mind.

One of the main disagreements between Jung and Freud was their differing conceptions of the unconscious. Freud believed the unconscious mind was the epicenter of our repressed thoughts, traumatic memories, and fundamental drives of sex and aggression. He stated that the human mind revolves around three structures, the id, the ego, and the superego. The id is the part of ourselves that strives for our own pleasure without thinking morally. The ego is our conscious perception and memories. Finally, the superego keeps the id and the ego in balance.

Another big disagreement between Freud and Jung was the theory of the formation of dreams. Freud believed that dreams worked as a revelation of a person’s true self. Freud argued that when we are awake our deepest desires are not acted upon because there are the concerns of reality (the ego) and also morality (the superego). But during sleep these limiting forces are debilitated and we may experience our desires through our dreams.

Similar to Freud, Jung believed that dream examination allowed the examination of the unconscious mind. But distinct from Freud, Jung did not believe that that the substance of all dreams were necessarily sexual in nature or that they hid their true meaning. Instead, Jung’s representation of dreams focused more on symbolic imagery. He believed dreams could have many different significances according to the dreamer’s associations. Jung believes dreams were formed from things that affect us on our lives when we are awake.

To conclude this paper, there are many similarities and differences between Freud and Jung. Although Jung inspired many of his ideas through working with Freud, his ideas are not all the same as Freud. Some few examples are their different theories about the unconscious mind and the three structures behind it. Also, their own different theory about the formation of the dreams and how they are made with a different purpose. Although they do not agree with each other in many area, this is how psychology is. Each person have their own different theory for each subject.

Carl Jung and Sigmund Freud. (2019, May 19). Retrieved from https://papersowl.com/examples/carl-jung-and-sigmund-freud/

The Studies of Sigmund Freud