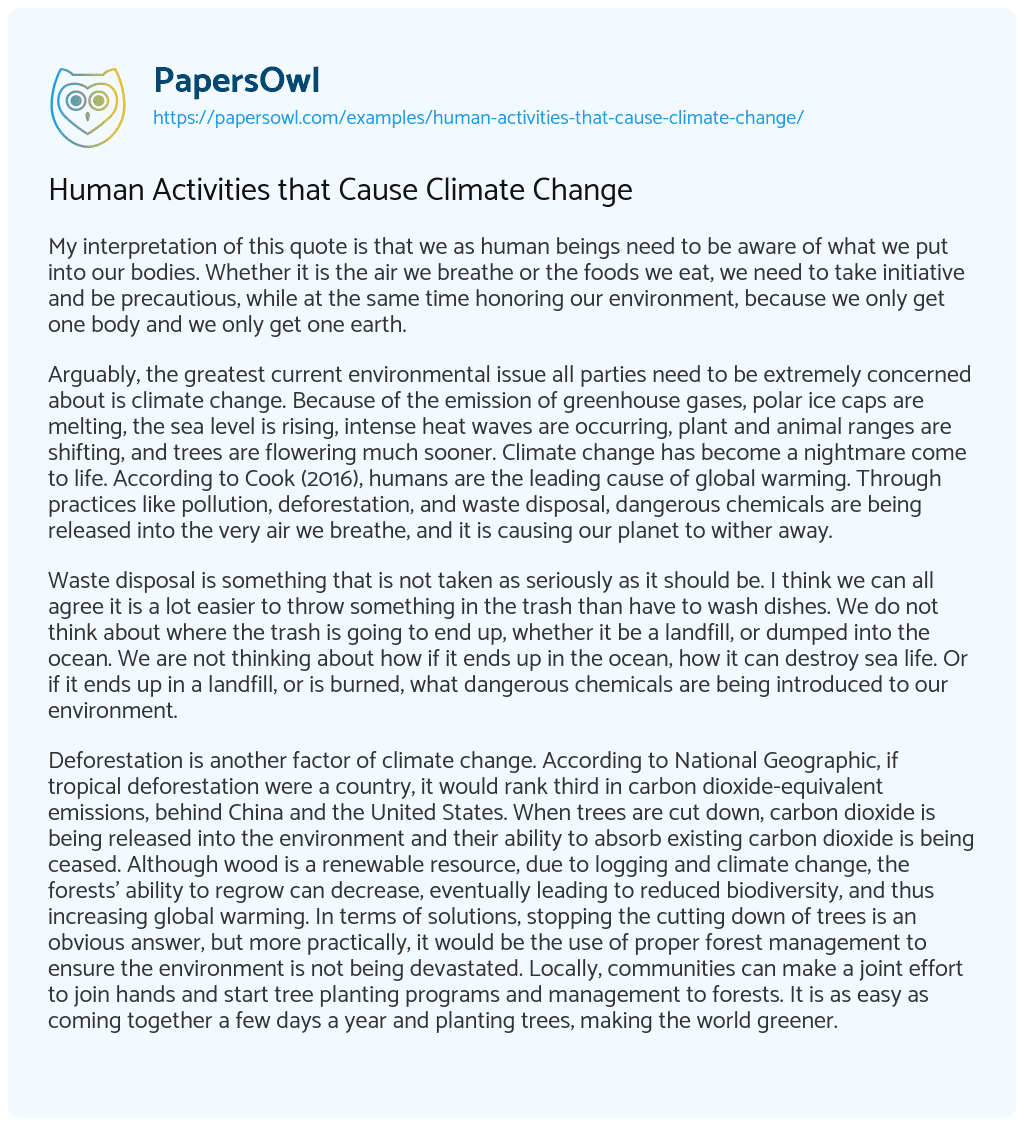 My interpretation of this quote is that we as human beings need to be aware of what we put into our bodies. Whether it is the air we breathe or the foods we eat, we need to take initiative and be precautious, while at the same time honoring our environment, because we only get one body and we only get one earth.

Arguably, the greatest current environmental issue all parties need to be extremely concerned about is climate change. Because of the emission of greenhouse gases, polar ice caps are melting, the sea level is rising, intense heat waves are occurring, plant and animal ranges are shifting, and trees are flowering much sooner. Climate change has become a nightmare come to life. According to Cook (2016), humans are the leading cause of global warming. Through practices like pollution, deforestation, and waste disposal, dangerous chemicals are being released into the very air we breathe, and it is causing our planet to wither away.

Waste disposal is something that is not taken as seriously as it should be. I think we can all agree it is a lot easier to throw something in the trash than have to wash dishes. We do not think about where the trash is going to end up, whether it be a landfill, or dumped into the ocean. We are not thinking about how if it ends up in the ocean, how it can destroy sea life. Or if it ends up in a landfill, or is burned, what dangerous chemicals are being introduced to our environment.

Deforestation is another factor of climate change. According to National Geographic, if tropical deforestation were a country, it would rank third in carbon dioxide-equivalent emissions, behind China and the United States. When trees are cut down, carbon dioxide is being released into the environment and their ability to absorb existing carbon dioxide is being ceased. Although wood is a renewable resource, due to logging and climate change, the forests’ ability to regrow can decrease, eventually leading to reduced biodiversity, and thus increasing global warming. In terms of solutions, stopping the cutting down of trees is an obvious answer, but more practically, it would be the use of proper forest management to ensure the environment is not being devastated. Locally, communities can make a joint effort to join hands and start tree planting programs and management to forests. It is as easy as coming together a few days a year and planting trees, making the world greener.

Human Activities that Cause Climate Change. (2022, Mar 24). Retrieved from https://papersowl.com/examples/human-activities-that-cause-climate-change/