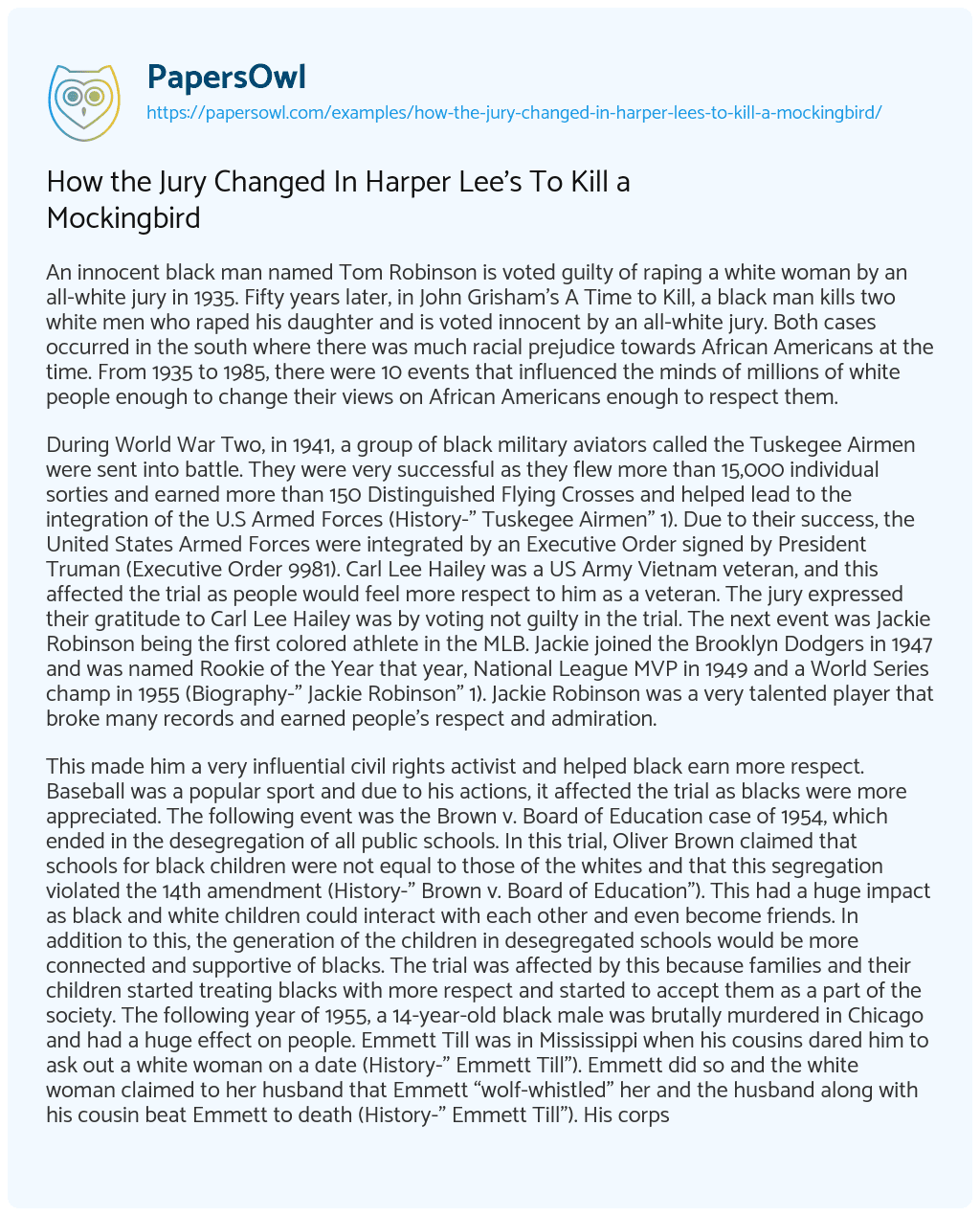 An innocent black man named Tom Robinson is voted guilty of raping a white woman by an all-white jury in 1935. Fifty years later, in John Grisham’s A Time to Kill, a black man kills two white men who raped his daughter and is voted innocent by an all-white jury. Both cases occurred in the south where there was much racial prejudice towards African Americans at the time. From 1935 to 1985, there were 10 events that influenced the minds of millions of white people enough to change their views on African Americans enough to respect them.

During World War Two, in 1941, a group of black military aviators called the Tuskegee Airmen were sent into battle. They were very successful as they flew more than 15,000 individual sorties and earned more than 150 Distinguished Flying Crosses and helped lead to the integration of the U.S Armed Forces (History-” Tuskegee Airmen” 1). Due to their success, the United States Armed Forces were integrated by an Executive Order signed by President Truman (Executive Order 9981). Carl Lee Hailey was a US Army Vietnam veteran, and this affected the trial as people would feel more respect to him as a veteran. The jury expressed their gratitude to Carl Lee Hailey was by voting not guilty in the trial. The next event was Jackie Robinson being the first colored athlete in the MLB. Jackie joined the Brooklyn Dodgers in 1947 and was named Rookie of the Year that year, National League MVP in 1949 and a World Series champ in 1955 (Biography-” Jackie Robinson” 1). Jackie Robinson was a very talented player that broke many records and earned people’s respect and admiration.

This made him a very influential civil rights activist and helped black earn more respect. Baseball was a popular sport and due to his actions, it affected the trial as blacks were more appreciated. The following event was the Brown v. Board of Education case of 1954, which ended in the desegregation of all public schools. In this trial, Oliver Brown claimed that schools for black children were not equal to those of the whites and that this segregation violated the 14th amendment (History-” Brown v. Board of Education”). This had a huge impact as black and white children could interact with each other and even become friends. In addition to this, the generation of the children in desegregated schools would be more connected and supportive of blacks. The trial was affected by this because families and their children started treating blacks with more respect and started to accept them as a part of the society. The following year of 1955, a 14-year-old black male was brutally murdered in Chicago and had a huge effect on people. Emmett Till was in Mississippi when his cousins dared him to ask out a white woman on a date (History-” Emmett Till”). Emmett did so and the white woman claimed to her husband that Emmett “wolf-whistled” her and the husband along with his cousin beat Emmett to death (History-” Emmett Till”). His corpse was found in a river 3 days later too beaten to identify except for the ring he had on. The Till family decided to have an open-casket funeral which led which led to an outbreak in the media and people were outraged when the verdicts were voted not guilty. The jurors from Carl Lee’s trial most likely very outraged at the outcome Emmett’s trial and did not want a very similar outcome to happen again in Lee’s trial as it was a very impactful event. James Meredith was the first black student to be accepted to the University of Mississippi in Oxford.

In 1962, he was finally admitted to Ole Miss after many applications and lawsuits, but this was not met with a positive response. On September 30, 1962, a riot erupted on the campus of Ole Miss where segregationists, students, and locals protested the enrollment of James Meredith (crdl-” Ole Miss Integration”). After some time, the protests started to get very violent and fights began between the US Marshalls and the protesters ending in two deaths and over 300 were injured. This was a very impactful event because the riot was seen by many and many people were against it as it was very violent and unnecessary. The jury was most likely affected by this because this led to more blacks going to all white colleges and universities where they would start to be accepted more. On August 28, 1963, one of the biggest protests in American history took place. More than 260,000 blacks and whites marched and protested segregation and discrimination against blacks (NAACP-” March on Washington”). In addition to this, Martin Luther King Jr. Delivered his famous “I Have A Dream” speech addressing the segregation and hatred there was towards blacks. This speech was covered by over 3,000 members of the press and was seen by millions of Americans (NAACP-” March on Washington”). The jury was affected by this as this was the turning point where more people were supporting the blacks and against segregation leading to their acceptance.

How the Jury Changed In Harper Lee’s To Kill a Mockingbird. (2021, May 10). Retrieved from https://papersowl.com/examples/how-the-jury-changed-in-harper-lees-to-kill-a-mockingbird/

Harper Lee’s to Kill a Mockingbird

A Story of Racial Injustice, Sexism and Prejudice in to Kill a Mockingbird by Harper Lee

In the Novel to Kill a Mockingbird

To Kill a Mockingbird Racism

Victim Blaming and to Kill a Mockingbird