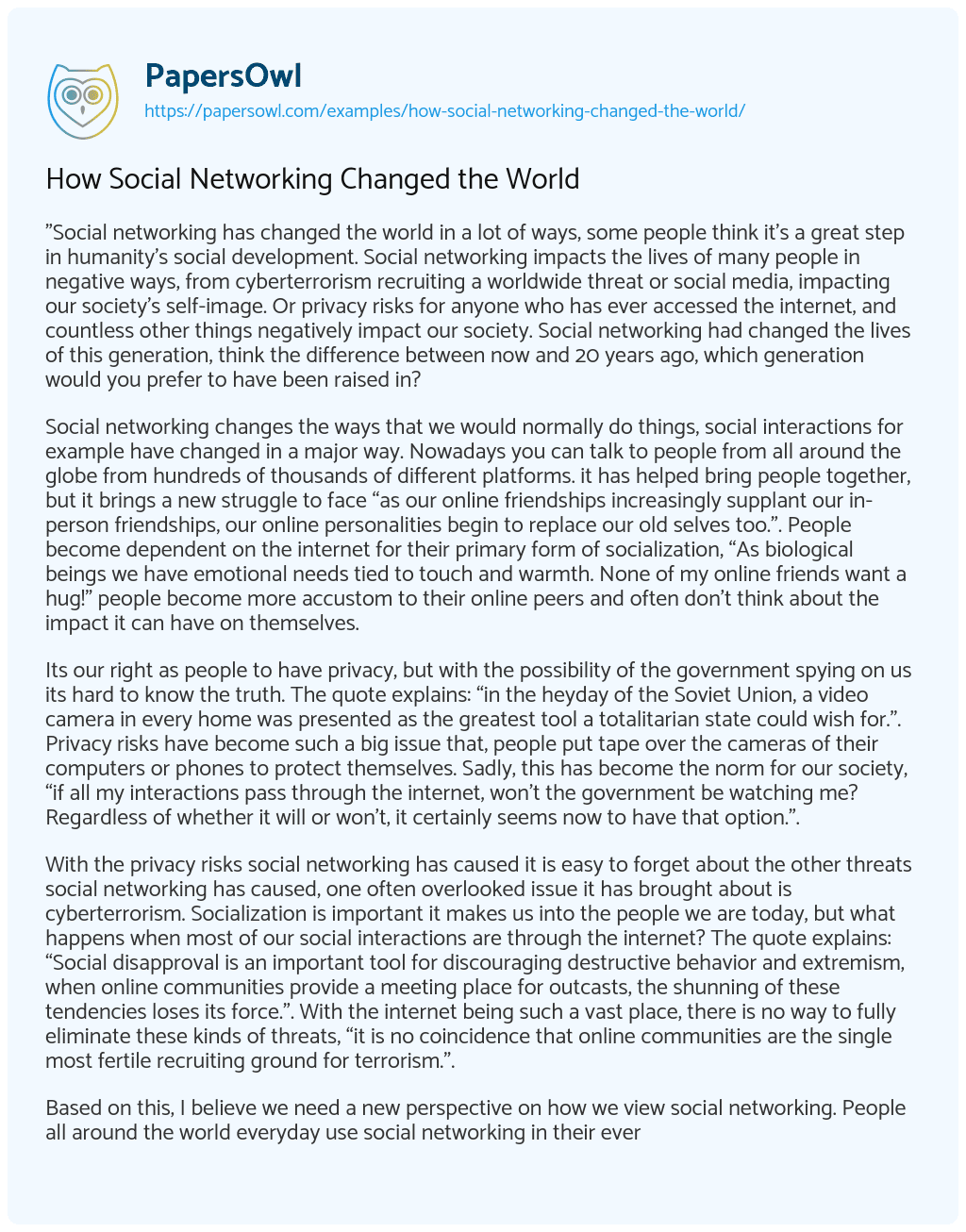 “Social networking has changed the world in a lot of ways, some people think it’s a great step in humanity’s social development. Social networking impacts the lives of many people in negative ways, from cyberterrorism recruiting a worldwide threat or social media, impacting our society’s self-image. Or privacy risks for anyone who has ever accessed the internet, and countless other things negatively impact our society. Social networking had changed the lives of this generation, think the difference between now and 20 years ago, which generation would you prefer to have been raised in?

Social networking changes the ways that we would normally do things, social interactions for example have changed in a major way. Nowadays you can talk to people from all around the globe from hundreds of thousands of different platforms. it has helped bring people together, but it brings a new struggle to face “as our online friendships increasingly supplant our in-person friendships, our online personalities begin to replace our old selves too.”. People become dependent on the internet for their primary form of socialization, “As biological beings we have emotional needs tied to touch and warmth. None of my online friends want a hug!” people become more accustom to their online peers and often don’t think about the impact it can have on themselves.

Its our right as people to have privacy, but with the possibility of the government spying on us its hard to know the truth. The quote explains: “in the heyday of the Soviet Union, a video camera in every home was presented as the greatest tool a totalitarian state could wish for.”. Privacy risks have become such a big issue that, people put tape over the cameras of their computers or phones to protect themselves. Sadly, this has become the norm for our society, “if all my interactions pass through the internet, won’t the government be watching me? Regardless of whether it will or won’t, it certainly seems now to have that option.”.

With the privacy risks social networking has caused it is easy to forget about the other threats social networking has caused, one often overlooked issue it has brought about is cyberterrorism. Socialization is important it makes us into the people we are today, but what happens when most of our social interactions are through the internet? The quote explains: “Social disapproval is an important tool for discouraging destructive behavior and extremism, when online communities provide a meeting place for outcasts, the shunning of these tendencies loses its force.”. With the internet being such a vast place, there is no way to fully eliminate these kinds of threats, “it is no coincidence that online communities are the single most fertile recruiting ground for terrorism.”.

Based on this, I believe we need a new perspective on how we view social networking. People all around the world everyday use social networking in their every day lives, even children use it. Don’t you think that something a child uses should have a little more regulation? Almost anyone in the world can access the internet at any time, there is little to no guidelines about what can and can’t happen which makes the ongoing threat that much bigger. But still we must keep looking for better solutions in hopes of keeping the public safe from the threats caused by social networking.

How Social Networking Changed the World. (2019, Dec 31). Retrieved from https://papersowl.com/examples/how-social-networking-changed-the-world/