Potter and the Journey to Become a Hero 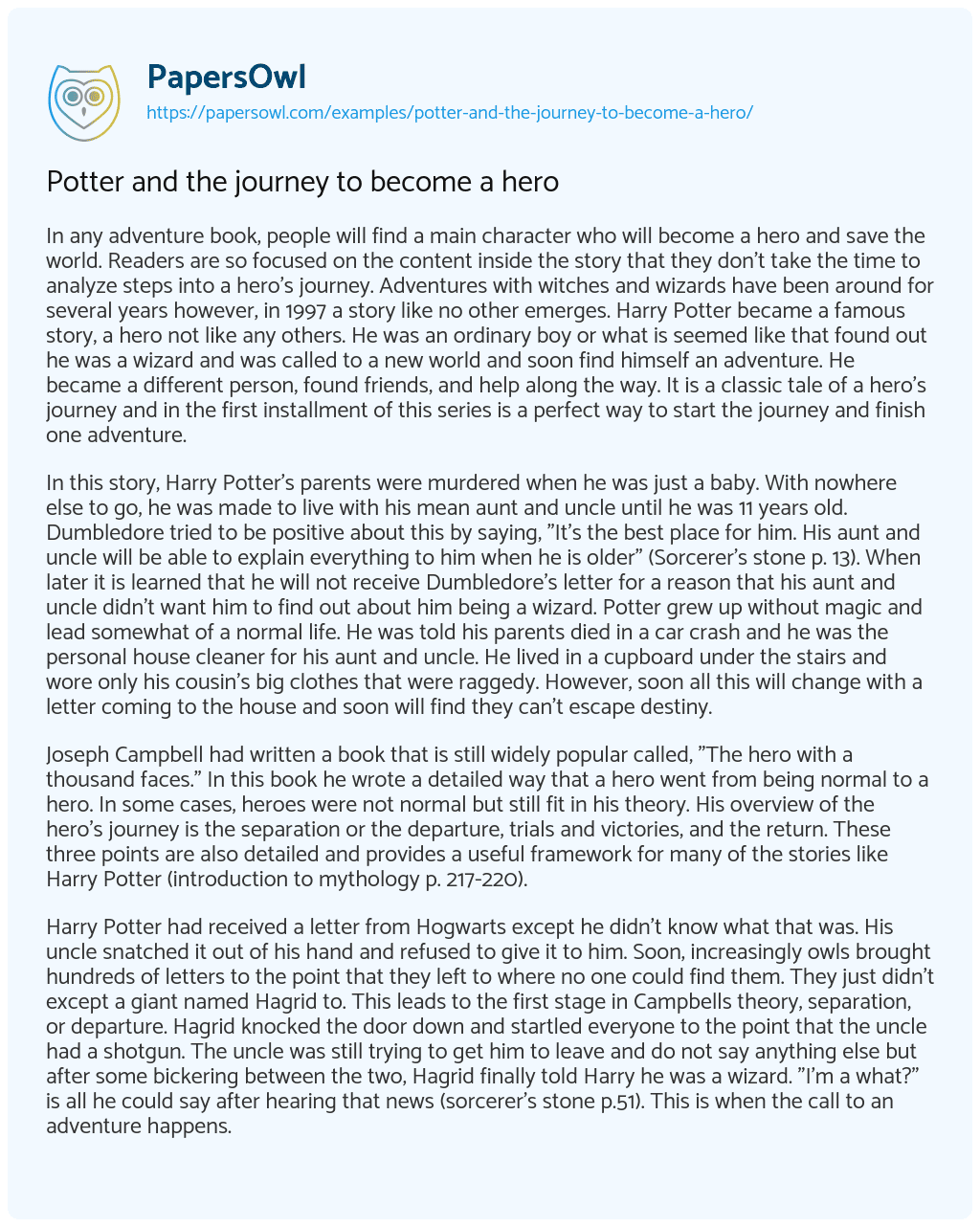 In any adventure book, people will find a main character who will become a hero and save the world. Readers are so focused on the content inside the story that they don’t take the time to analyze steps into a hero’s journey. Adventures with witches and wizards have been around for several years however, in 1997 a story like no other emerges. Harry Potter became a famous story, a hero not like any others. He was an ordinary boy or what is seemed like that found out he was a wizard and was called to a new world and soon find himself an adventure. He became a different person, found friends, and help along the way. It is a classic tale of a hero’s journey and in the first installment of this series is a perfect way to start the journey and finish one adventure.

In this story, Harry Potter’s parents were murdered when he was just a baby. With nowhere else to go, he was made to live with his mean aunt and uncle until he was 11 years old. Dumbledore tried to be positive about this by saying, “It’s the best place for him. His aunt and uncle will be able to explain everything to him when he is older” (Sorcerer’s stone p. 13). When later it is learned that he will not receive Dumbledore’s letter for a reason that his aunt and uncle didn’t want him to find out about him being a wizard. Potter grew up without magic and lead somewhat of a normal life. He was told his parents died in a car crash and he was the personal house cleaner for his aunt and uncle. He lived in a cupboard under the stairs and wore only his cousin’s big clothes that were raggedy. However, soon all this will change with a letter coming to the house and soon will find they can’t escape destiny.

Joseph Campbell had written a book that is still widely popular called, “The hero with a thousand faces.” In this book he wrote a detailed way that a hero went from being normal to a hero. In some cases, heroes were not normal but still fit in his theory. His overview of the hero’s journey is the separation or the departure, trials and victories, and the return. These three points are also detailed and provides a useful framework for many of the stories like Harry Potter (introduction to mythology p. 217-220).

Harry Potter had received a letter from Hogwarts except he didn’t know what that was. His uncle snatched it out of his hand and refused to give it to him. Soon, increasingly owls brought hundreds of letters to the point that they left to where no one could find them. They just didn’t except a giant named Hagrid to. This leads to the first stage in Campbells theory, separation, or departure. Hagrid knocked the door down and startled everyone to the point that the uncle had a shotgun. The uncle was still trying to get him to leave and do not say anything else but after some bickering between the two, Hagrid finally told Harry he was a wizard. “I’m a what?” is all he could say after hearing that news (sorcerer’s stone p.51). This is when the call to an adventure happens. He was finally told he was a wizard and now was invited to come with Hagrid on this journey to the wizarding world. Campbell state that occasionally the hero of the myth refuses the call (Introduction to mythology p. 220). This was not the case with Harry Potter. He knew in any world would be better than living with his aunt and uncle and was ready to go on this call to an adventure. Harry Potter had many supernatural aids along his journey. The first would be Hagrid and then the headmaster, Professor Dumbledore. The next stage of the hero’s journey would be crossing the threshold. Most would assume that at the end of the book and his first encounter with Voldemort would be his crossing the threshold. In this step, picking a wand in diagon alley could be considered crossing the threshold. Crossing the threshold is defined as leaving his ordinary world behind and crossing the threshold into an adventure (your dictionary). The wand is a symbol for a wizard and it is needed for that world. This is the first crossing that is done for young Harry Potter. In the belly of the whale stage, Campbell states that hero is swallowed up because he does not successfully conciliate the guardian of the threshold (introduction to mythology p. 221). Harry Potter as a “muggle” had died and was reborn a wizard once he stepped in their world. In a way this would be inside the belly of the whale.

The next main stage would be the road of trials. Campbell points out that one by one, the hero would complete a set of tasks (introduction of mythology p. 221). Throughout this book, Potter learned his father was a quidditch player and he played very well which Harry found out he was good too. He found a friend named Hermione, by trying to save her from a troll in the girl’s bathroom (sorcerer’s stone Halloween). Harry Potter soon found a mirror that when he investigated it, he saw his deepest desires which his parents were. He found himself thinking about the mirror and even showing his friend Ron. Soon Dumbledore found out and spoke with him on this mirror saying, “men have wasted away before it, entranced by what they had seen, or been driven mad, not knowing if what it shows is real or even possible” (sorcerer’s stone p. 213). During the school year, Potter and his friends found out about the stone. This stone can bring immortality to a life. They knew that the stone was in the castle and was guarded by a dog that Hagrid called Fluffy. The suspect that they thought was evil was professor Snape and he was the one helping to guard it. They decided to go after the stone, thinking it was in danger and will end up in the wrong hands. They got Hagrid talking, saying Fluffy likes music and he is calm if you play him some (sorcerer’s stone p. 266). This leads to a series of tests for Harry Potter. Potter also had his friends help in these tests which is not unusual for the hero’s journey. Potter and his friends did get past fluffy and dropped down the trap door below. This is when Hermione yelled at them, “Stop moving! I know what this is! It is Devils Snare!” (sorcerer’s stone p. 277). Thanks to Hermione, what they dropped into was a plant that was trying to swallow them up, but she got them out and now off to the next test. They heard wing like sounds and saw what they though were birds flying around above them. They soon figured out, they were flying keys and only one fit the door to the next room. Potter now able to fly on a broomstick, caught the one with a crumbled wing while hundreds of other keys went after him. They finally opened the door and without missing a beat Potter said, “ready? And his friends nodded, and he pulled the door open” (sorcerer’s stone p. 281). They saw in front of them what appeared to be a chess board which is Ron’s expertise. They played their way across the room and Ron got injured. The next test was a troll but the troll was already knocked out and so they went off to the next test. Hermione pointed out, “this isn’t magic. This is logic, a puzzle” (sorcerer’s stone p. 285). They needed to find which potion to drink using a puzzle that will get them through the fire. Hermione found it, but only enough for Harry. He indeed went through the door to the last test to get the stone and it was greater than the other ones. It was another professor and not Snape like Harry thought. Voldemort, the evil wizard who killed his parents and others was attached to this professor and telling him what to do. Voldemort tried to convince Harry to join him and can hope to see his parents again and can bring them back. Potter refused and ultimately beat the professor and Voldemort and got the stone (sorcerer’s stone chapter 17). The road of trials for Harry isn’t much different than other hero stories. They all had the same goal which is to beat the evil and then eventually, go back home.

Campbell had said that the “hero’s return may include different elements.” The hero can be so caught up in the new land that they may not want to return to the old land (introduction of mythology p. 224). This is the case for Harry Potter. He didn’t want to leave his new world and go back to be a slave to his aunt and uncle over the summer. He knew he was coming back but couldn’t stay because they were his only guardians and he was underage. What kept him in high spirits however, is knowing his friends were going to write to him throughout the summer and for once, he wouldn’t be forgotten. He traveled back through a magical train that can be called in the next step, the magical flight. The first book is amazing alone, but it also sets up Potters next adventures throughout his school years (Pounder, Sarah 2017). In a way he did become the masters of two worlds. Harry Potter told Hermione, “They don’t know we cannot use magic at home. I’m going to have a lot of fun with Dudley this summer” (sorcerer’s stone p.309). This makes him somewhat untouchable and does gear up for the next book for fans to see what he did to his family back at home.

The story of Harry Potter is a classic Hero’s journey. He crosses into an unknown world and finds friends and help along the way. He faced tests and trials throughout the year with trolls, enchanted mirrors, and evilness. He starts to become more than just a normal boy and finds his identity in this world. He went through lost and heart break but still found peace at the end of the journey to go on with his life.

Potter and the journey to become a hero. (2019, Dec 31). Retrieved from https://papersowl.com/examples/potter-and-the-journey-to-become-a-hero/

Archetypal Analysis of Harry Potter and the Sorcerer’s Stone