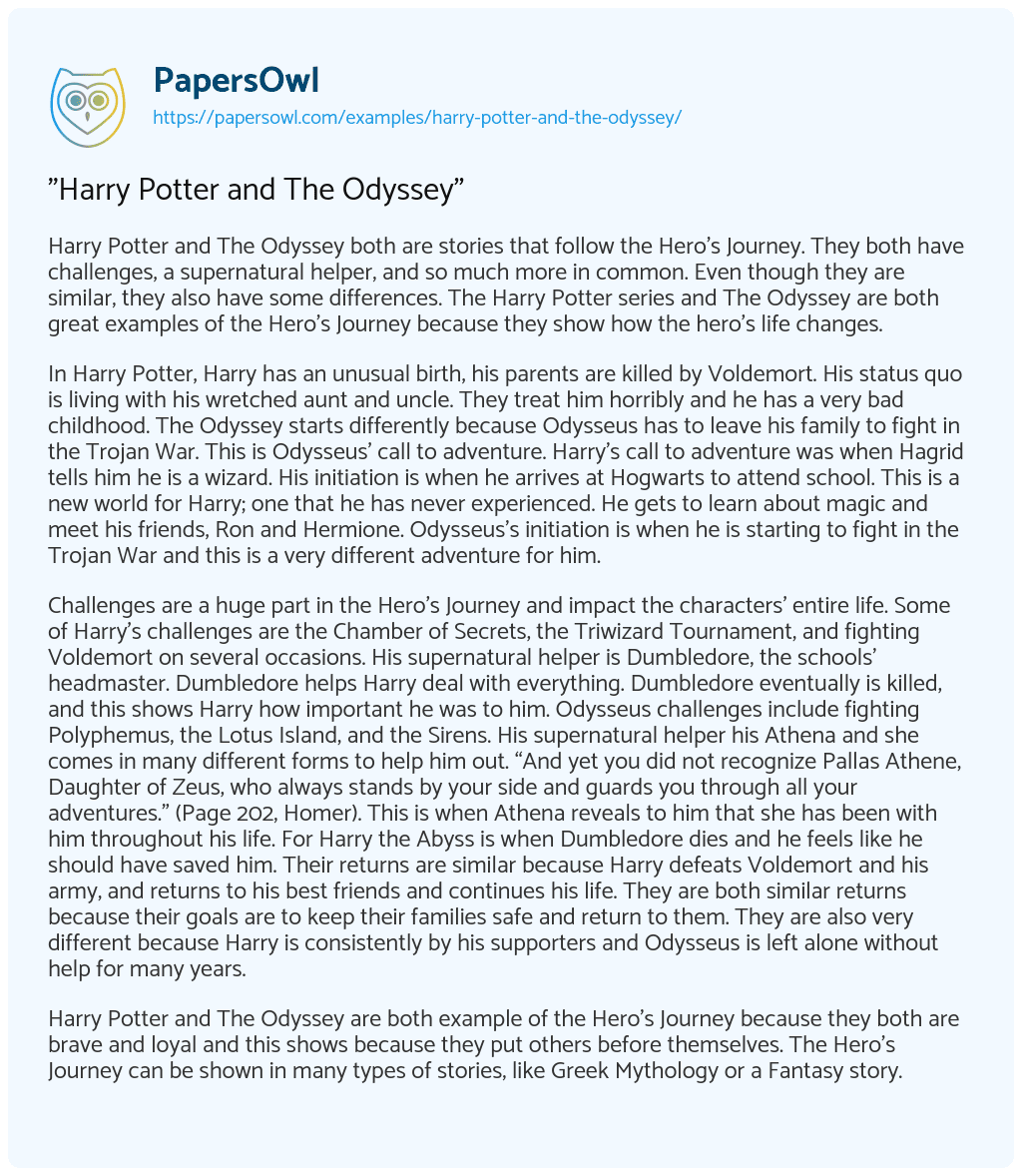 Harry Potter and The Odyssey both are stories that follow the Hero’s Journey. They both have challenges, a supernatural helper, and so much more in common. Even though they are similar, they also have some differences. The Harry Potter series and The Odyssey are both great examples of the Hero’s Journey because they show how the hero’s life changes.

In Harry Potter, Harry has an unusual birth, his parents are killed by Voldemort. His status quo is living with his wretched aunt and uncle. They treat him horribly and he has a very bad childhood. The Odyssey starts differently because Odysseus has to leave his family to fight in the Trojan War. This is Odysseus’ call to adventure. Harry’s call to adventure was when Hagrid tells him he is a wizard. His initiation is when he arrives at Hogwarts to attend school. This is a new world for Harry; one that he has never experienced. He gets to learn about magic and meet his friends, Ron and Hermione. Odysseus’s initiation is when he is starting to fight in the Trojan War and this is a very different adventure for him.

Challenges are a huge part in the Hero’s Journey and impact the characters’ entire life. Some of Harry’s challenges are the Chamber of Secrets, the Triwizard Tournament, and fighting Voldemort on several occasions. His supernatural helper is Dumbledore, the schools’ headmaster. Dumbledore helps Harry deal with everything. Dumbledore eventually is killed, and this shows Harry how important he was to him. Odysseus challenges include fighting Polyphemus, the Lotus Island, and the Sirens. His supernatural helper his Athena and she comes in many different forms to help him out. “And yet you did not recognize Pallas Athene, Daughter of Zeus, who always stands by your side and guards you through all your adventures.” (Page 202, Homer). This is when Athena reveals to him that she has been with him throughout his life. For Harry the Abyss is when Dumbledore dies and he feels like he should have saved him. Their returns are similar because Harry defeats Voldemort and his army, and returns to his best friends and continues his life. They are both similar returns because their goals are to keep their families safe and return to them. They are also very different because Harry is consistently by his supporters and Odysseus is left alone without help for many years.

"Harry Potter and The Odyssey". (2019, Sep 25). Retrieved from https://papersowl.com/examples/harry-potter-and-the-odyssey/

About Harry Potter and the Goblet of Fire