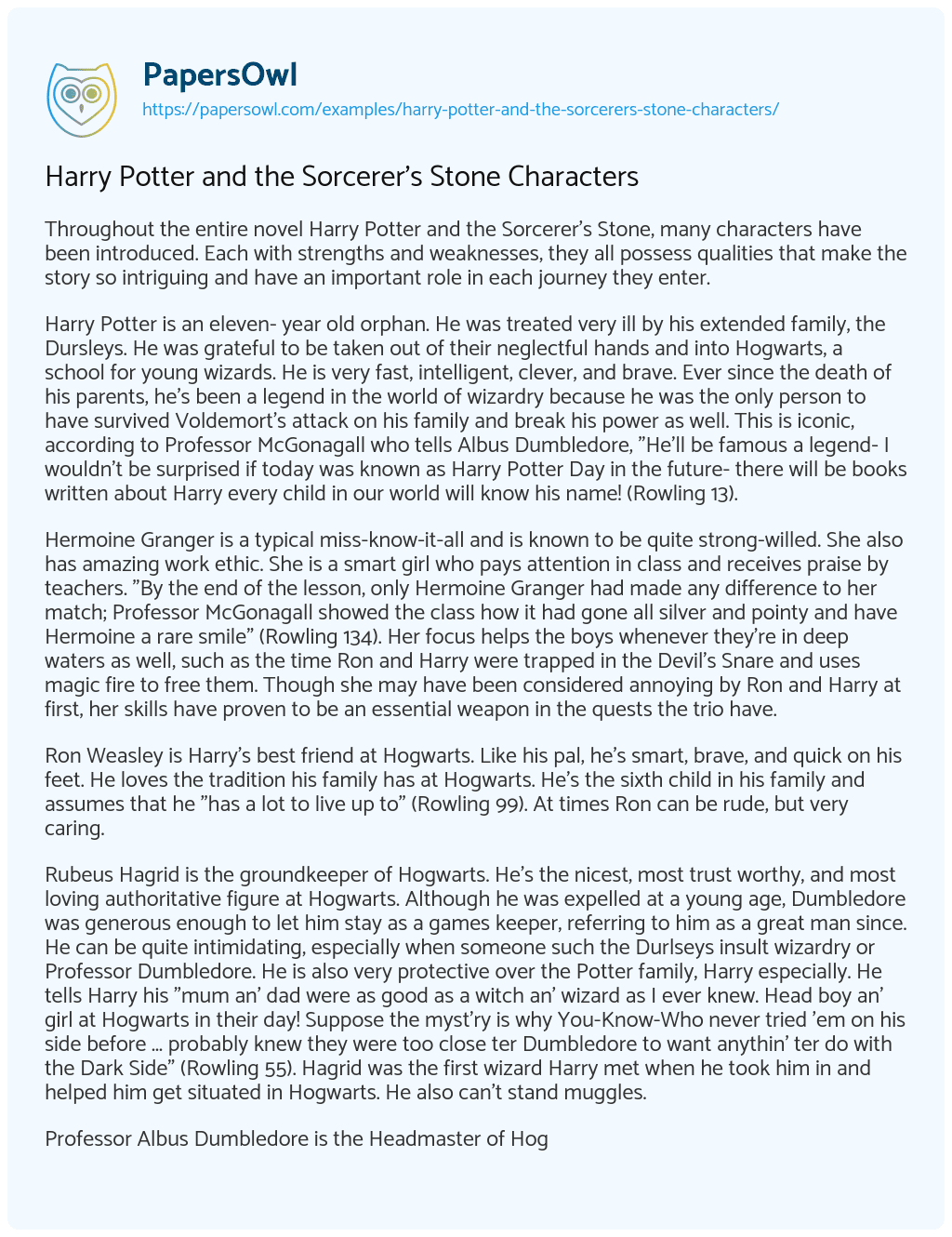 Throughout the entire novel Harry Potter and the Sorcerer’s Stone, many characters have been introduced. Each with strengths and weaknesses, they all possess qualities that make the story so intriguing and have an important role in each journey they enter.

Harry Potter is an eleven- year old orphan. He was treated very ill by his extended family, the Dursleys. He was grateful to be taken out of their neglectful hands and into Hogwarts, a school for young wizards. He is very fast, intelligent, clever, and brave. Ever since the death of his parents, he’s been a legend in the world of wizardry because he was the only person to have survived Voldemort’s attack on his family and break his power as well. This is iconic, according to Professor McGonagall who tells Albus Dumbledore, “He’ll be famous a legend- I wouldn’t be surprised if today was known as Harry Potter Day in the future- there will be books written about Harry every child in our world will know his name! (Rowling 13).

Hermoine Granger is a typical miss-know-it-all and is known to be quite strong-willed. She also has amazing work ethic. She is a smart girl who pays attention in class and receives praise by teachers. “By the end of the lesson, only Hermoine Granger had made any difference to her match; Professor McGonagall showed the class how it had gone all silver and pointy and have Hermoine a rare smile” (Rowling 134). Her focus helps the boys whenever they’re in deep waters as well, such as the time Ron and Harry were trapped in the Devil’s Snare and uses magic fire to free them. Though she may have been considered annoying by Ron and Harry at first, her skills have proven to be an essential weapon in the quests the trio have.

Ron Weasley is Harry’s best friend at Hogwarts. Like his pal, he’s smart, brave, and quick on his feet. He loves the tradition his family has at Hogwarts. He’s the sixth child in his family and assumes that he “has a lot to live up to” (Rowling 99). At times Ron can be rude, but very caring.

Rubeus Hagrid is the groundkeeper of Hogwarts. He’s the nicest, most trust worthy, and most loving authoritative figure at Hogwarts. Although he was expelled at a young age, Dumbledore was generous enough to let him stay as a games keeper, referring to him as a great man since. He can be quite intimidating, especially when someone such the Durlseys insult wizardry or Professor Dumbledore. He is also very protective over the Potter family, Harry especially. He tells Harry his “mum an’ dad were as good as a witch an’ wizard as I ever knew. Head boy an’ girl at Hogwarts in their day! Suppose the myst’ry is why You-Know-Who never tried ’em on his side before … probably knew they were too close ter Dumbledore to want anythin’ ter do with the Dark Side” (Rowling 55). Hagrid was the first wizard Harry met when he took him in and helped him get situated in Hogwarts. He also can’t stand muggles.

Professor Albus Dumbledore is the Headmaster of Hogwarts. “Considered by many the greatest wizard of modern times, Dumbledore is particularly famous for his defeat of the Dark wizard Grindelwald in 1945, for the discovery of the twelve uses of dragon’s blood, and his work on alchemy with his partner, Nicholas Flamel. Professor Dumbledore enjoys chamber music and tenpin bowling” (Rowling 102,103). He is wise, brave, and generous.

Voldemort is one the antagonist of Harry Potter and the Sorcerer’s Stone. He’s known for wanting the powers Dumbledore has. Often referred to as” You-Know-Who”, “He-Who -Must-Not-Be-Named, and rarely just “Voldemort”, he’s responsible for the death of Lily and James Potter. He’s also responsible for the legendary status of their son, Harry as well since he was the only one to have survive the attack and break the evil powers of Voldemort. He disappeared afterwards. He is also a member of the Slytherin House, much to Hagrid’s dismay. As “there’s not a single witch or wizard who went bad who wasn’t in Slytherin” (Rowling 80).

Draco Malfoy is one of the bullies Harry meets attending Hogwarts. He is “a boy with a pale, pointed face” (Rowling 77). He comes from a wealthy family with dark history. Although he’s not as dark as they are, he has a tendency to use magic for cruel and immature reasons. Ironically, he is a Slytherin, as his family has a long history of being in that house. He can be very rude as “Harry was strong reminded of Dudley” (Rowley 77) when he first ran into him at Madam’s Malkin’s Robes for All Occasions.

Professor Minerva McGonagall is a professor of Hogwarts and Head of the Gryffindor House. Teaching Transfiguration, she “wasn’t a teacher to cross” (Rowling 133). Strict and clever, she deeply cares about Harry, being the cat waiting outside the Dursleys’ house for Harry’s arrival after his parents’ deaths.

Professor Severus Snape is a professor in charge of teaching Potions at Hogwarts. He strongly dislikes Harry, introducing him as, “Our new celebrity” (Rowling 136). Harry always felt uncomfortable around Snopes, “His eyes were black like Hagrid’s, but they had none of Hagrid’s warmth. They were cold and empty and made you think of dark tunnels” (Rowling 136). The reason is James Potter, Harry’s father, saved his life once, never being able to forgive him for doing so. As a result, he takes his anger out on his son. He’s hard on all Gryffindor students but harder on Harry and his friends. Unlike Professor McGonagall, he is unfair and cruel.

In conclusion, all of the characters have a unique purpose in the franchise. While some are larger than others, they all make the story interesting one way or another. Each of them play a special role in the story as they go along in casting spells, winning against monster and villains.

Archetypal Analysis of Harry Potter and the Sorcerer’s Stone

About Harry Potter and the Goblet of Fire