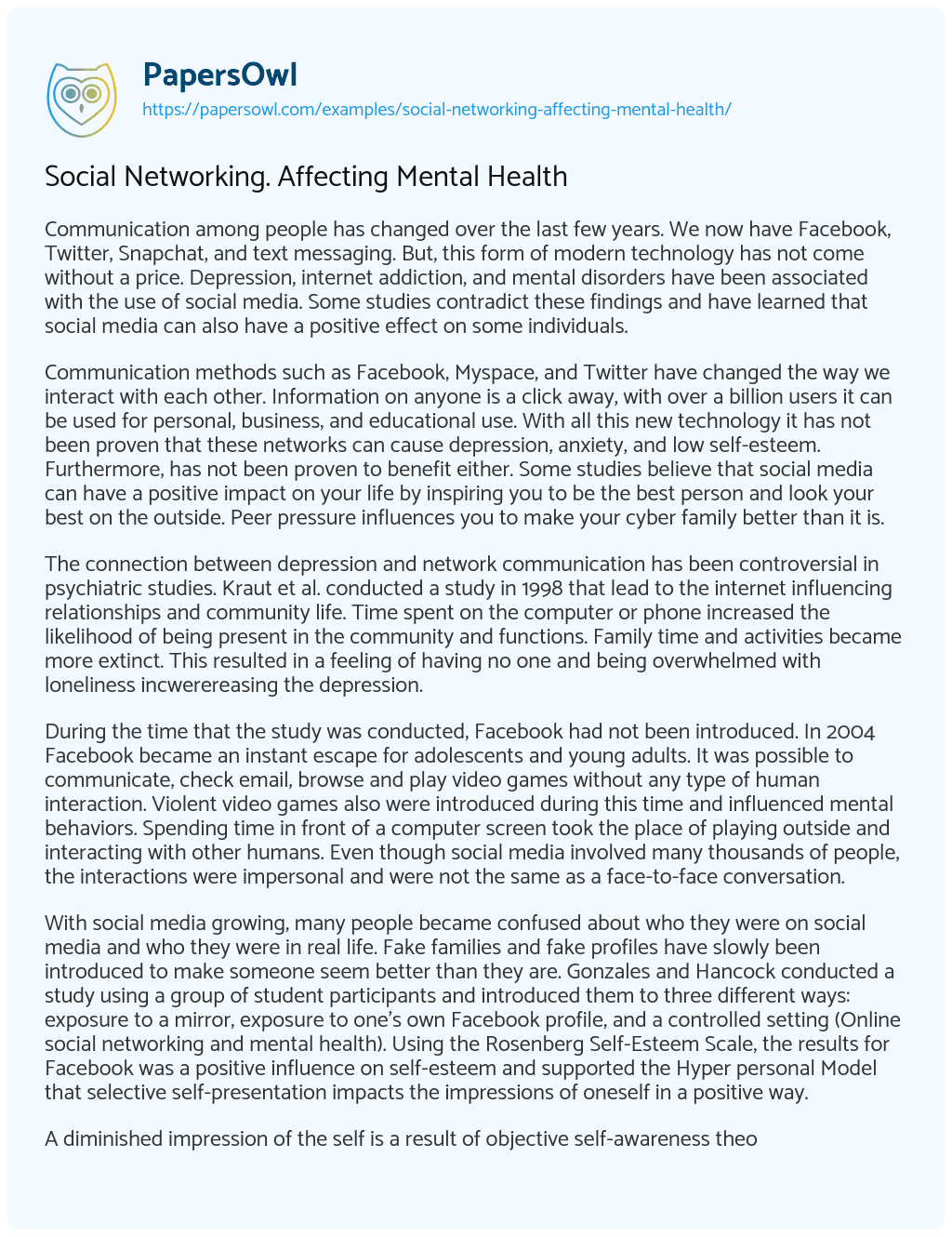 Communication among people has changed over the last few years. We now have Facebook, Twitter, Snapchat, and text messaging. But, this form of modern technology has not come without a price. Depression, internet addiction, and mental disorders have been associated with the use of social media. Some studies contradict these findings and have learned that social media can also have a positive effect on some individuals.

Communication methods such as Facebook, Myspace, and Twitter have changed the way we interact with each other. Information on anyone is a click away, with over a billion users it can be used for personal, business, and educational use. With all this new technology it has not been proven that these networks can cause depression, anxiety, and low self-esteem. Furthermore, has not been proven to benefit either. Some studies believe that social media can have a positive impact on your life by inspiring you to be the best person and look your best on the outside. Peer pressure influences you to make your cyber family better than it is.

The connection between depression and network communication has been controversial in psychiatric studies. Kraut et al. conducted a study in 1998 that lead to the internet influencing relationships and community life. Time spent on the computer or phone increased the likelihood of being present in the community and functions. Family time and activities became more extinct. This resulted in a feeling of having no one and being overwhelmed with loneliness incwerereasing the depression.

During the time that the study was conducted, Facebook had not been introduced. In 2004 Facebook became an instant escape for adolescents and young adults. It was possible to communicate, check email, browse and play video games without any type of human interaction. Violent video games also were introduced during this time and influenced mental behaviors. Spending time in front of a computer screen took the place of playing outside and interacting with other humans. Even though social media involved many thousands of people, the interactions were impersonal and were not the same as a face-to-face conversation.

With social media growing, many people became confused about who they were on social media and who they were in real life. Fake families and fake profiles have slowly been introduced to make someone seem better than they are. Gonzales and Hancock conducted a study using a group of student participants and introduced them to three different ways: exposure to a mirror, exposure to one’s own Facebook profile, and a controlled setting (Online social networking and mental health). Using the Rosenberg Self-Esteem Scale, the results for Facebook was a positive influence on self-esteem and supported the Hyper personal Model that selective self-presentation impacts the impressions of oneself in a positive way.

A diminished impression of the self is a result of objective self-awareness theory. This causes the self to become the object, not the subject of consciousness. These stimuli include looking at oneself in a mirror, hearing one’s voice, writing one’s curriculum vitae, or any other situation during which the subject’s attention focuses on the self (Online social networking and mental health). The result would be someone that who uses Facebook would be addicted to looking at their page and pictures, constantly checking email and status. Studies show that all these things could lead to the short- or long-term demise of self-esteem. Individuals have found it easier to comment or insult another person on social media than in a face-to-face altercation.

Addiction to being online is common with someone that checks Facebook, Twitter, Snapchat, and other social media outlets. Addiction to social media is a mental disorder and is more common than first thought. After many studies have been conducted, it has been made clear that chronic Facebook users have problems functioning in a normal lifestyle. Three addiction diagnoses have been identified known as the SNS disorders, they are internet addiction disorder, problematic internet use, and compulsive internet use. These diagnoses are often seen with more symptoms such as depression, personality disorders, and other mental illnesses.

The following are all reasons that social media could hurt an adolescent’s mental health. Cyberbullying has become more of a focus with social media being popular among teens. Adolescents are more obsessed with “likes” and “friends” on Facebook. This makes them more vulnerable for cyberbullying. Teens have an easier time intimidating or threatening others on social media because they don’t have to see them in person and it is easy to hide behind a screen. As a result of threatening or harassing someone on the computer, there has been a need to label these people as cyberbullies.

Collecting fake friends can also be a problem. People will be your friend on Facebook to have access to your information and your personal life. It is hard to determine if someone is a real friend or a fake friend. This happens even with the privacy button activated.

Focusing on “likes” can influence your feelings about yourself and the people in your life. Posting pictures or videos of yourself and your family on your social media page will result in comments and likes. The lack of “likes” can hurt your mental health. Avoid negative behaviors to gain alike.

Less personal interaction is the result of social media. Facetime and skype have taken the place of personal conversations. Human interactions, personal phone calls, and visits are necessary for our human actions and can not be replaced with social media.

The solution to this problem is to make sure that young people still interact and have family and friends time together with no electronic devices. In the world today, we have lost the personal touch that comes with face-to-face interactions. The internet opens a new world of learning, communication, and relationships. There is a happy medium between the two. You can have your internet and your relationships if you can balance the two. Don’t let Facebook, Twitter, and Snapchat take over your life to the extent that you do not have any personal relationships. Society has lost the personal touch in their communications and relationships. Don’t rely on text messages and personal messaging to relay something you want to say. Personal skills are needed throughout life and without them, we become a society without feelings or empathy.

Ellen DeGeneres made an interesting statement about texting instead of calling. Quote: “What’s not so great is that all this technology is destroying our social skills. Not only have we given up on writing letters to each other, we barely even talk to each other. People have become so accustomed to texting that they’re startled when the phone rings. It’s like we suddenly all have Bat phones. If it rings, there must be a danger. Now we answer, “What happened? Is someone tied up in the old sawmill?” “No, it’s Becky. I just called to say hi.” “Well you scared me half to death. You can’t just pick up the phone and try to talk to me like that. Don’t the tips of your fingers work?” (DeGeneres). That sums up how our society works.

The Negative Effects of Social Media on Mental Health