How did Alabamians Respond to the U.S. Supreme Court Decision Brown V. Board? 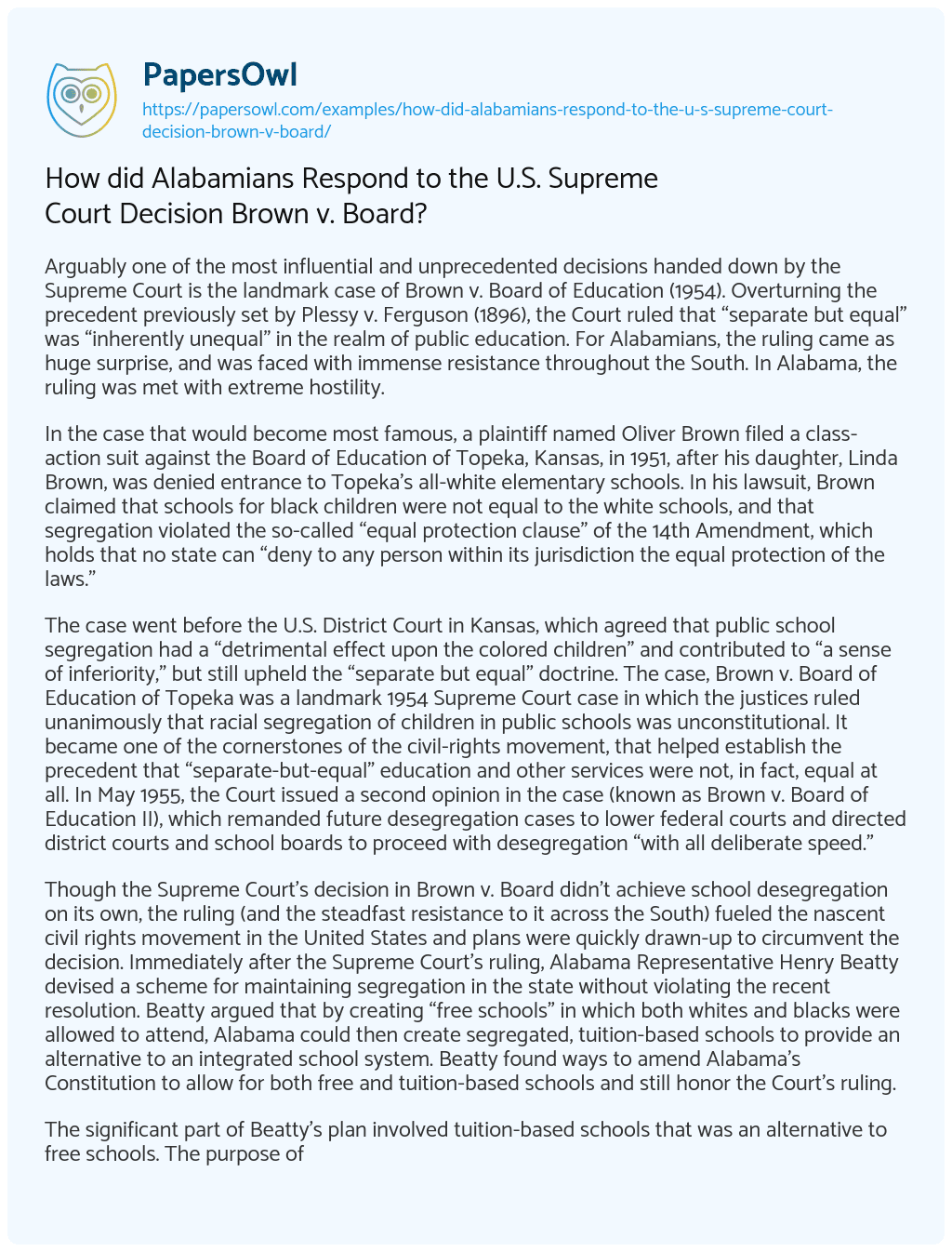 Arguably one of the most influential and unprecedented decisions handed down by the Supreme Court is the landmark case of Brown v. Board of Education (1954). Overturning the precedent previously set by Plessy v. Ferguson (1896), the Court ruled that “separate but equal” was “inherently unequal” in the realm of public education. For Alabamians, the ruling came as huge surprise, and was faced with immense resistance throughout the South. In Alabama, the ruling was met with extreme hostility.

In the case that would become most famous, a plaintiff named Oliver Brown filed a class-action suit against the Board of Education of Topeka, Kansas, in 1951, after his daughter, Linda Brown, was denied entrance to Topeka’s all-white elementary schools. In his lawsuit, Brown claimed that schools for black children were not equal to the white schools, and that segregation violated the so-called “equal protection clause” of the 14th Amendment, which holds that no state can “deny to any person within its jurisdiction the equal protection of the laws.”

The case went before the U.S. District Court in Kansas, which agreed that public school segregation had a “detrimental effect upon the colored children” and contributed to “a sense of inferiority,” but still upheld the “separate but equal” doctrine. The case, Brown v. Board of Education of Topeka was a landmark 1954 Supreme Court case in which the justices ruled unanimously that racial segregation of children in public schools was unconstitutional. It became one of the cornerstones of the civil-rights movement, that helped establish the precedent that “separate-but-equal” education and other services were not, in fact, equal at all. In May 1955, the Court issued a second opinion in the case (known as Brown v. Board of Education II), which remanded future desegregation cases to lower federal courts and directed district courts and school boards to proceed with desegregation “with all deliberate speed.”

Though the Supreme Court’s decision in Brown v. Board didn’t achieve school desegregation on its own, the ruling (and the steadfast resistance to it across the South) fueled the nascent civil rights movement in the United States and plans were quickly drawn-up to circumvent the decision. Immediately after the Supreme Court’s ruling, Alabama Representative Henry Beatty devised a scheme for maintaining segregation in the state without violating the recent resolution. Beatty argued that by creating “free schools” in which both whites and blacks were allowed to attend, Alabama could then create segregated, tuition-based schools to provide an alternative to an integrated school system. Beatty found ways to amend Alabama’s Constitution to allow for both free and tuition-based schools and still honor the Court’s ruling.

The significant part of Beatty’s plan involved tuition-based schools that was an alternative to free schools. The purpose of this plan was to enable white students to stay in white-only schools by paying a “nominal fee” for the purpose of differentiating the school from a free, public school. White students who had financial needs had their tuition waived rather than be forced to attend a free, integrated school. Beatty insisted on dodging integrating public schools in Alabama; he was not alone in rejecting the Court’s ruling.

Most of the South demonstrated extreme resistance to the Brown ruling, and in the following decade, little efforts were made to integrate public schools. Some historians argue that the Court’s ruling resulted in a “backlash” in the South, and that without the Brown ruling, desegregation would have eventually taken place without the open violence and hostility that followed.

In 1955, a year after the Brown v. Board of Education decision, Rosa Parks refused to give up her seat on a Montgomery, Alabama bus. Her arrest sparked the Montgomery bus boycott and led to other boycotts, sit-ins and demonstrations (many of them led by Martin Luther King Jr.), in a movement that would eventually lead to the toppling of Jim Crow laws across the South that enforced racial segregation.

Beatty was insistent up preventing desegregation of public schools in Alabama. Though much of the South rallied against Brown, it would be a decade before Congress would pass legislation to put an end to segregation with the Civil Rights Act of 1964. I believe that the Court did more harm than good with its ruling in Brown.

The public responded as the issue contributed to the rising white voter participation that increased 400% from 1954 to 1966. However, on May 4, 1961, a bus carrying black and white anti-segregation activists called the Freedom Riders rolled into Alabama and was immediately attacked by members of the Ku Klux Klan (KKK).

Churches also voiced their concerns to political leaders. Pastor, John Rutland from the Central Methodist Church in Decatur, Alabama wrote Governor-Elect George C. Wallace to share his congregation’s objections to the Federal Government’s stand on de-segregation. Rutland also related how the dominating church membership who were primarily Democrats did not agree with the Democratic National Party.

Also, Jerry A. Tanton, pastor of Pine Grove – Ebenezer Methodist Charge wrote Wallace on November 4, 1962 encouraging him to begin a program of preparation to prevent lawlessness, discord, violence, and blood-shed on school campuses throughout Alabama. Tanton also relayed that he and his congregation did not approve of integrated schools and abhorred the idea of repeating the crisis that affected Mississippi.

On June 11, 1963, Alabama Governor George Wallace defiantly stood in the schoolhouse door at the University of Alabama in a vain attempt to block the entrance of two black students. The steadfast goal of the two black students, Vivian Malone and Jimmy Hood, was to integrate the University of Alabama which had been racially segregated for 132 years. Wallace was instructed by federal troops to step aside and allow Malone and Hood to enroll at the University in compliance with a federal court order. The University of Alabama became officially integrated when Wallace obeyed the court order by removing himself from the door of the administration building. Three decades later, there continue to be legal and political storm blowing through Alabama centered on the question as to whether real desegregation has occurred in the state’s colleges and universities. Moreover, this storm is not limited to Alabama. The same issues historically black colleges and public universities exist. The legal questions to be addressed revolve around the issue of whether these states continue to operate racially dual and

Wallace wasn’t the only governor who stood firm against desegregation; Governor Orval Faubus of Arkansas called out the state National Guard to prevent black students from attending high school in Little Rock in 1957. After a tense standoff, President Eisenhower deployed federal troops, and nine students—known as the “Little Rock Nine”—were able to enter Central High School under armed guard.

The passing of the Civil Rights Act of 1964, was enforced by the Justice Department and began the process of desegregation in earnest. This legislation was followed by the Voting Rights Act of 1965 and the Fair Housing Act of 1968. In 1976, the Supreme Court issued another landmark decision in Runyon v. McCrary, ruling that even private, nonsectarian schools that denied admission to students on the basis of race violated federal civil rights laws.

Today, more than 60 years after Brown v. Board of Education, the debate continues over how to combat racial inequalities in the nation’s school system, largely based on residential patterns and differences in resources between schools in wealthier and economically disadvantaged districts across the country. The debate resonates how for Alabamians, the ruling in the Brown case came with immense resistance throughout the South and met with extreme hostility.

How did Alabamians Respond to the U.S. Supreme Court Decision Brown v. Board?. (2021, Feb 26). Retrieved from https://papersowl.com/examples/how-did-alabamians-respond-to-the-u-s-supreme-court-decision-brown-v-board/

Essay about Brown V. Board of Education