Causes and Effects of Brown V. Board 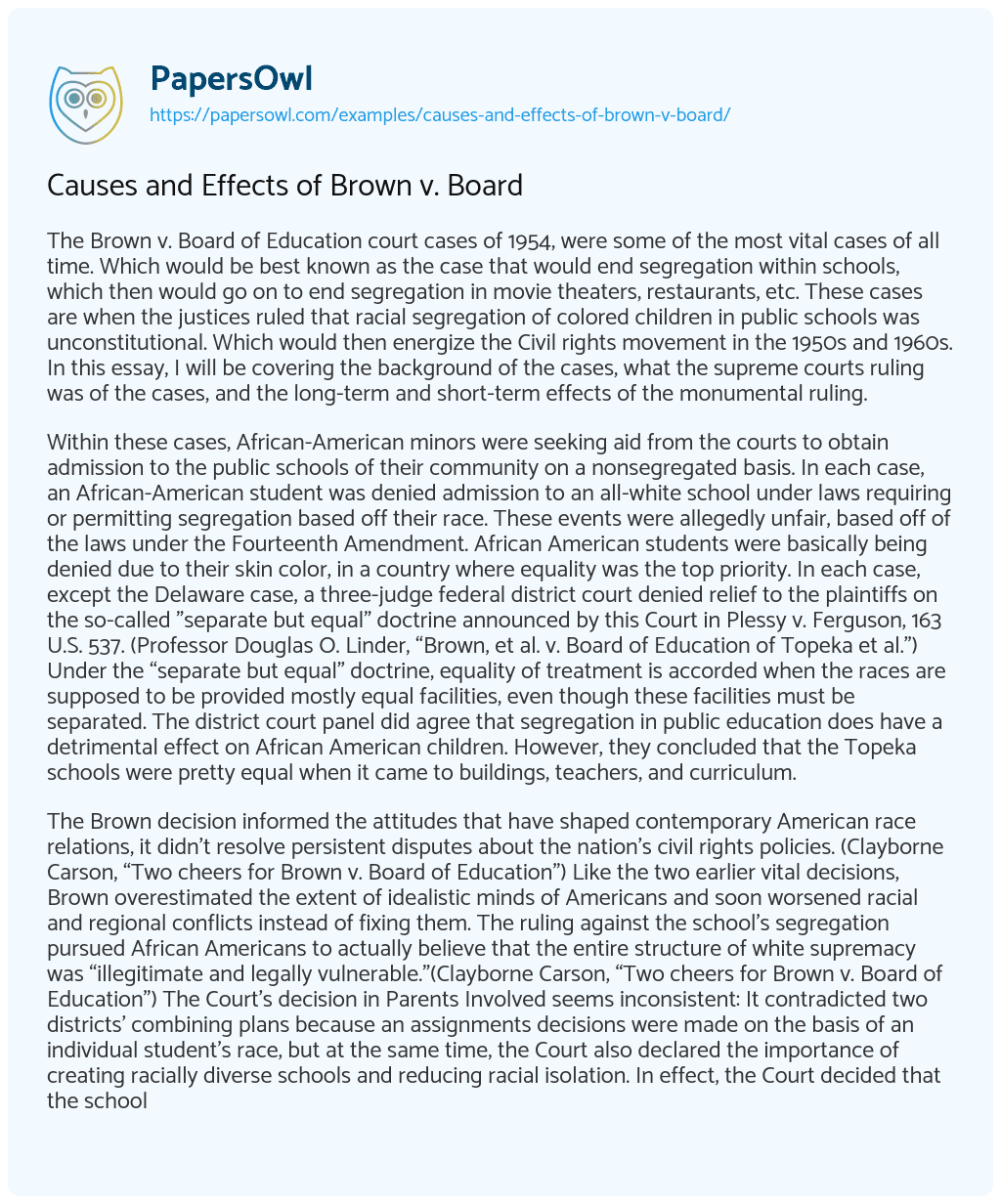 The Brown v. Board of Education court cases of 1954, were some of the most vital cases of all time. Which would be best known as the case that would end segregation within schools, which then would go on to end segregation in movie theaters, restaurants, etc. These cases are when the justices ruled that racial segregation of colored children in public schools was unconstitutional. Which would then energize the Civil rights movement in the 1950s and 1960s. In this essay, I will be covering the background of the cases, what the supreme courts ruling was of the cases, and the long-term and short-term effects of the monumental ruling.

Within these cases, African-American minors were seeking aid from the courts to obtain admission to the public schools of their community on a nonsegregated basis. In each case, an African-American student was denied admission to an all-white school under laws requiring or permitting segregation based off their race. These events were allegedly unfair, based off of the laws under the Fourteenth Amendment. African American students were basically being denied due to their skin color, in a country where equality was the top priority. In each case, except the Delaware case, a three-judge federal district court denied relief to the plaintiffs on the so-called “separate but equal” doctrine announced by this Court in Plessy v. Ferguson, 163 U.S. 537. (Professor Douglas O. Linder, “Brown, et al. v. Board of Education of Topeka et al.”) Under the “separate but equal” doctrine, equality of treatment is accorded when the races are supposed to be provided mostly equal facilities, even though these facilities must be separated. The district court panel did agree that segregation in public education does have a detrimental effect on African American children. However, they concluded that the Topeka schools were pretty equal when it came to buildings, teachers, and curriculum.

The Brown decision informed the attitudes that have shaped contemporary American race relations, it didn’t resolve persistent disputes about the nation’s civil rights policies. (Clayborne Carson, “Two cheers for Brown v. Board of Education”) Like the two earlier vital decisions, Brown overestimated the extent of idealistic minds of Americans and soon worsened racial and regional conflicts instead of fixing them. The ruling against the school’s segregation pursued African Americans to actually believe that the entire structure of white supremacy was “illegitimate and legally vulnerable.”(Clayborne Carson, “Two cheers for Brown v. Board of Education”) The Court’s decision in Parents Involved seems inconsistent: It contradicted two districts’ combining plans because an assignments decisions were made on the basis of an individual student’s race, but at the same time, the Court also declared the importance of creating racially diverse schools and reducing racial isolation. In effect, the Court decided that the schools should now try to achieve racial integration using policies that reduce the reliance on an individual student’s race or ethnicity as a factor in school assignments. The Brown v. Board of Education case declared that state laws segregating students by race had to be “inherently unequal,” which stands as one of the most important decisions in the nation’s history. (Jeremy Anderson and Erica Frankenberg, “Voluntary integration in uncertain times”)

Based on the ruling, there are many long-term as well as short-term effects upon the school systems. Due to the struggles of the civil rights, Brown inspired sought broader goals than the decision could deliver, and that the gap stimulated frustration among many black men. The decisions virtues and limitations reflect both the achievements and the failures of the efforts made in the last half-century to solve America’s racial issues and to realize the nations egalitarian ideas. Also, the number of African educators in the U.S. has declined over the past 65 years, while public school populations have become more diverse. (Martha Lash and Monica Ratcliffe, “The Journey of an African American Teacher Before and After Brown v. Board of education”) The cause of the decline of African American teachers is mostly unknown, but it’s terrible to see how hard their ancestors fought just to see everything go downhill. Lastly, a positive effect due to Brown v. Board of Education is that this decision became an important event of the end of a struggle against racial segregation in the United States. The Brown case proved that there is no way to separate others based on one’s race inside a democratic society. (Mark Tushnet, “The significance of Brown v. Board of Education”)

The Brown v. Board court case was, in fact, one of the most relieving court cases in history for African Americans. Everything was against the odds for negros. Making everything basically unfair and segregated during this time period. It was a monumental court case, due to the fact that segregation within schools had been removed. Every school would now become interracial, and everyone would “seemingly” have the same opportunities. Which would then leave long-term and short-term effects, abolishing racial segregation and leaving equal opportunity for each and every student.

Causes and Effects of Brown v. Board. (2020, Dec 15). Retrieved from https://papersowl.com/examples/causes-and-effects-of-brown-v-board/

Brown V. Board of Education and Civil Rights