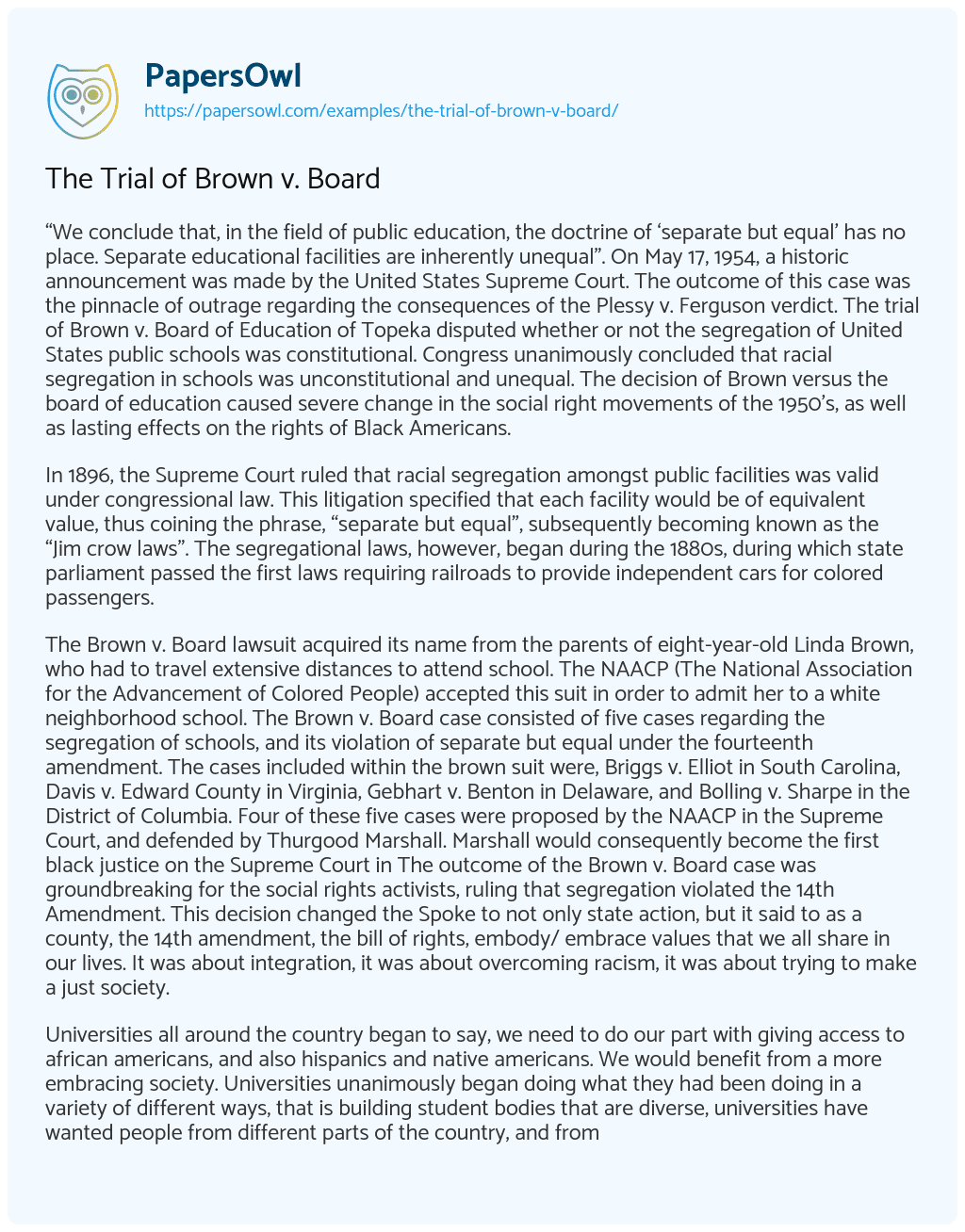 “We conclude that, in the field of public education, the doctrine of ‘separate but equal’ has no place. Separate educational facilities are inherently unequal”. On May 17, 1954, a historic announcement was made by the United States Supreme Court. The outcome of this case was the pinnacle of outrage regarding the consequences of the Plessy v. Ferguson verdict. The trial of Brown v. Board of Education of Topeka disputed whether or not the segregation of United States public schools was constitutional. Congress unanimously concluded that racial segregation in schools was unconstitutional and unequal. The decision of Brown versus the board of education caused severe change in the social right movements of the 1950’s, as well as lasting effects on the rights of Black Americans.

In 1896, the Supreme Court ruled that racial segregation amongst public facilities was valid under congressional law. This litigation specified that each facility would be of equivalent value, thus coining the phrase, “separate but equal”, subsequently becoming known as the “Jim crow laws”. The segregational laws, however, began during the 1880s, during which state parliament passed the first laws requiring railroads to provide independent cars for colored passengers.

The Brown v. Board lawsuit acquired its name from the parents of eight-year-old Linda Brown, who had to travel extensive distances to attend school. The NAACP (The National Association for the Advancement of Colored People) accepted this suit in order to admit her to a white neighborhood school. The Brown v. Board case consisted of five cases regarding the segregation of schools, and its violation of separate but equal under the fourteenth amendment. The cases included within the brown suit were, Briggs v. Elliot in South Carolina, Davis v. Edward County in Virginia, Gebhart v. Benton in Delaware, and Bolling v. Sharpe in the District of Columbia. Four of these five cases were proposed by the NAACP in the Supreme Court, and defended by Thurgood Marshall. Marshall would consequently become the first black justice on the Supreme Court in The outcome of the Brown v. Board case was groundbreaking for the social rights activists, ruling that segregation violated the 14th Amendment. This decision changed the Spoke to not only state action, but it said to as a county, the 14th amendment, the bill of rights, embody/ embrace values that we all share in our lives. It was about integration, it was about overcoming racism, it was about trying to make a just society.

Universities all around the country began to say, we need to do our part with giving access to african americans, and also hispanics and native americans. We would benefit from a more embracing society. Universities unanimously began doing what they had been doing in a variety of different ways, that is building student bodies that are diverse, universities have wanted people from different parts of the country, and from all around the world because it is very important that young people come together and study and be educated in an environment where there are people whom they may have stereotypes or may not know them and they need to get to know the different types of people in the world. Brown was more than simply integrating some schools in the south, it was about america and its ideals, and much has been done. Every part of american society has ‘internalized’ the need to work on integration and to overcome the past.

The Brown v. Board hearing provoked extensive developments in education, community welfare, and political theory throughout the twentieth century, and continues to change the life of all american citizens today. The Although segregation was once a standard in american society, the decision made on May 17, 1954 forever changed societal standards and greatly impacted the freedom of Black Americans.

The Trial of Brown v. Board. (2021, Apr 08). Retrieved from https://papersowl.com/examples/the-trial-of-brown-v-board/