Getting Fired from Apple 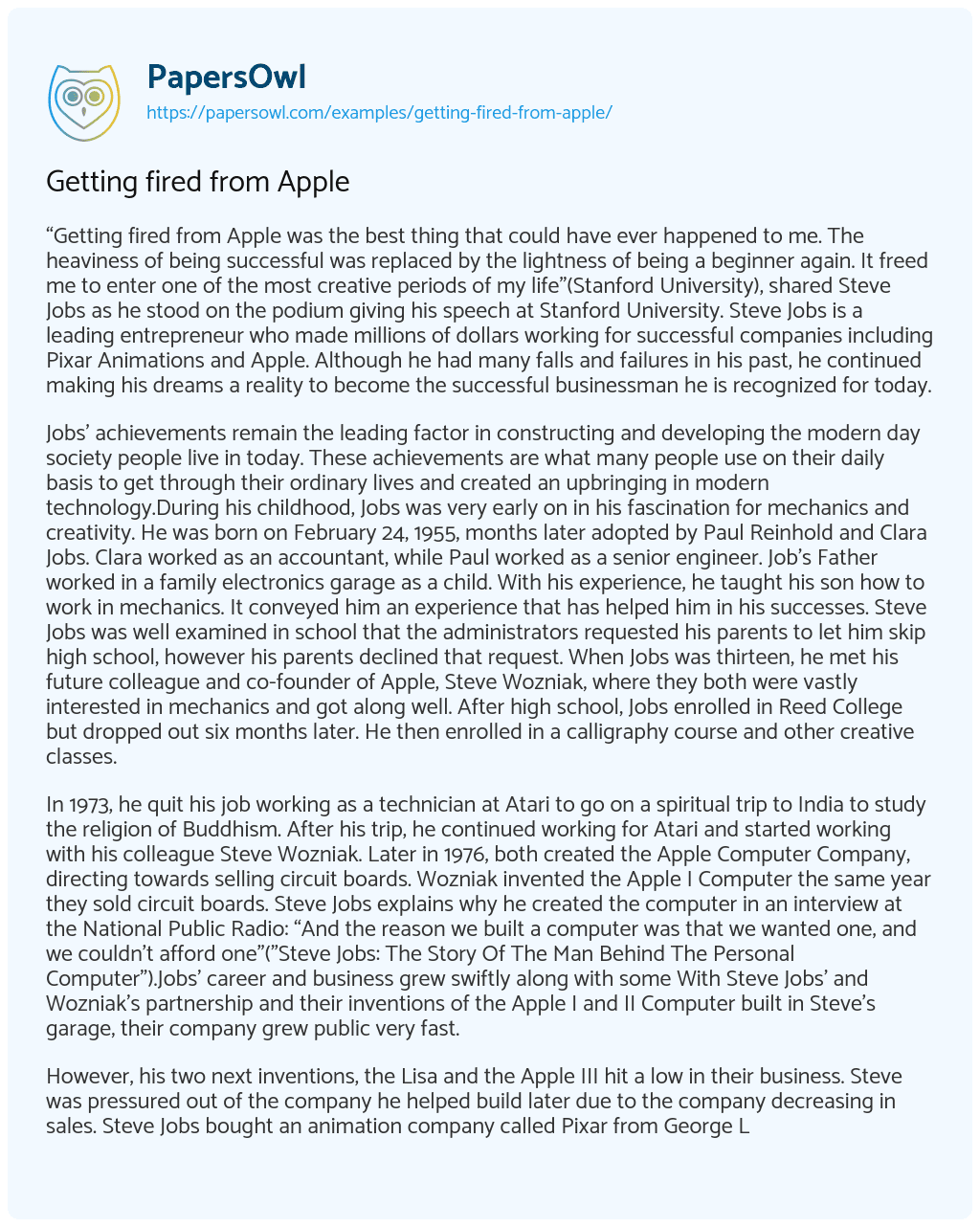 “Getting fired from Apple was the best thing that could have ever happened to me. The heaviness of being successful was replaced by the lightness of being a beginner again. It freed me to enter one of the most creative periods of my life”(Stanford University), shared Steve Jobs as he stood on the podium giving his speech at Stanford University. Steve Jobs is a leading entrepreneur who made millions of dollars working for successful companies including Pixar Animations and Apple. Although he had many falls and failures in his past, he continued making his dreams a reality to become the successful businessman he is recognized for today.

Jobs’ achievements remain the leading factor in constructing and developing the modern day society people live in today. These achievements are what many people use on their daily basis to get through their ordinary lives and created an upbringing in modern technology.During his childhood, Jobs was very early on in his fascination for mechanics and creativity. He was born on February 24, 1955, months later adopted by Paul Reinhold and Clara Jobs. Clara worked as an accountant, while Paul worked as a senior engineer. Job’s Father worked in a family electronics garage as a child. With his experience, he taught his son how to work in mechanics. It conveyed him an experience that has helped him in his successes. Steve Jobs was well examined in school that the administrators requested his parents to let him skip high school, however his parents declined that request. When Jobs was thirteen, he met his future colleague and co-founder of Apple, Steve Wozniak, where they both were vastly interested in mechanics and got along well. After high school, Jobs enrolled in Reed College but dropped out six months later. He then enrolled in a calligraphy course and other creative classes.

In 1973, he quit his job working as a technician at Atari to go on a spiritual trip to India to study the religion of Buddhism. After his trip, he continued working for Atari and started working with his colleague Steve Wozniak. Later in 1976, both created the Apple Computer Company, directing towards selling circuit boards. Wozniak invented the Apple I Computer the same year they sold circuit boards. Steve Jobs explains why he created the computer in an interview at the National Public Radio: “And the reason we built a computer was that we wanted one, and we couldn’t afford one”(“Steve Jobs: The Story Of The Man Behind The Personal Computer”).Jobs’ career and business grew swiftly along with some With Steve Jobs’ and Wozniak’s partnership and their inventions of the Apple I and II Computer built in Steve’s garage, their company grew public very fast.

However, his two next inventions, the Lisa and the Apple III hit a low in their business. Steve was pressured out of the company he helped build later due to the company decreasing in sales. Steve Jobs bought an animation company called Pixar from George Lucas and created major hit movies in 1986. Apple sales in the Macintosh started decreasing due to its competition Microsoft creating the Windows 95 while Pixar was a success. The company went to Jobs and persuaded him to buy the Apple company if he paid about 400 million dollars, in which Jobs agreed to. Steve Jobs was back his founding business. He had produced his first product back in the company, the iMac, which was an enormous success. After he came back to his founding company, the Apple sales have soared and became a multi-billion dollar company.

Although his products were incredibly successful, Jobs died on October 5th, 2011 due to his pancreatic cancer and feeble health, however, his legacy lives on.Steve Jobs’ accomplishments have brought an upbringing into the technological and modern world. Jobs learned from his mistakes in the past and created a multi-billion dollar company in which people use on a routine basis. Learning from his mistakes, Steve Jobs has made technology a lot simpler and easier with his products in Apple. In modern day life, Apple products are everywhere in daily lives to help today’s society grow and function as people grow in modern technology. The accomplishments of Apple have increased productivity in homes and helped save the environment by creating no-script products.

Businesses have formed into a technology-based environment thanks to Steve Job’s products and successes. When people need to find information and knowledge on a topic, they could just tap their phone screen and find it. Jobs made society’s lives easier and beautiful with technology. As Steve Jobs once said, “Remembering that you are going to die is the best way I know to avoid the trap of thinking you have something to lose”(Steve Jobs’ Stanford Speech).Steve Jobs will always be known as the entrepreneur and successful businessman that has shaped the phone and technology industry. Steve Jobs has made many mistakes in his life, but mistakes are what helped him achieve his goals and improve his successes into becoming a billionaire for his companies. He explains how it is ok to make a mistake, as long as people learn from their mistakes, they will move onward and never give up on what is possible.

Because of his perseverance, his products have impacted society’s day-to-day lives and the modern world in a positive way. Jobs concluded his convocation speech at Stanford University by saying “Stay hungry. Stay foolish,” (“Steve Jobs’ Speech at Stanford University”) telling the college graduates to push themselves and take risks, even if they make mistakes because mistakes will merely force them to do better in the future.

Getting fired from Apple. (2019, Nov 25). Retrieved from https://papersowl.com/examples/getting-fired-from-apple/