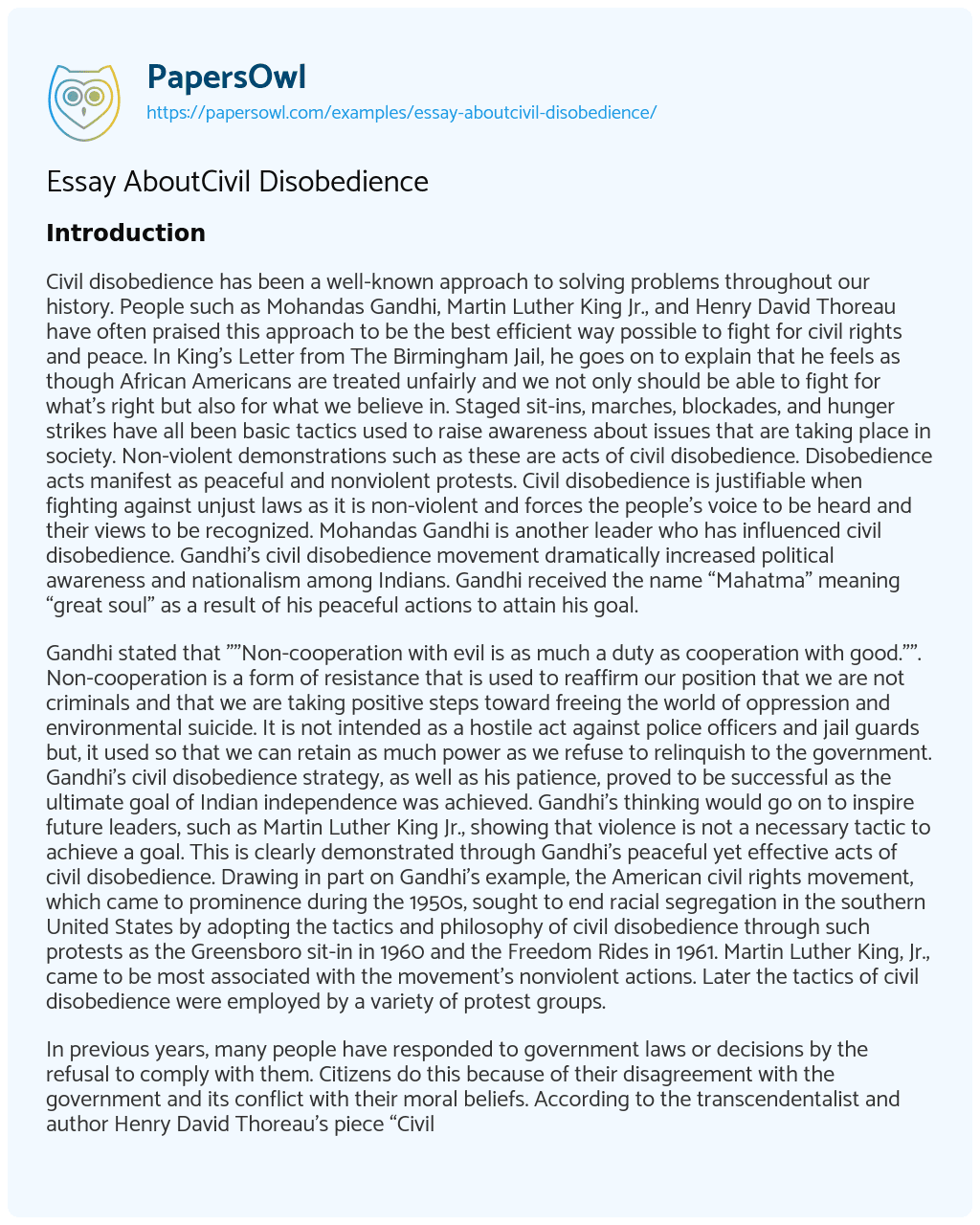 Civil disobedience has been a well-known approach to solving problems throughout our history. People such as Mohandas Gandhi, Martin Luther King Jr., and Henry David Thoreau have often praised this approach to be the best efficient way possible to fight for civil rights and peace. In King’s Letter from The Birmingham Jail, he goes on to explain that he feels as though African Americans are treated unfairly and we not only should be able to fight for what’s right but also for what we believe in. Staged sit-ins, marches, blockades, and hunger strikes have all been basic tactics used to raise awareness about issues that are taking place in society. Non-violent demonstrations such as these are acts of civil disobedience. Disobedience acts manifest as peaceful and nonviolent protests. Civil disobedience is justifiable when fighting against unjust laws as it is non-violent and forces the people’s voice to be heard and their views to be recognized. Mohandas Gandhi is another leader who has influenced civil disobedience. Gandhi’s civil disobedience movement dramatically increased political awareness and nationalism among Indians. Gandhi received the name “Mahatma” meaning “great soul” as a result of his peaceful actions to attain his goal.

Gandhi stated that “”Non-cooperation with evil is as much a duty as cooperation with good.””. Non-cooperation is a form of resistance that is used to reaffirm our position that we are not criminals and that we are taking positive steps toward freeing the world of oppression and environmental suicide. It is not intended as a hostile act against police officers and jail guards but, it used so that we can retain as much power as we refuse to relinquish to the government. Gandhi’s civil disobedience strategy, as well as his patience, proved to be successful as the ultimate goal of Indian independence was achieved. Gandhi’s thinking would go on to inspire future leaders, such as Martin Luther King Jr., showing that violence is not a necessary tactic to achieve a goal. This is clearly demonstrated through Gandhi’s peaceful yet effective acts of civil disobedience. Drawing in part on Gandhi’s example, the American civil rights movement, which came to prominence during the 1950s, sought to end racial segregation in the southern United States by adopting the tactics and philosophy of civil disobedience through such protests as the Greensboro sit-in in 1960 and the Freedom Rides in 1961. Martin Luther King, Jr., came to be most associated with the movement’s nonviolent actions. Later the tactics of civil disobedience were employed by a variety of protest groups.

In previous years, many people have responded to government laws or decisions by the refusal to comply with them. Citizens do this because of their disagreement with the government and its conflict with their moral beliefs. According to the transcendentalist and author Henry David Thoreau’s piece “Civil Disobedience”, he implies that if your principle conflicts with that of the government then you should act against it. Civil disobedience is a necessary factor in a functioning democracy as the voice of the upper-class is represented rather than everyone’s voice as a whole society. When every individual is not represented by democracy it can be declared as injustice. Majority of African Americans face these injustices as they are the ones whose voices are ignored. In a democracy, majority rules and the minority has to fight for their rights. According to Thoreau, “… government is best which governs not all.” This means that the government functions best when it is not only voicing the needs of the majority but the minority as well. Based on information in “Letter from Birmingham Jail”, it can be inferred that the minority also known as African Americans, struggle the most when facing democracy.

From years of being deprived of an education and withdrawn from having a vote or say, they are affected by the government’s decisions greatly. It is the most reasonable approach as it would be wrong to be an accomplice to a procedure that supports what is morally unacceptable. It also increases the likelihood that all protesters are treated equally. Refusing to give names so that everyone committing the same act will be treated equally and fairly in jail and in sentencing and refusing citation, bail, fines or probation keeps protesters together, increasing the potential for collective bargaining. Furthermore, to extend the action, going limp at arrest impedes the removal of the protesters, prolonging the disruption of business as usual. By demonstrating that the criminal justice system is part of the problem it shows that the corporation may be a corporation that is damaging the environment, jeopardizing all our lives and our children’s future, but it is the criminal justice system that is legitimizing and supporting it. Civil disobedience is often an effective means of changing laws and protecting liberties.

It also embodies an important moral concept that there are times when law and justice do not coincide and that to obey the law at such times can be an abdication of ethical responsibility. The choice of civil disobedience and non-cooperation is not for everyone. We all choose to do what feels right to us personally. Bob Dylan also emphasizes the ideas of peace in his song “Blowin’ in the Wind.” He advocated through his music that there was a lack of peace in the world and civil rights. Dylan is also anti-war, pro-civil rights, and a humanitarian. In this song, he states, “How many roads must a man walk down/ before you can call him a man”. This refers to the many civil rights movements of the time and the focus was in African-Americans, Native Americans, Latin Americans, women’s rights, and gay rights. Dylan is implying that these groups of people have done far too much to still be denied basic human rights. Then he states “How many seas must a white dove sail before she sleeps in the sand?”. This line makes a remark on the conflicts of the time, better known as the Vietnam War.

It also applies more generally to conflicts between different groups of race, age, gender, economic status, or beliefs within American society. Lastly, Dylan says, “How many ears must one man have, before he can hear people cry?”. This comments on the way members of the counter-culture movement viewed their critics. The Americans who engaged in things like war protests and “”Be-in’s”” didn’t understand how the rest of the nation could just ignore the problems they saw in the world. By analyzing the meanings of these specific lines in his song, they help one to grasp how he alluded to strong ideas and his songs held greater meanings. I believe Dylan wants the whole world to slow down for a little while and just try to understand what’s around them. This also works to show the other messages of the song which are that great injustices go unnoticed by everyone around them. These problems would be noticed and resolved if only enough people acknowledged what’s around them.