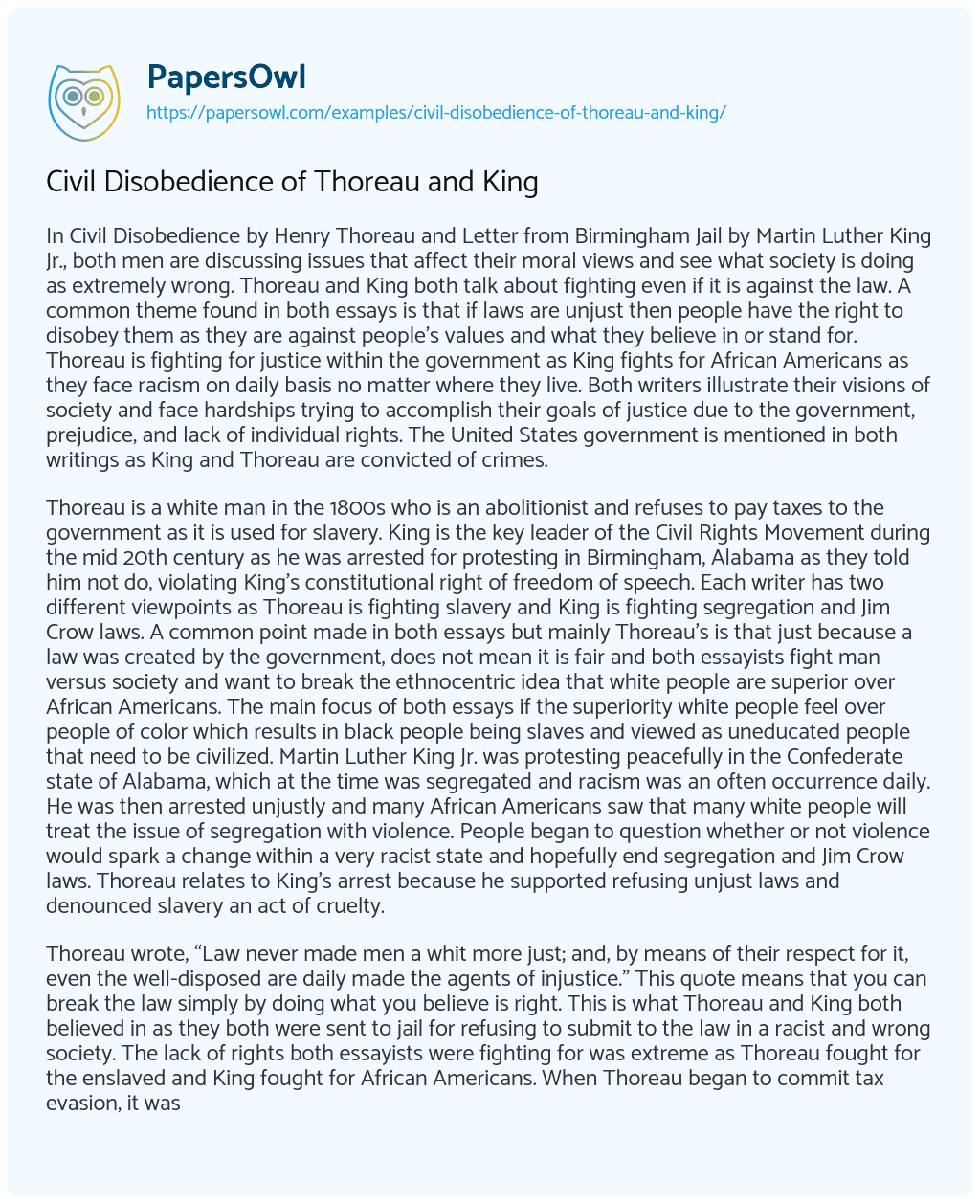 In Civil Disobedience by Henry Thoreau and Letter from Birmingham Jail by Martin Luther King Jr., both men are discussing issues that affect their moral views and see what society is doing as extremely wrong. Thoreau and King both talk about fighting even if it is against the law. A common theme found in both essays is that if laws are unjust then people have the right to disobey them as they are against people’s values and what they believe in or stand for. Thoreau is fighting for justice within the government as King fights for African Americans as they face racism on daily basis no matter where they live. Both writers illustrate their visions of society and face hardships trying to accomplish their goals of justice due to the government, prejudice, and lack of individual rights. The United States government is mentioned in both writings as King and Thoreau are convicted of crimes.

Thoreau is a white man in the 1800s who is an abolitionist and refuses to pay taxes to the government as it is used for slavery. King is the key leader of the Civil Rights Movement during the mid 20th century as he was arrested for protesting in Birmingham, Alabama as they told him not do, violating King’s constitutional right of freedom of speech. Each writer has two different viewpoints as Thoreau is fighting slavery and King is fighting segregation and Jim Crow laws. A common point made in both essays but mainly Thoreau’s is that just because a law was created by the government, does not mean it is fair and both essayists fight man versus society and want to break the ethnocentric idea that white people are superior over African Americans. The main focus of both essays if the superiority white people feel over people of color which results in black people being slaves and viewed as uneducated people that need to be civilized. Martin Luther King Jr. was protesting peacefully in the Confederate state of Alabama, which at the time was segregated and racism was an often occurrence daily. He was then arrested unjustly and many African Americans saw that many white people will treat the issue of segregation with violence. People began to question whether or not violence would spark a change within a very racist state and hopefully end segregation and Jim Crow laws. Thoreau relates to King’s arrest because he supported refusing unjust laws and denounced slavery an act of cruelty.

Thoreau wrote, “Law never made men a whit more just; and, by means of their respect for it, even the well-disposed are daily made the agents of injustice.” This quote means that you can break the law simply by doing what you believe is right. This is what Thoreau and King both believed in as they both were sent to jail for refusing to submit to the law in a racist and wrong society. The lack of rights both essayists were fighting for was extreme as Thoreau fought for the enslaved and King fought for African Americans. When Thoreau began to commit tax evasion, it was during the start of the Mexican-American War. He lived in Massachusetts which was a state in the North which was anti-slavery. Northerners believed the purpose of the war was for Southerners to expand slavery and that was the beginning of when Thoreau began to protest against slavery. Slaves had no rights even though many of their families had been in America for generations and by them being owned by white people was viewed as one of the cruelest and immoral things to ever exist. This idea sparked the abolitionist Thoreau to not pay his taxes and fight for the rights of the “inferior”. King fought for the rights of African Americans as they faced segregation and discrimination nonstop.

Black people were targeted by whites especially by the hate group the Ku Klux Klan, which only fueled King’s fire to end racism in the South so that white people will view black people as equal. He wanted to make sure all people had the same amount of rights no matter their race or ethnicity. Civil Disobedience and Letter from Birmingham Jail both challenged society’s views on African Americans in two different time periods. Thoreau challenged the way people of the South and slave owners treated African Americans which is also a common theme in King’s letter. Both men had to face society and its stereotypes and prejudices which was seen in laws and enforced by police officers or government officials. This brought a huge conflict to Thoreau and King as they had to accomplish their goal of ending slavery or prejudice without breaking unjust laws.

Society today needs people like King and Thoreau today as they were not afraid to fight for what they thought was right. They knew that their purpose of ending prejudice was morally right although society resented it, but for once not abiding by the rules paid off as the United States has changed significantly since the 19 and 20th centuries.

Civil Disobedience of Thoreau and King. (2021, Jun 05). Retrieved from https://papersowl.com/examples/civil-disobedience-of-thoreau-and-king/