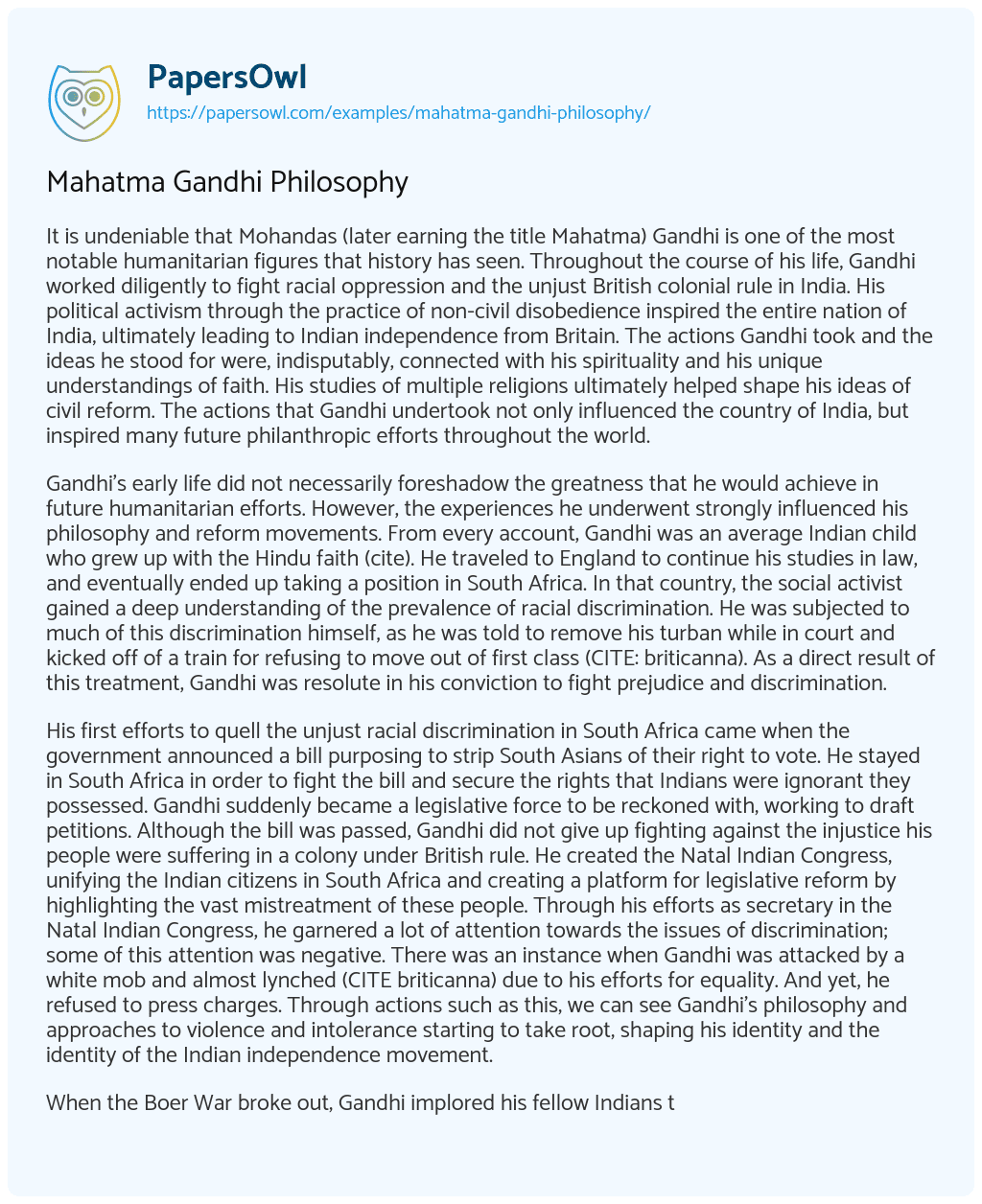 It is undeniable that Mohandas (later earning the title Mahatma) Gandhi is one of the most notable humanitarian figures that history has seen. Throughout the course of his life, Gandhi worked diligently to fight racial oppression and the unjust British colonial rule in India. His political activism through the practice of non-civil disobedience inspired the entire nation of India, ultimately leading to Indian independence from Britain. The actions Gandhi took and the ideas he stood for were, indisputably, connected with his spirituality and his unique understandings of faith. His studies of multiple religions ultimately helped shape his ideas of civil reform. The actions that Gandhi undertook not only influenced the country of India, but inspired many future philanthropic efforts throughout the world.

Gandhi’s early life did not necessarily foreshadow the greatness that he would achieve in future humanitarian efforts. However, the experiences he underwent strongly influenced his philosophy and reform movements. From every account, Gandhi was an average Indian child who grew up with the Hindu faith (cite). He traveled to England to continue his studies in law, and eventually ended up taking a position in South Africa. In that country, the social activist gained a deep understanding of the prevalence of racial discrimination. He was subjected to much of this discrimination himself, as he was told to remove his turban while in court and kicked off of a train for refusing to move out of first class (CITE: briticanna). As a direct result of this treatment, Gandhi was resolute in his conviction to fight prejudice and discrimination.

His first efforts to quell the unjust racial discrimination in South Africa came when the government announced a bill purposing to strip South Asians of their right to vote. He stayed in South Africa in order to fight the bill and secure the rights that Indians were ignorant they possessed. Gandhi suddenly became a legislative force to be reckoned with, working to draft petitions. Although the bill was passed, Gandhi did not give up fighting against the injustice his people were suffering in a colony under British rule. He created the Natal Indian Congress, unifying the Indian citizens in South Africa and creating a platform for legislative reform by highlighting the vast mistreatment of these people. Through his efforts as secretary in the Natal Indian Congress, he garnered a lot of attention towards the issues of discrimination; some of this attention was negative. There was an instance when Gandhi was attacked by a white mob and almost lynched (CITE briticanna) due to his efforts for equality. And yet, he refused to press charges. Through actions such as this, we can see Gandhi’s philosophy and approaches to violence and intolerance starting to take root, shaping his identity and the identity of the Indian independence movement.

When the Boer War broke out, Gandhi implored his fellow Indians to fight alongside the other South African citizens because if they wanted full rights they must accept all that comes with that. After this, conditions did not get better. It was in response to new discriminatory laws that Gandhi created satyagraha meaning “devotion to truth” (CITE). Satyagraha was nonviolent civil disobedience which would continue to be prevalent in Gandhi’s reform movements. The participants of satyagraha would actively disobey unjust laws and accept the consequences of this. It took many years and thousands of Indian citizens uniting under this cause, but eventually the negative publicity South Africa received led to a compromise, achieving social reform. Gandhi left South Africa having been a catalyst of change, inspiring Indian citizens to fight racial prejudice and stand unified in their demand for rights. Gandhi had just begun his life of social activism and now had experience which would help alter all of India.

On the return to his home country, Gandhi did not immediately jump in to social reform and fighting injustice. It was not until much later, when the conflicts between the Indian citizens and British rulership escalated to violent acts, that Gandhi started to take a stance. He revitalized the Indian National Congress, using it to inspire noncooperation and satyagraha movements, along with boycotts (CITE). Even though he had become a very influential and prominent politician, Gandhi had unique views on how a religion should influence politics. He stated, “the only way to be religious at this juncture of human history is to engage in the political life, not politics in the debased sense of party affiliations, or in the sense being a conservative or liberal, but politics in the sense of political awareness” (CITE 36, southasia). He wished to inspire this political activism in his fellow citizens by protesting and riding them of political ignorance. It is interesting to note that Gandhi was not actively pushing a Hindu agenda through his pollical promenance. He continuously advocated for the education of the masses because he recognized that, through discussions of different religions, you can come to know your own religion better (CITE).

Gandhi was often thrown in jail during his protests of injustice. Upon his release, he saw that his nation had become divided both politically and religiously, with Hindus and Muslims. He knew that he needed to reignite the passion for united civil disobedience so Gandhi participated in a three-week fast and then reentered the political sphere to advocate for civil reform. He would not place one group above the other, which angered some of his followers. When the British imposed the Salt Acts on the nation it sparked national outrage. The Acts imposed high taxes, as well as prohibited selling or owning salt, which had a large, negative impact on the poorest Indian citizens (CITE: biography .com). In response, Gandhi began a Satyagraha and marched hundreds of miles to the sea, where he used a process of desalinization in order to rebel against the government and create salt. This became known as the Salt March and served as inspiration for thousands of other citizens, leading to their imprisonment (CITE). Gandhi established a truce with the viceroy, and yet it was not a total victory for the Indian people. Britain still retained a majority of power and control over India, although the treatment of the poorer classes was better.

The continuous discrimination based on the cast systems widespread in India was an issue that Gandhi was incredibly passionate about. The cast distinctions is prevalent in the predominate Indian religion of Hinduism, and the lowest cast (the “Untouchables”) were terribly discriminated against and looked down upon. The British oppressors also adhered to this systematic segregation and further divided casts. Gandhi was frustrated by this. He started a fast to inspire people to change their treatment of the lowest cast and recognize the deep-rooted discrimination that Indians were causing their fellow countrymen. Because of his influence in Indian culture, this started a small movement of better treatment towards the Untouchables. After this, Gandhi resigned his political roles, but still advocated for social changes in India. He decided to focus on educating the lower cast citizens and poor people within India because change is achieved “from the bottom up” (CITE). He promoted the creation of your own clothing and goods, and riding yourself of ignorance as a way to achieve social, political, and economic change within the nation (cite?)

As World War II raged throughout Europe, tensions swelled to all-time highs in India as well. Gandhi had taken back up an active political role and called for the complete removal of British forces in India. This is what is now known as the Quit India Movement (CITE>??). The conflicts between the British and Indians, as well as between Indian Hindus and Muslims, turned violent and there was much unrest throughout the entire country. Many political leaders were imprisoned by the British. When the Labour Party came to power in Britain, things started to change, eventually leading to the creation of both Pakistan and India, finally liberated from British rule. And yet, this ending was not all that Gandhi had hoped for. The Indian people were still divided by their contrasting religions and not unified under one cause. During his fasting to promote peace between the two religions, Gandhi was shot by a Hindu who disagreed with Gandhi’s message of unity.