Essay about Doors of Wittenburg 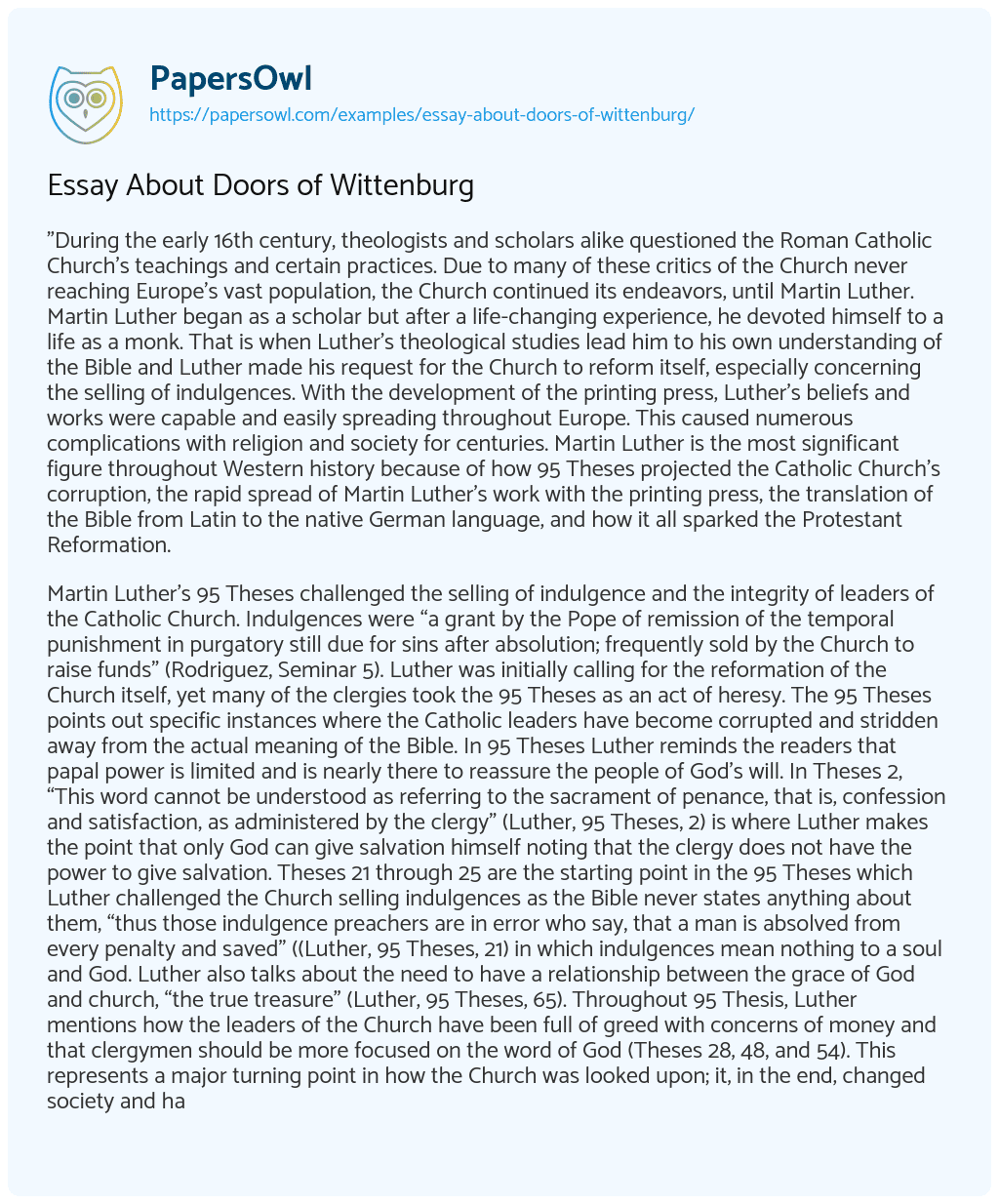 “During the early 16th century, theologists and scholars alike questioned the Roman Catholic Church’s teachings and certain practices. Due to many of these critics of the Church never reaching Europe’s vast population, the Church continued its endeavors, until Martin Luther. Martin Luther began as a scholar but after a life-changing experience, he devoted himself to a life as a monk. That is when Luther’s theological studies lead him to his own understanding of the Bible and Luther made his request for the Church to reform itself, especially concerning the selling of indulgences. With the development of the printing press, Luther’s beliefs and works were capable and easily spreading throughout Europe. This caused numerous complications with religion and society for centuries. Martin Luther is the most significant figure throughout Western history because of how 95 Theses projected the Catholic Church’s corruption, the rapid spread of Martin Luther’s work with the printing press, the translation of the Bible from Latin to the native German language, and how it all sparked the Protestant Reformation.

Martin Luther’s 95 Theses challenged the selling of indulgence and the integrity of leaders of the Catholic Church. Indulgences were “a grant by the Pope of remission of the temporal punishment in purgatory still due for sins after absolution; frequently sold by the Church to raise funds” (Rodriguez, Seminar 5). Luther was initially calling for the reformation of the Church itself, yet many of the clergies took the 95 Theses as an act of heresy. The 95 Theses points out specific instances where the Catholic leaders have become corrupted and stridden away from the actual meaning of the Bible. In 95 Theses Luther reminds the readers that papal power is limited and is nearly there to reassure the people of God’s will. In Theses 2, “This word cannot be understood as referring to the sacrament of penance, that is, confession and satisfaction, as administered by the clergy” (Luther, 95 Theses, 2) is where Luther makes the point that only God can give salvation himself noting that the clergy does not have the power to give salvation. Theses 21 through 25 are the starting point in the 95 Theses which Luther challenged the Church selling indulgences as the Bible never states anything about them, “thus those indulgence preachers are in error who say, that a man is absolved from every penalty and saved” ((Luther, 95 Theses, 21) in which indulgences mean nothing to a soul and God. Luther also talks about the need to have a relationship between the grace of God and church, “the true treasure” (Luther, 95 Theses, 65). Throughout 95 Thesis, Luther mentions how the leaders of the Church have been full of greed with concerns of money and that clergymen should be more focused on the word of God (Theses 28, 48, and 54). This represents a major turning point in how the Church was looked upon; it, in the end, changed society and had a major effect on religion through the world as a whole.

The main reason that Luther had become more successful than the others before he was the innovated power of the printing press. The 95 Theses was able to be spread throughout Europe and the Catholic Church could not avoid the remarks made any longer. Besides just the widespread distribution of the 95 Theses, Luther also translated the Bible from Latin, which only the leaders of the church and select few could read, to the native language of German. The printing press increased literacy across Europe due to the ease of getting books. This allowed for people to gain their own understanding and opinions of the scripture and have a personal relationship with God instead of only what the Priest or Pope was teaching at the time. With the introduction of personal beliefs, society began to develop different ideas of religion than the one that had been set for centuries by the Catholic Church. Without the printing press, Luther would not have had a large impact on religion or society just like he did with the Protestant Reformation.

Martin Luther and 95 Theses had a significant role in sparking the Protestant Reformation and various revolts. The common people and princes were empowered by Luther and his work to separate from the church. Although Luther was originally striving for a reform of the Catholic Church, he was declared a heretic and excommunicated after expressing his beliefs in Worms. The rulers empowered by this were driven by the wealth of the land and separated from the Catholic Church to gain their wealth. The society of the time was also impacted by Luther’s challenge to the social system which had sparked wars and revolts, like the German Peasant Revolt, for many years and changed religion and societal systems around the world.

During his lifetime, Luther had multiple large impacts on society and religion from reform of theology to social structure. But without the printing press, Luther would not have had the impact he did with 95 Theses and the Catholic Church would have continued their ways. Luther and his works empowered the common people, some princes, and still has an impact on the world today. The 95 Theses challenged the selling of indulgences and stated the limit of papal power. All in all, Luther is the most significant figure throughout Western history.”

Essay About Doors of Wittenburg. (2021, Jun 26). Retrieved from https://papersowl.com/examples/essay-about-doors-of-wittenburg/