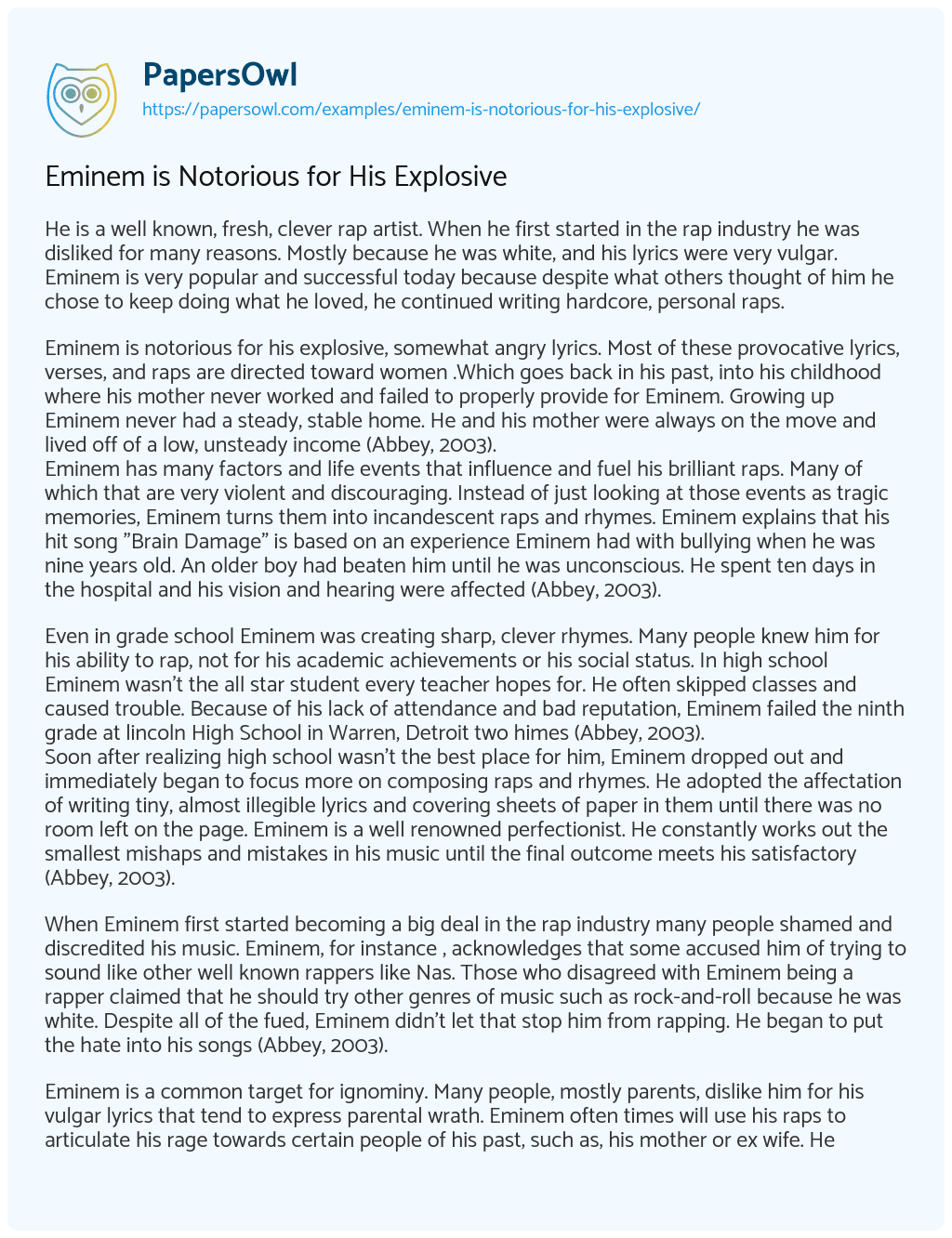 He is a well known, fresh, clever rap artist. When he first started in the rap industry he was disliked for many reasons. Mostly because he was white, and his lyrics were very vulgar. Eminem is very popular and successful today because despite what others thought of him he chose to keep doing what he loved, he continued writing hardcore, personal raps.

Eminem is notorious for his explosive, somewhat angry lyrics. Most of these provocative lyrics, verses, and raps are directed toward women .Which goes back in his past, into his childhood where his mother never worked and failed to properly provide for Eminem. Growing up Eminem never had a steady, stable home. He and his mother were always on the move and lived off of a low, unsteady income (Abbey, 2003).
Eminem has many factors and life events that influence and fuel his brilliant raps. Many of which that are very violent and discouraging. Instead of just looking at those events as tragic memories, Eminem turns them into incandescent raps and rhymes. Eminem explains that his hit song “Brain Damage” is based on an experience Eminem had with bullying when he was nine years old. An older boy had beaten him until he was unconscious. He spent ten days in the hospital and his vision and hearing were affected (Abbey, 2003).

Even in grade school Eminem was creating sharp, clever rhymes. Many people knew him for his ability to rap, not for his academic achievements or his social status. In high school Eminem wasn’t the all star student every teacher hopes for. He often skipped classes and caused trouble. Because of his lack of attendance and bad reputation, Eminem failed the ninth grade at lincoln High School in Warren, Detroit two himes (Abbey, 2003).
Soon after realizing high school wasn’t the best place for him, Eminem dropped out and immediately began to focus more on composing raps and rhymes. He adopted the affectation of writing tiny, almost illegible lyrics and covering sheets of paper in them until there was no room left on the page. Eminem is a well renowned perfectionist. He constantly works out the smallest mishaps and mistakes in his music until the final outcome meets his satisfactory (Abbey, 2003).

When Eminem first started becoming a big deal in the rap industry many people shamed and discredited his music. Eminem, for instance , acknowledges that some accused him of trying to sound like other well known rappers like Nas. Those who disagreed with Eminem being a rapper claimed that he should try other genres of music such as rock-and-roll because he was white. Despite all of the fued, Eminem didn’t let that stop him from rapping. He began to put the hate into his songs (Abbey, 2003).

Eminem is a common target for ignominy. Many people, mostly parents, dislike him for his vulgar lyrics that tend to express parental wrath. Eminem often times will use his raps to articulate his rage towards certain people of his past, such as, his mother or ex wife. He also bashes gays, lesbians, and liberals in his degrading lyrics. Crude verses is not the only reason Eminem is widely discredited. The fact that he is white makes him politically easier for critics to attack (Eberstabt, 2005).

Many people have very different perspectives on Eminem and his music. Most believe he is a disgrace, a sick, twisted, irresponsible, misogynistic individual. People say his lyrics are hateful and that Eminem shouldn’t be aloud to rap such horrible things. Others think Eminem is exactly what we need in the industry. He is a brilliant, clever, heroic, outspoken artist. His lyrics are real and don’t hold back to make society happy (Robinson, 2004).
Getting talked about is not something that Eminem is a stranger to. His whole career he has been widely disgraced for various reasons. Mostly for his poor upbringing and his race. But Eminem never let that negativity stop him from doing what he was passionate about. Eminem learned to take the hateful comments and disadvantages and use them to his advantage. In the article, Eminem explained that he stopped caring what people said about him. As a result he became more popular (Robinson, 2004).

Eminem’s so called “distasteful” and “crude” rhymes is actually what makes him so popular. Eminem’s most successful album was The Marshall Mathers LP. It was released in 2000 and brought in loads of controversy towards him. It included the provocative hit singles “The Real Slim Shady” and “Stan”. This particular album set the record for the fastest selling rap album in the United States. The Marshall Mathers LP was also nominated for album of the year (Eminem, 2018).

Eminem wasn’t only famous for rapping though. He also starred in a movie. In 2002 Eminem inclined with success. He produced The Eminem Show and was the main character in “8 Mile”. The Eminem Show was almost as successful as the previous debut of The Marshall Mathers LP. The semiautobiographal movie “8 Mile” was almost just as successful as The Marshall Mathers LP. The intense film was a commercial success (Eminem, 2018).

Rap is a form of entertainment. Eminem’s goal is to create raps that are witty and entertaining. He tries to keep his raps stunning and unexpected. He wants his lyrics to be unanticipated so they will catch you off guard. Many times this will keep people listening because they want to hear what’s going to come out of his mouth next. Often times when Eminem is working verses he is amazed at the clever punchlines he comes up with (Abbey, 2003).
Eminem has a passion for rap. Ever since he was a child he was putting together rhymes and rhythms. That’s why he is so excellent at rapping. He includes so much emotion and effort into his lyrics. His lyrics might be vulgar but there is so much behind them. That’s why he is so well known. People began to fall in love with the harsh honesty in his verses. Eminem puts as much passion and effort in his raps today as he did fifteen years ago (Eminem, 2017).

Eminem is an illustrious rap artist mostly known for his obscene and personal lyrics.
In the beginning of his career, many people were not fond of him being a rapper. Mainly because of his violent raps, and the fact that he was white. Despite all of the negative feedback, Eminem continued doing what he was passionate about, and is now a very famous, skilled rap artist.

Eminem is Notorious for His Explosive. (2019, Dec 12). Retrieved from https://papersowl.com/examples/eminem-is-notorious-for-his-explosive/