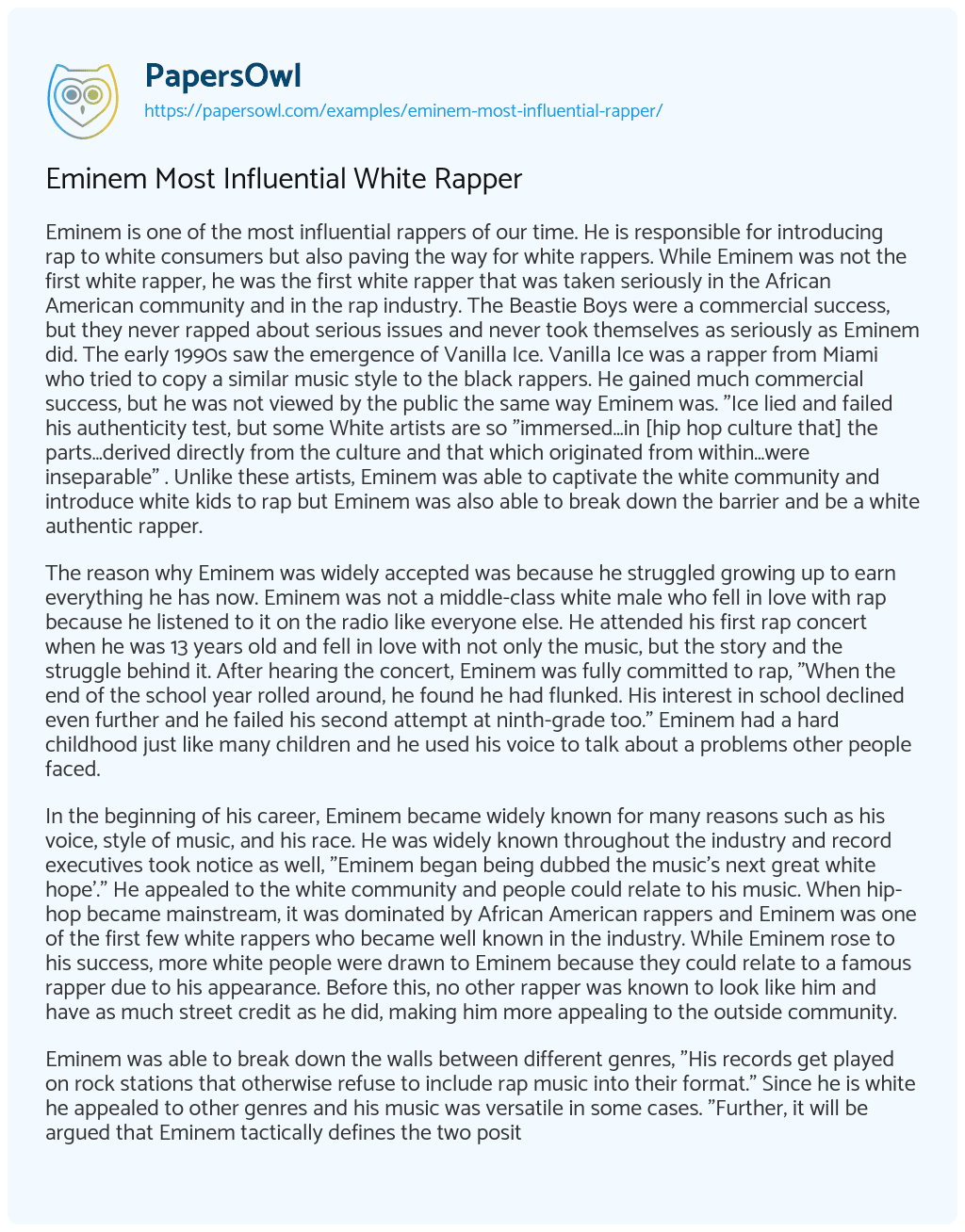 Eminem is one of the most influential rappers of our time. He is responsible for introducing rap to white consumers but also paving the way for white rappers. While Eminem was not the first white rapper, he was the first white rapper that was taken seriously in the African American community and in the rap industry. The Beastie Boys were a commercial success, but they never rapped about serious issues and never took themselves as seriously as Eminem did. The early 1990s saw the emergence of Vanilla Ice. Vanilla Ice was a rapper from Miami who tried to copy a similar music style to the black rappers. He gained much commercial success, but he was not viewed by the public the same way Eminem was. “Ice lied and failed his authenticity test, but some White artists are so “immersed…in [hip hop culture that] the parts…derived directly from the culture and that which originated from within…were inseparable” . Unlike these artists, Eminem was able to captivate the white community and introduce white kids to rap but Eminem was also able to break down the barrier and be a white authentic rapper.

The reason why Eminem was widely accepted was because he struggled growing up to earn everything he has now. Eminem was not a middle-class white male who fell in love with rap because he listened to it on the radio like everyone else. He attended his first rap concert when he was 13 years old and fell in love with not only the music, but the story and the struggle behind it. After hearing the concert, Eminem was fully committed to rap, “When the end of the school year rolled around, he found he had flunked. His interest in school declined even further and he failed his second attempt at ninth-grade too.” Eminem had a hard childhood just like many children and he used his voice to talk about a problems other people faced.

In the beginning of his career, Eminem became widely known for many reasons such as his voice, style of music, and his race. He was widely known throughout the industry and record executives took notice as well, “Eminem began being dubbed the music’s next great white hope’.” He appealed to the white community and people could relate to his music. When hip-hop became mainstream, it was dominated by African American rappers and Eminem was one of the first few white rappers who became well known in the industry. While Eminem rose to his success, more white people were drawn to Eminem because they could relate to a famous rapper due to his appearance. Before this, no other rapper was known to look like him and have as much street credit as he did, making him more appealing to the outside community.

Eminem was able to break down the walls between different genres, “His records get played on rock stations that otherwise refuse to include rap music into their format.” Since he is white he appealed to other genres and his music was versatile in some cases. “Further, it will be argued that Eminem tactically defines the two positions’ of here and there by walking in the spaces between whiteness, blackness, sameness, and otherness, while refusing to remain fixed in any one position.” This is different in the sense that artists usually defined themselves by their genre. Other black rappers did not have the choice of putting their music elsewhere. Even when Lil Wayne came out with a rock album, it was ever played or viewed as real rock. Eminem is one of the few people to cross the boundaries between genres. Eminem was able to do this because of his race. People did not think of him just as a rapper because he was white and was able to attract different races to his music. People that normally would not listen to rap listened to Eminem.