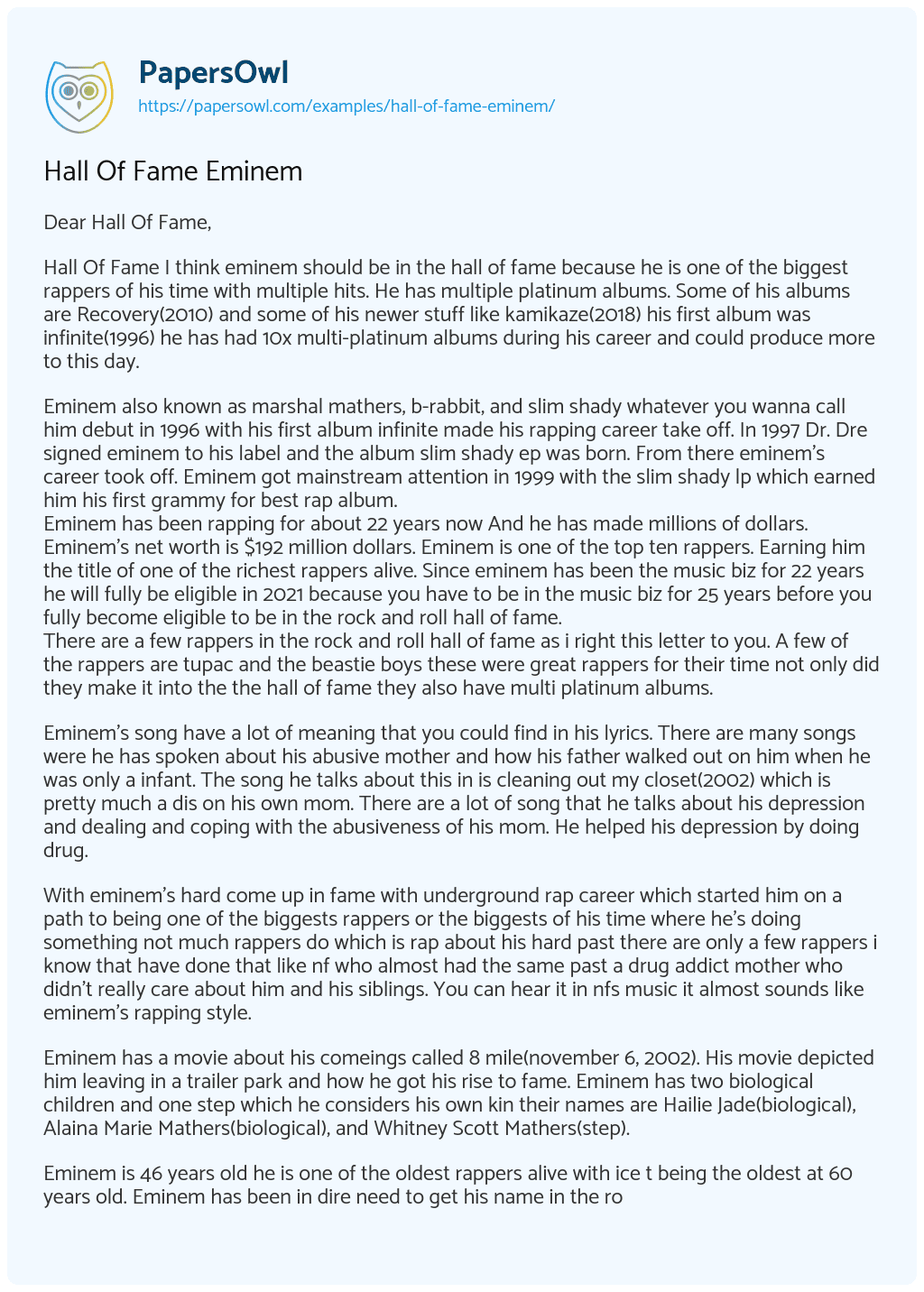 Hall Of Fame I think eminem should be in the hall of fame because he is one of the biggest rappers of his time with multiple hits. He has multiple platinum albums. Some of his albums are Recovery(2010) and some of his newer stuff like kamikaze(2018) his first album was infinite(1996) he has had 10x multi-platinum albums during his career and could produce more to this day.

Eminem also known as marshal mathers, b-rabbit, and slim shady whatever you wanna call him debut in 1996 with his first album infinite made his rapping career take off. In 1997 Dr. Dre signed eminem to his label and the album slim shady ep was born. From there eminem’s career took off. Eminem got mainstream attention in 1999 with the slim shady lp which earned him his first grammy for best rap album.
Eminem has been rapping for about 22 years now And he has made millions of dollars. Eminem’s net worth is $192 million dollars. Eminem is one of the top ten rappers. Earning him the title of one of the richest rappers alive. Since eminem has been the music biz for 22 years he will fully be eligible in 2021 because you have to be in the music biz for 25 years before you fully become eligible to be in the rock and roll hall of fame.
There are a few rappers in the rock and roll hall of fame as i right this letter to you. A few of the rappers are tupac and the beastie boys these were great rappers for their time not only did they make it into the the hall of fame they also have multi platinum albums.

Eminem’s song have a lot of meaning that you could find in his lyrics. There are many songs were he has spoken about his abusive mother and how his father walked out on him when he was only a infant. The song he talks about this in is cleaning out my closet(2002) which is pretty much a dis on his own mom. There are a lot of song that he talks about his depression and dealing and coping with the abusiveness of his mom. He helped his depression by doing drug.

With eminem’s hard come up in fame with underground rap career which started him on a path to being one of the biggests rappers or the biggests of his time where he’s doing something not much rappers do which is rap about his hard past there are only a few rappers i know that have done that like nf who almost had the same past a drug addict mother who didn’t really care about him and his siblings. You can hear it in nfs music it almost sounds like eminem’s rapping style.

Eminem has a movie about his comeings called 8 mile(november 6, 2002). His movie depicted him leaving in a trailer park and how he got his rise to fame. Eminem has two biological children and one step which he considers his own kin their names are Hailie Jade(biological), Alaina Marie Mathers(biological), and Whitney Scott Mathers(step).

Eminem is 46 years old he is one of the oldest rappers alive with ice t being the oldest at 60 years old. Eminem has been in dire need to get his name in the rock and roll hall of fame to bring his name even more great. These are some of the reasons i think eminem deserves to be in the rock and roll hall of fame he deserves to at least have a chance to get in. He is a great when you hear people talk about rappers he pops into almost every one’s mind.