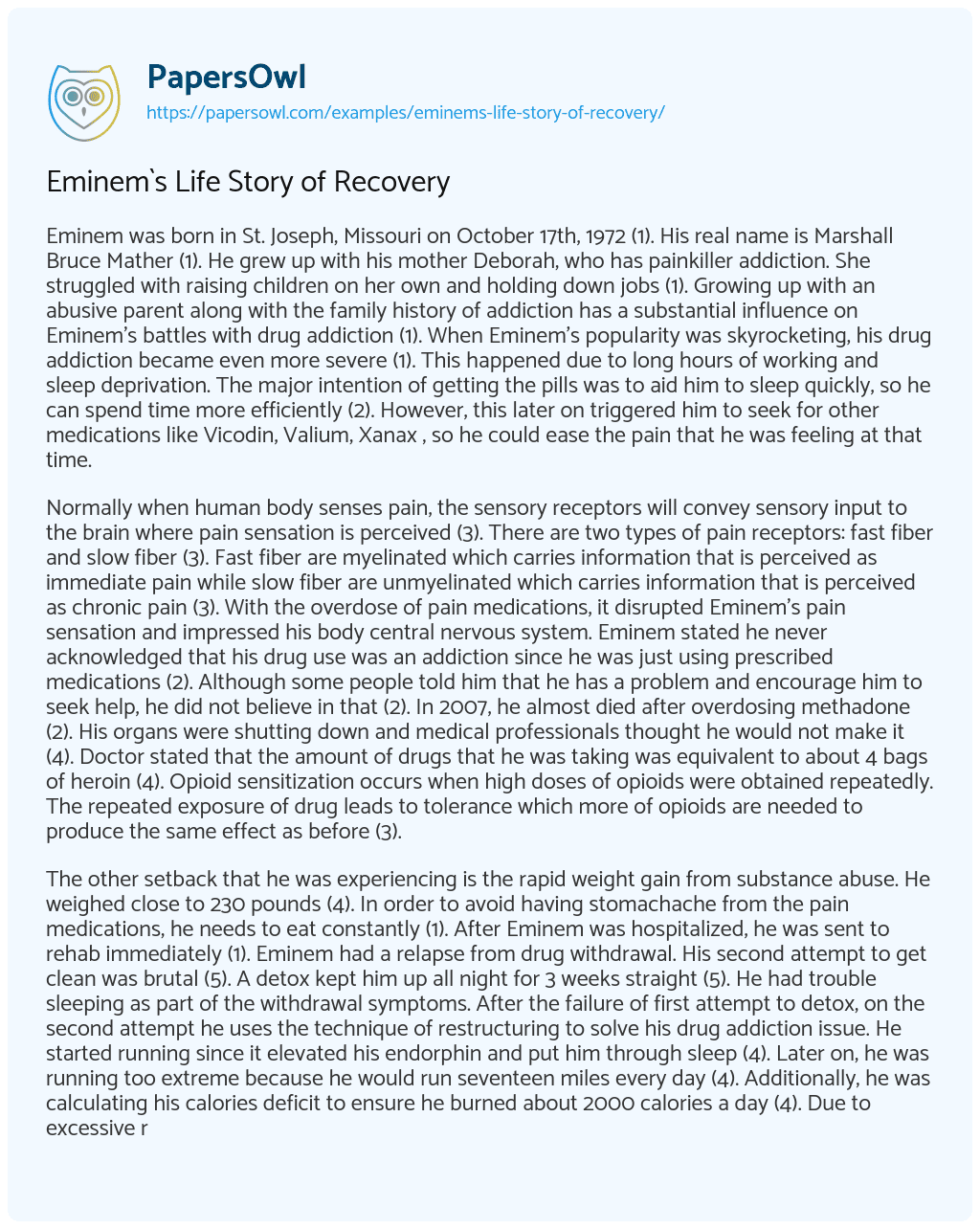 Eminem was born in St. Joseph, Missouri on October 17th, 1972 (1). His real name is Marshall Bruce Mather (1). He grew up with his mother Deborah, who has painkiller addiction. She struggled with raising children on her own and holding down jobs (1). Growing up with an abusive parent along with the family history of addiction has a substantial influence on Eminem’s battles with drug addiction (1). When Eminem’s popularity was skyrocketing, his drug addiction became even more severe (1). This happened due to long hours of working and sleep deprivation. The major intention of getting the pills was to aid him to sleep quickly, so he can spend time more efficiently (2). However, this later on triggered him to seek for other medications like Vicodin, Valium, Xanax , so he could ease the pain that he was feeling at that time.

Normally when human body senses pain, the sensory receptors will convey sensory input to the brain where pain sensation is perceived (3). There are two types of pain receptors: fast fiber and slow fiber (3). Fast fiber are myelinated which carries information that is perceived as immediate pain while slow fiber are unmyelinated which carries information that is perceived as chronic pain (3). With the overdose of pain medications, it disrupted Eminem’s pain sensation and impressed his body central nervous system. Eminem stated he never acknowledged that his drug use was an addiction since he was just using prescribed medications (2). Although some people told him that he has a problem and encourage him to seek help, he did not believe in that (2). In 2007, he almost died after overdosing methadone (2). His organs were shutting down and medical professionals thought he would not make it (4). Doctor stated that the amount of drugs that he was taking was equivalent to about 4 bags of heroin (4). Opioid sensitization occurs when high doses of opioids were obtained repeatedly. The repeated exposure of drug leads to tolerance which more of opioids are needed to produce the same effect as before (3).

The other setback that he was experiencing is the rapid weight gain from substance abuse. He weighed close to 230 pounds (4). In order to avoid having stomachache from the pain medications, he needs to eat constantly (1). After Eminem was hospitalized, he was sent to rehab immediately (1). Eminem had a relapse from drug withdrawal. His second attempt to get clean was brutal (5). A detox kept him up all night for 3 weeks straight (5). He had trouble sleeping as part of the withdrawal symptoms. After the failure of first attempt to detox, on the second attempt he uses the technique of restructuring to solve his drug addiction issue. He started running since it elevated his endorphin and put him through sleep (4). Later on, he was running too extreme because he would run seventeen miles every day (4). Additionally, he was calculating his calories deficit to ensure he burned about 2000 calories a day (4). Due to excessive running, he tore up his hip flexor (4). After he gotten better, he started incorporating other workout into his exercise routine to ensure that he would not fall back to the relapse stage (4). Eminem lost 80 pounds successfully through his recovery process (1). He mentioned that his children were his motivation to withdraw from drug abuse because he wants to be there for his children when they need help (2). Furthermore, the support from his close friends made his mindset more determined while going through the recovery process (1). Throughout the recovery process, he had to learn to regain his motor skills and language skills (1).

The recovery process from drug addiction will forever be Eminem’s explicit memory because he will always remember the struggles that he had overcome to become who he is today. This year is Eminem’s 10 years of drug free (5). He was speaking in a documentary about how he became addicted to pain medications and the consequences he had experienced during battles with drugs (5). His story motivates many people who are undergoing drug addiction and increases awareness of drug abuse. Younger generations can learn through vicarious conditioning. They grasp the consequences of drug addiction by hearing what Eminem had gone through during the withdrawal period. Eminem has shown us that anyone can recover from substance abuse with persistence, industrious and determination.