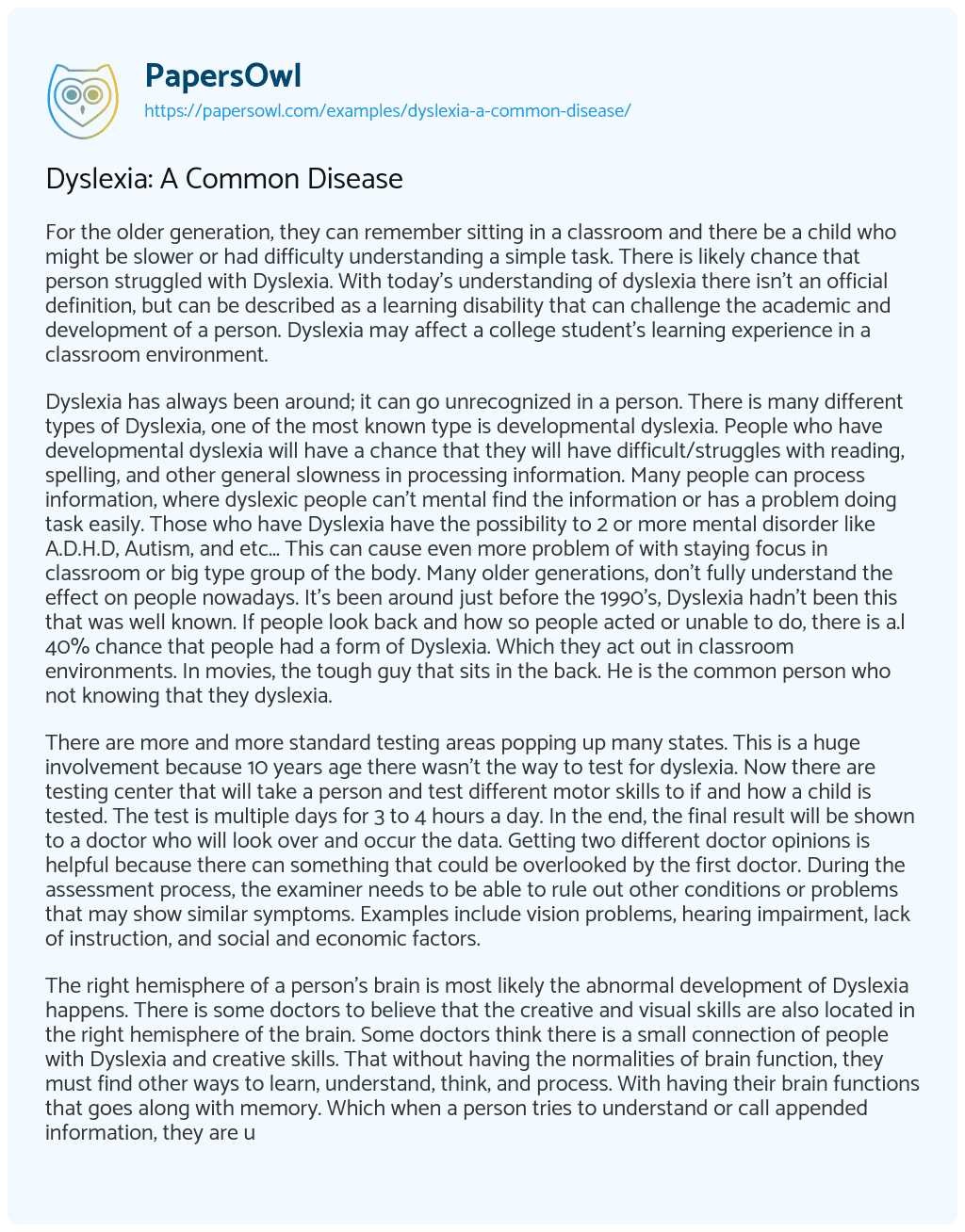 For the older generation, they can remember sitting in a classroom and there be a child who might be slower or had difficulty understanding a simple task. There is likely chance that person struggled with Dyslexia. With today’s understanding of dyslexia there isn’t an official definition, but can be described as a learning disability that can challenge the academic and development of a person. Dyslexia may affect a college student’s learning experience in a classroom environment.

Dyslexia has always been around; it can go unrecognized in a person. There is many different types of Dyslexia, one of the most known type is developmental dyslexia. People who have developmental dyslexia will have a chance that they will have difficult/struggles with reading, spelling, and other general slowness in processing information. Many people can process information, where dyslexic people can’t mental find the information or has a problem doing task easily. Those who have Dyslexia have the possibility to 2 or more mental disorder like A.D.H.D, Autism, and etc… This can cause even more problem of with staying focus in classroom or big type group of the body. Many older generations, don’t fully understand the effect on people nowadays. It’s been around just before the 1990’s, Dyslexia hadn’t been this that was well known. If people look back and how so people acted or unable to do, there is a.l 40% chance that people had a form of Dyslexia. Which they act out in classroom environments. In movies, the tough guy that sits in the back. He is the common person who not knowing that they dyslexia.

There are more and more standard testing areas popping up many states. This is a huge involvement because 10 years age there wasn’t the way to test for dyslexia. Now there are testing center that will take a person and test different motor skills to if and how a child is tested. The test is multiple days for 3 to 4 hours a day. In the end, the final result will be shown to a doctor who will look over and occur the data. Getting two different doctor opinions is helpful because there can something that could be overlooked by the first doctor. During the assessment process, the examiner needs to be able to rule out other conditions or problems that may show similar symptoms. Examples include vision problems, hearing impairment, lack of instruction, and social and economic factors.

The right hemisphere of a person’s brain is most likely the abnormal development of Dyslexia happens. There is some doctors to believe that the creative and visual skills are also located in the right hemisphere of the brain. Some doctors think there is a small connection of people with Dyslexia and creative skills. That without having the normalities of brain function, they must find other ways to learn, understand, think, and process. With having their brain functions that goes along with memory. Which when a person tries to understand or call appended information, they are using working memory. In some studies it shows, there is a small link between a person with dyslexia and creativity. Not being able to have full access to their normal working memory. This causes them to have to think outside of the box. The art is a good place where a person can have fewer restrictions. There aren’t many rules in how people with dyslexia have more freedom. Math and English have an order to doing certain situations. A person can’t really work outside of the box, because there isn’t any room to.

Individual everyone is completely different in how they act and think. No two people are the same, there might be some similarities in how someone needs help. It’s like people’s personalities, no 2 peoples are the same. So in studies, it shows that when comparing data of dyslexia students and non-dyslexic students, it’s shown that there are better compared to those who are in their age group than a whole. This is the best because these people should be going through the same health and mental stages.  By looking at children in schools, people can see that a child could have more difficulties with spelling than their peers around them. This isn’t always a given for people who have Dyslexia, but it’s telling a sign that there is development problems to a raise or they just need a little special attention. Doctors are starting to think once school starts for a child, their development is not where it should be.

Schools can implement academic accommodations and modifications to help dyslexic students succeed. For example, a student with dyslexia can be given extra time to complete tasks, help with taking notes, and work assignments that are modified appropriately. Teachers can give taped tests or allow dyslexic students to use alternative means of assessment. Students can benefit from listening to books on tape, using text reading computer programs, and from writing on computers. There are many people believe that it’s unfair for all those that Dyslexia students get some advantages. They believe that everyone should be able to have access to the same things.

A student can develop a problem with emotional issues that could be linked to school issues.  Mental health specialists can help students cope with their struggles.his makes it hard to recognize short, familiar words or to sound out longer words. It takes a lot of time for a person with dyslexia to sound out a word. Because word reading takes more time and focus, the meaning of the word often is lost, and reading comprehension is poor.

It’s not surprising that people with dyslexia have trouble spelling. They also might have trouble expressing themselves in writing and even speaking. Dyslexia is a language processing disorder, so it can affect all forms of language, spoken or written

Some people have milder forms of dyslexia, so they may have less trouble in these other areas of spoken and written language. Some people work around their dyslexia, but it takes a lot of effort and extra work. Dyslexia isn’t something that goes away on its own or that a person outgrows. Fortunately, with proper help, most people with dyslexia learn to read. They often find different ways to learn and use those strategies all their lives.

Dyslexia is a disorder and not a disease, there isn’t a way to cure dyslexia. Which a child with diagnosed dyslexia can still have difficult all the way to old age. Their many beliefs that having poor spelling ability will go away with age, but many adults will have more of broad spelling vocabulary and the same difficulties. Even though a human brain doesn’t fully develop until the age 21, Dyslexia will always hinder working part of the brain that holds difficulty.   There isn’t always a stop in a person’s ability to learn new things. Where 2 different people with similarities of resistances can learn a foreign language. One person can struggle and not be able to remember or recall a pond the translation. Its like they have never learned or its the first time hearing the phrase. Another person could have difficulties but excel in a language. Sign language is a great foreign to learn, its more about hand and eye coordination. They may find it difficult to express themselves clearly, or to fully comprehend what others mean when they speak. Such language problems are often difficult to recognize, but they can lead to major problems in school, in the workplace, and in relating to other people. The effects of dyslexia reach well beyond the classroom.

Even with studies and testing, dyslexia is still unknown. There is a complete full workup of how it functions. No two people are the same, there might be some similarities in how someone needs help. It’s like people’s personalities, no 2 peoples are the same. There are some disease and disorder that can be affected by a person’s environment, or background. Dyslexia isn’t known to completely be affected by any one. Its known to have multiple generation in a family to have Dyslexia.

Depending on the field the person goes into, may factor around how their working memory is. A person can a higher ranking officer in the army to a media anchor. Dyslexia doesn’t only affect a person’s brain, but how outgoing. There is a high percentage that a dyslexia person could have been bullied and have a negative affect how the act. Some may avoid doing that show their biggest weakness.

Dyslexia does not affect everyone the same. There are similarities how their functions and other mental problems developed/ The child may seem clumsier than their peers. Catching a ball may be difficult. Poorer eye-hand coordination may be a symptom of other similar neurological conditions, including dyspraxia.

Dyslexia as a Common Disease

The Disorder of Dyslexia

Dyslexia Among Students and Adults

Essay about what is Dyslexia