How do Video-games Affect Child Development 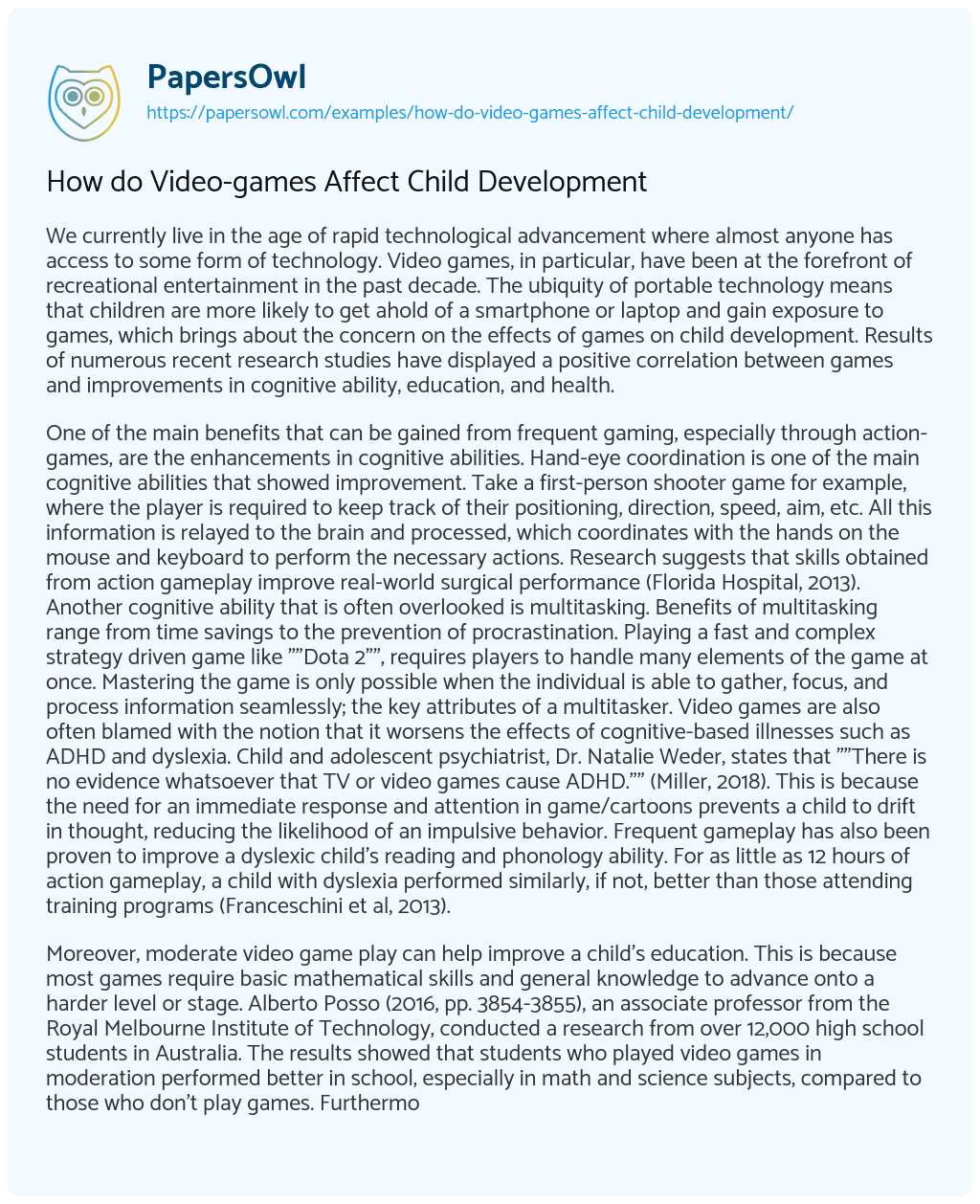 We currently live in the age of rapid technological advancement where almost anyone has access to some form of technology. Video games, in particular, have been at the forefront of recreational entertainment in the past decade. The ubiquity of portable technology means that children are more likely to get ahold of a smartphone or laptop and gain exposure to games, which brings about the concern on the effects of games on child development. Results of numerous recent research studies have displayed a positive correlation between games and improvements in cognitive ability, education, and health.

One of the main benefits that can be gained from frequent gaming, especially through action-games, are the enhancements in cognitive abilities. Hand-eye coordination is one of the main cognitive abilities that showed improvement. Take a first-person shooter game for example, where the player is required to keep track of their positioning, direction, speed, aim, etc. All this information is relayed to the brain and processed, which coordinates with the hands on the mouse and keyboard to perform the necessary actions. Research suggests that skills obtained from action gameplay improve real-world surgical performance (Florida Hospital, 2013). Another cognitive ability that is often overlooked is multitasking. Benefits of multitasking range from time savings to the prevention of procrastination. Playing a fast and complex strategy driven game like “”Dota 2″”, requires players to handle many elements of the game at once. Mastering the game is only possible when the individual is able to gather, focus, and process information seamlessly; the key attributes of a multitasker. Video games are also often blamed with the notion that it worsens the effects of cognitive-based illnesses such as ADHD and dyslexia. Child and adolescent psychiatrist, Dr. Natalie Weder, states that “”There is no evidence whatsoever that TV or video games cause ADHD.”” (Miller, 2018). This is because the need for an immediate response and attention in game/cartoons prevents a child to drift in thought, reducing the likelihood of an impulsive behavior. Frequent gameplay has also been proven to improve a dyslexic child’s reading and phonology ability. For as little as 12 hours of action gameplay, a child with dyslexia performed similarly, if not, better than those attending training programs (Franceschini et al, 2013).

Moreover, moderate video game play can help improve a child’s education. This is because most games require basic mathematical skills and general knowledge to advance onto a harder level or stage. Alberto Posso (2016, pp. 3854-3855), an associate professor from the Royal Melbourne Institute of Technology, conducted a research from over 12,000 high school students in Australia. The results showed that students who played video games in moderation performed better in school, especially in math and science subjects, compared to those who don’t play games. Furthermore, many game developers focus on incorporating meaningful historical events into games. The characters and locations from the past can induce interest in players and drive their passion for history. A good example would be a famous game called Assassin’s Creed Origin where the plot is set in Ptolemaic Egypt. Historical events displayed have a basis for truth. Another educational value that video games offer are communication skills. Baierschmidt (2014, pp. 668-669) constructed and recruited a unique English As A Second Language course with the utilization of gaming. He notes that 39% of respondents found that multiplayer gaming activity aided with their studies. This is because language and communication skills play an important role during the activity and that a sound victory can only be achieved through effective communication.

The term “”gamer”” is typically associated with a person sitting at a desk or on a sofa. Game producers attempt to tackle this issue by developing “”exergames””, games that encourage physical movement and exercise. Popular motion tracking devices such as the Xbox Kinect©, Playstation Camera©, and Nintendo Wii, have fostered the exergaming genre. “”The biggest loser”” and “”Kinect Sports””, allow gamers to remain fit and provide a sense of achievement equivalent to that of traditional sports. Gaming can also be a means of stress relief, as a survey conducted on 1614 gamers indicated the majority of gamers play games to unwind and recuperate from exposure to a stressful situation (Reinecke, 2009).

However, video games may also induce stress in players. This occurs more often in competitive games that require players to perform at their maximum capacity. Losing a game may further fuel their stress levels, or even lead to negative aggression as players may become frustrated by not meeting their own expectations in game. But, stress is subjective, and different people handle stress differently. Playing a game that is more laid back and calm can prevent such stress from arising. An article by Mental Floss (2015) listed an experiment conducted on players over six months and measured their heart rate. The results showed that certain games reduced the adrenaline response by over 50 percent, implying that game stress is subjectively based and can vary.

To conclude, our gaming perceptions and stereotypes are in need of change. Countless research studies have facilitated the benefits of gaming. And yes, gaming is not without its fair share of negative effects, but most of these effects can be omitted through proper regulation or even avoided. If you are a parent and concerned about your child’s interest in gaming, do keep in mind that the effects of video games goes beyond time-consuming and can benefit your child in many aspects of their cognition, education, and even health.

How do Video-games Affect Child Development. (2019, Jan 28). Retrieved from https://papersowl.com/examples/how-do-video-games-affect-child-development/

How Video Games are Good and Bad for your Health?

What Happening to your Body while Playing Video Games?