An Issue of Dyslexia Discovered 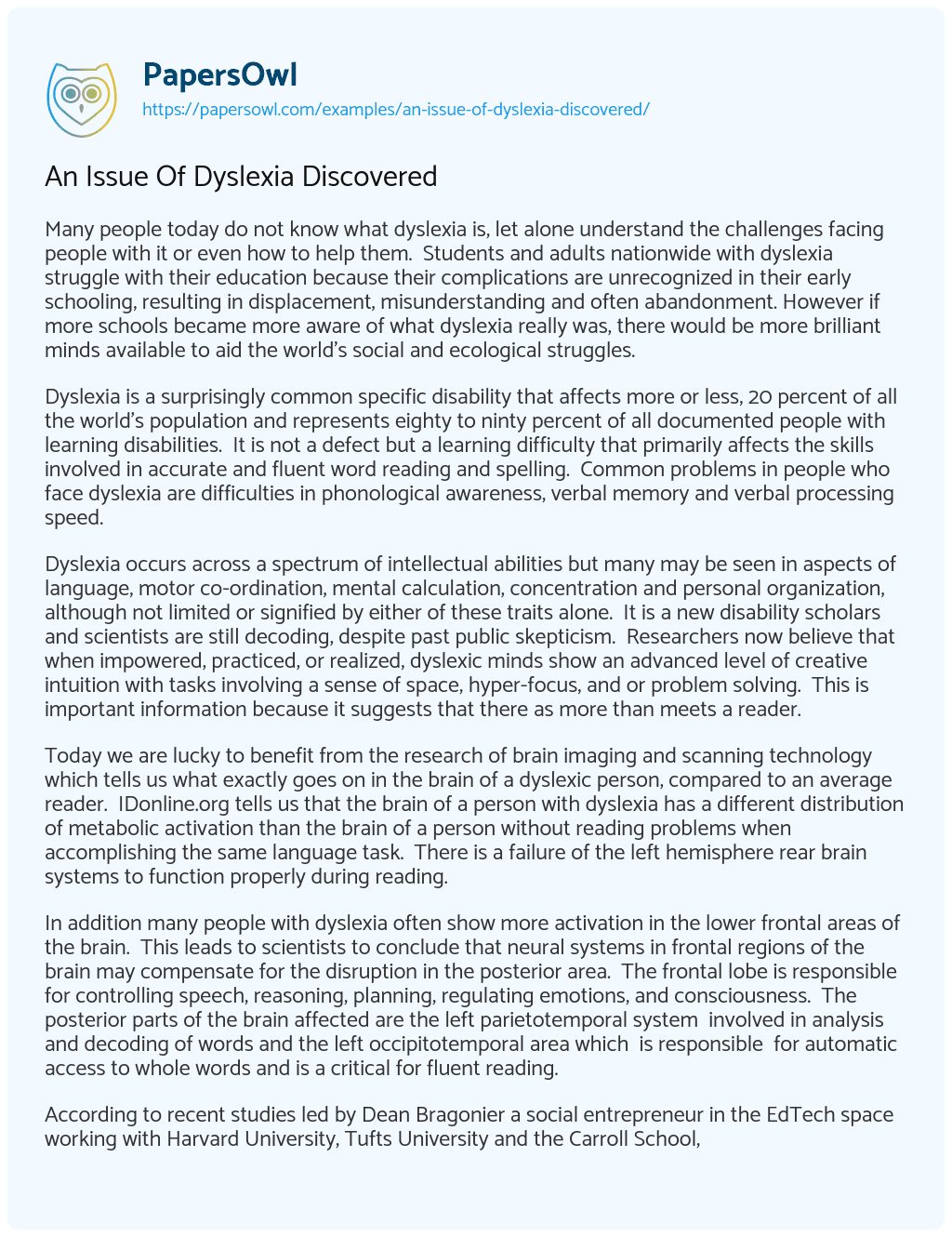 Many people today do not know what dyslexia is, let alone understand the challenges facing people with it or even how to help them.  Students and adults nationwide with dyslexia struggle with their education because their complications are unrecognized in their early schooling, resulting in displacement, misunderstanding and often abandonment. However if more schools became more aware of what dyslexia really was, there would be more brilliant minds available to aid the world’s social and ecological struggles.

Dyslexia is a surprisingly common specific disability that affects more or less, 20 percent of all the world’s population and represents eighty to ninty percent of all documented people with learning disabilities.  It is not a defect but a learning difficulty that primarily affects the skills involved in accurate and fluent word reading and spelling.  Common problems in people who face dyslexia are difficulties in phonological awareness, verbal memory and verbal processing speed.

Dyslexia occurs across a spectrum of intellectual abilities but many may be seen in aspects of language, motor co-ordination, mental calculation, concentration and personal organization, although not limited or signified by either of these traits alone.  It is a new disability scholars and scientists are still decoding, despite past public skepticism.  Researchers now believe that when impowered, practiced, or realized, dyslexic minds show an advanced level of creative intuition with tasks involving a sense of space, hyper-focus, and or problem solving.  This is important information because it suggests that there as more than meets a reader.

Today we are lucky to benefit from the research of brain imaging and scanning technology which tells us what exactly goes on in the brain of a dyslexic person, compared to an average reader.  IDonline.org tells us that the brain of a person with dyslexia has a different distribution of metabolic activation than the brain of a person without reading problems when accomplishing the same language task.  There is a failure of the left hemisphere rear brain systems to function properly during reading.

In addition many people with dyslexia often show more activation in the lower frontal areas of the brain.  This leads to scientists to conclude that neural systems in frontal regions of the brain may compensate for the disruption in the posterior area.  The frontal lobe is responsible for controlling speech, reasoning, planning, regulating emotions, and consciousness.  The posterior parts of the brain affected are the left parietotemporal system  involved in analysis and decoding of words and the left occipitotemporal area which  is responsible  for automatic access to whole words and is a critical for fluent reading.

According to recent studies led by Dean Bragonier a social entrepreneur in the EdTech space working with Harvard University, Tufts University and the Carroll School, forty percent of all self-made millionaires and even the rocket scientists at NASA are people who live with dyslexia. This statistic reveals that countless brilliant people have found alternative ways to succeed and thrive in life, despite their obstacles with reading comprehension and writing.

Extraordinarily these outstanding individuals must have creatively improvised and solved a problem in their path somehow.  Dean Brogonier in his 2015  talk, speaks about his struggles as a dyslexic person, saying that “we have difficult time decoding and identify squiggly lines, and stringing those sounds together to compose a word.  This takes little longer to associate.” However, later on in his Tedtalk he also explains that the research community studying dyslexia now knows that dyslexics are kinetic learners, meaning that learning by movements is their best way to effectively learn.

Apparently scientific  research today illustrates for us,  that the outer layer of the human brain, called the cortex has mini columns that work like telephone poles. These mini columns are stringed together by axons, and are the cables that help transfer information to the brain to process and understand.  In dyslexic  brains however, the mini columns are spaced vary, vary far apart.  As a result, axon lengths are significantly longer.

Although  this may make reading comprehension harder,  somehow it actually provides  some significant cognitive advantages.  According to Bragonier’s research with Harvard University, Tufts University and the Carroll School,  “Dyslexics have an ability to look at a situation and identify seemingly different pieces of information and to blend those into a narrative, or a tapestry, that makes sense to  them that most people can’t see.”   In layman’s terms they are very creative problem-solvers.

Ironically in his Tedtalk, Bragonier  explains that “that  thirty five percent of people who have dropped out of high school were dyslexic,” and further more fifty percent of all drug and alcohol abusers suffered as kids who had dyslexia”.  This points to the problem that many of today’s leading institutions don’t recognize that there are many different kinds of people, who must learn in different ways, despite standardized education,  and  that they may be abandoned by their lack of ability to conform to the acceptable scores of society.  Perhaps if educators and institutions payed more attention to understanding, fostering, and training these people, there could be more out-of-the-box,  creative problem-solvers  to contribute to  society and  impact the global condition.

Research on dyslexia is fairly new in the educational and medical field, but its current findings have helped thousands of people cope  with communication and finding success in life. According to dyslexiahistory.web.ox.ac.uk,  a world research foundation dedicated to understanding dyslexia, the disability was first diagnosed in 1877 by a German physician named Adolph Kussmaul, who originally called it  ‘”word blindness”.   Although he just scraped the surface of  understanding  a “different way of mind”,  he helped start a dialogue in which we now know  that there is much more to this condition and that people with dyslexia  actually do see letters.  They just perceive and receive symbols in different ways.

It is 130 years since the term dyslexia’ was coined by Rudolf Berlin, a German ophthalmologist and professor in Stuttgart.  Berlin introduced the concept into the medical literature and the medical community, by observing  the difficulties faced by some of his adult patients in reading the printed word.  He could find no problem with their vision.  He theorized that their difficulties must had been caused by some physical change in the brain, even if he didn’t know what it was.  His research then started a frenzy of  studies that led to the striking results  that institutions of education could not deny.

In 1970, Critchley published, The Dyslexic Child, which identified “developmental dyslexia” as an issue requiring urgent official attention. In 1972  Sandhya  Naidoo,  a British educational psychologist published Specific Dyslexia, the first account to make a systematic comparison of dyslexic and non-dyslexic children.  This study remains instructive and  is important today.  Focusing on children’s development in literature, Naidoo argued that, “Preventive and supportive steps taken early are immeasurably more humane and fruitful than attempts to remedy a problem which becomes increasingly complex as the child grows older.”

After the dawning of the industrial revolution  and the invention of the printings press for example, we have never been the same again.  The immediate effect of the printing press was to multiply the output and cut the costs of books.  Printing also facilitated the dissemination and preservation of knowledge in standardized form” says HistoryGuide.org in an article about the printing press. “Printing stimulated the literacy of  lay people and eventually came to have a deep and lasting impact on their private lives.”

In a sense this is true because the industrial revolution impacted everyone and created a long lasting effect of standardized,  mass produced material, whose  value is limited and based on the ability to keep up with standardized speed.  This is how many schools today – still grade and determine  their students success rates.   According to an article, by Tim Walker  Survey: 70 Percent Of Educators Say State Assessments are Not Developmentally Appropriate  states that results from a 2015 survey of more than 1500 NEA members teaching the grades and subjects required to be tested under  No Child Left Behind (grades 3-8 and 10-12 in ELA and math) indicate that a vast majority of  educators – seventy percent to be exact – do not believe their primary state assessment is developmentally appropriate for their students.

Only thirteen percent agreed that the NCLB-required state standardized tests their students took met that standard.   Nationwide, teachers are beginning to believe that children and students should not be treated like mass produced products,  but more like potential world problems solvers that need to be encouraged and fostered.   “Teachers learn during their training and through experience that each child’s readiness to learn new skills and concepts varies by many factors in addition to age.   They also know that each child’s ability to learn something new depends on both the individual child’s prior experiences and skills and on the particular concept being taught.

While one child may be developmentally ready to learn multiplication,  another child of the same age may not.  However, the child who is not ready for multiplication may be ready to learn to play a musical instrument while the other child may not. New learning requires that a child has the background and prior skills to learn.”   Walker’s excerpt from this teachers study illustrates the urgency and need for newer and alternative ways of teaching, that meet a dyslexic persons needs early in their development,  before the concrete mix of their personality solidifies, and they adopt feelings of shame or guilt from inadequacy.

In conclusion, its fair that a lot of people do not know what Dyslexia is, but given our day and age, institutions should know better now, and work to incorporate teaching methods that can cater to the kinetic learning needs of a dyslexic child.   Students and adults with dyslexia may be challenged by their disability, but with training and encouragement, they can learn how to be the best they can be, and use their innate creative inclination to help problem solve  problems in our  advancing world .

An Issue Of Dyslexia Discovered. (2019, Nov 17). Retrieved from https://papersowl.com/examples/an-issue-of-dyslexia-discovered/

The Disorder of Dyslexia

Dyslexia as a Common Disease

Essay about what is Dyslexia