Down Syndrome and the most Common Types 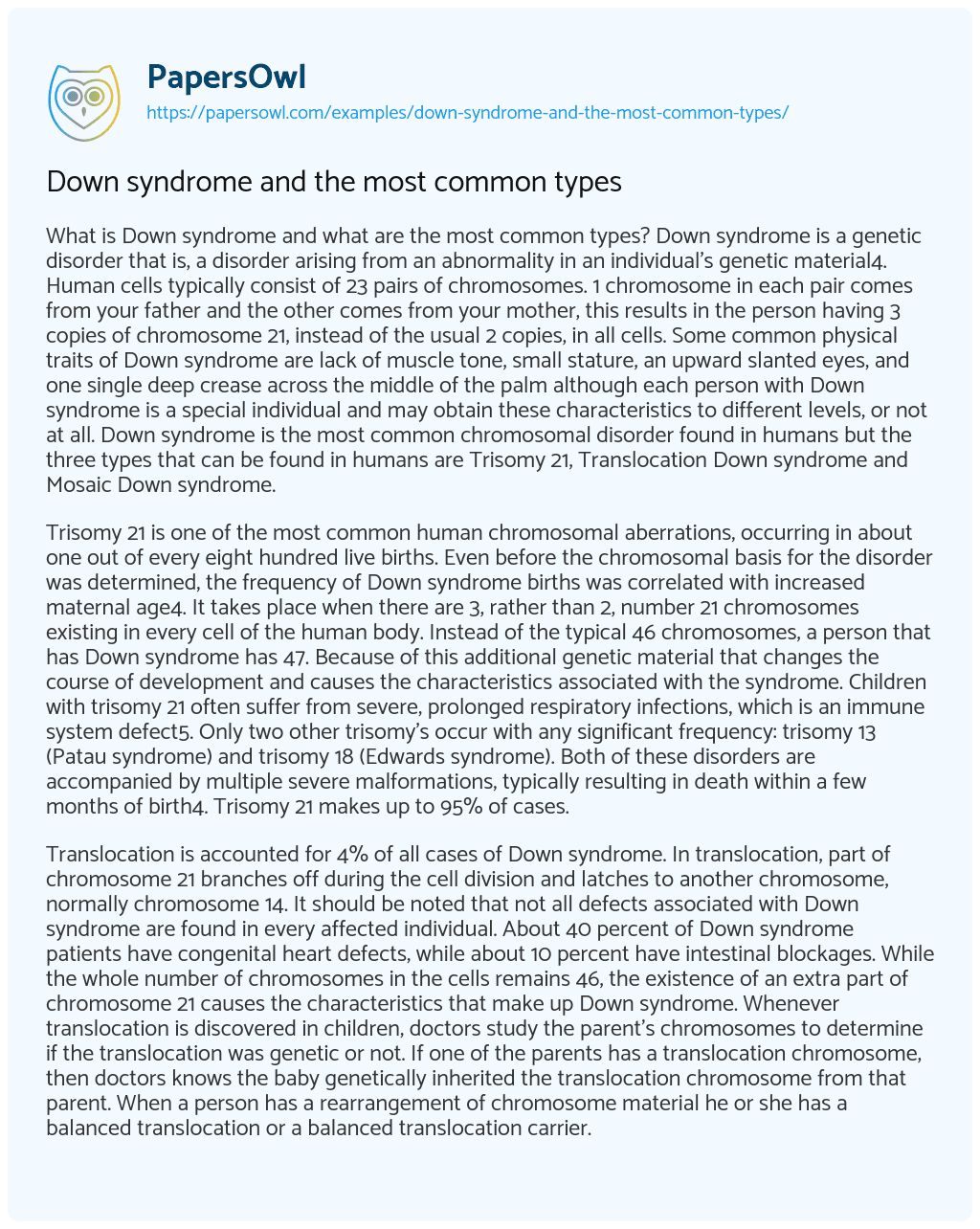 Trisomy 21 is one of the most common human chromosomal aberrations, occurring in about one out of every eight hundred live births. Even before the chromosomal basis for the disorder was determined, the frequency of Down syndrome births was correlated with increased maternal age4. It takes place when there are 3, rather than 2, number 21 chromosomes existing in every cell of the human body. Instead of the typical 46 chromosomes, a person that has Down syndrome has 47. Because of this additional genetic material that changes the course of development and causes the characteristics associated with the syndrome. Children with trisomy 21 often suffer from severe, prolonged respiratory infections, which is an immune system defect5. Only two other trisomy’s occur with any significant frequency: trisomy 13 (Patau syndrome) and trisomy 18 (Edwards syndrome). Both of these disorders are accompanied by multiple severe malformations, typically resulting in death within a few months of birth4. Trisomy 21 makes up to 95% of cases.

Mosaicism, or Mosaic Down syndrome, is one of the rare forms of Down syndrome. Mosaicism happens when nondisjunction of the chromosome 21 takes place in one, but not all, of the primary cell divisions after fertilization and makes up about 1% of all cases of Down syndrome. When this happens, there is a mixture of 2 types of cells, some containing the normal 46 chromosomes and the others containing 47. People with this often, but not in all cases, have less symptoms of Down syndrome because some are normal cells. This mosaic of abnormal and normal cells is created by abnormal cell division after fertilization. When children are born with Down syndrome, the doctor takes a sample of blood to do a chromosome study. Although many children with Down syndrome have happy dispositions, a significant number have behavioral problems that can consume the energies of the parents, to the detriment of other children.3 Mosaicism is typically explained by a percentage. Usually , they analyze 20 different cells in a chromosome study. A baby could be said to have mosaic Down syndrome if 5 out of 20 cells have the usual number of 46 chromosomes. The other cells 15 have a number of 47 chromosomes due to one extra chromosome 21. There are developing studies that will discover if there is anything in common with in the health of people with mosaic Down syndrome, based on how the mosaicism occurred. Studies have also been looking at if the percentage of mosaicism can tell if the baby’s IQ or tell if there will be a defect in the heart. Those studies have showed that the percentage of mosaicism doesn’t predict outcome accurately. The risk of having a chromosome defects in a pregnancy is widely based on the women’s age at the time they had the baby. It goes up every year with increasing age.

Down syndrome and the most common types. (2019, Mar 31). Retrieved from https://papersowl.com/examples/down-syndrome-and-the-most-common-types/

The Potential of Chromosomal Therapy in down Syndrome

Parental Origin of Syndrome down