The Potential of Chromosomal Therapy in down Syndrome 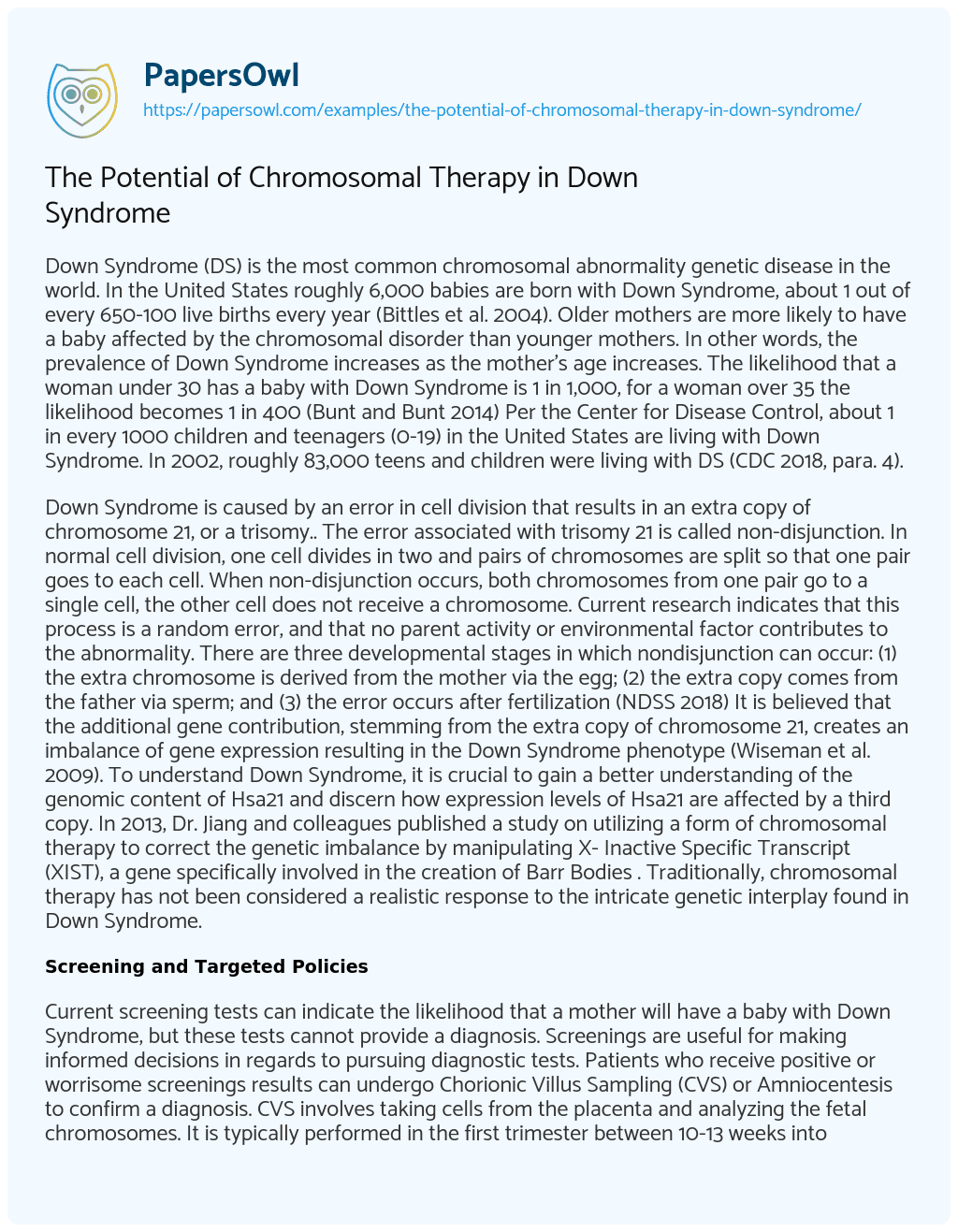 Down Syndrome (DS) is the most common chromosomal abnormality genetic disease in the world. In the United States roughly 6,000 babies are born with Down Syndrome, about 1 out of every 650-100 live births every year (Bittles et al. 2004). Older mothers are more likely to have a baby affected by the chromosomal disorder than younger mothers. In other words, the prevalence of Down Syndrome increases as the mother’s age increases. The likelihood that a woman under 30 has a baby with Down Syndrome is 1 in 1,000, for a woman over 35 the likelihood becomes 1 in 400 (Bunt and Bunt 2014) Per the Center for Disease Control, about 1 in every 1000 children and teenagers (0-19) in the United States are living with Down Syndrome. In 2002, roughly 83,000 teens and children were living with DS (CDC 2018, para. 4).

Down Syndrome is caused by an error in cell division that results in an extra copy of chromosome 21, or a trisomy.. The error associated with trisomy 21 is called non-disjunction. In normal cell division, one cell divides in two and pairs of chromosomes are split so that one pair goes to each cell. When non-disjunction occurs, both chromosomes from one pair go to a single cell, the other cell does not receive a chromosome. Current research indicates that this process is a random error, and that no parent activity or environmental factor contributes to the abnormality. There are three developmental stages in which nondisjunction can occur: (1) the extra chromosome is derived from the mother via the egg; (2) the extra copy comes from the father via sperm; and (3) the error occurs after fertilization (NDSS 2018) It is believed that the additional gene contribution, stemming from the extra copy of chromosome 21, creates an imbalance of gene expression resulting in the Down Syndrome phenotype (Wiseman et al. 2009). To understand Down Syndrome, it is crucial to gain a better understanding of the genomic content of Hsa21 and discern how expression levels of Hsa21 are affected by a third copy. In 2013, Dr. Jiang and colleagues published a study on utilizing a form of chromosomal therapy to correct the genetic imbalance by manipulating X- Inactive Specific Transcript (XIST), a gene specifically involved in the creation of Barr Bodies . Traditionally, chromosomal therapy has not been considered a realistic response to the intricate genetic interplay found in Down Syndrome.

Current screening tests can indicate the likelihood that a mother will have a baby with Down Syndrome, but these tests cannot provide a diagnosis. Screenings are useful for making informed decisions in regards to pursuing diagnostic tests. Patients who receive positive or worrisome screenings results can undergo Chorionic Villus Sampling (CVS) or Amniocentesis to confirm a diagnosis. CVS involves taking cells from the placenta and analyzing the fetal chromosomes. It is typically performed in the first trimester between 10-13 weeks into the pregnancy. (Mayo Clinic, 2018) Amniocentesis involves sampling the amniotic fluid surrounding the fetus utilizing a needle that is inserted into the mother’s uterus. The fetal chromosomes are then analyzed to determine a diagnosis. This test is performed in the second trimester, after 15 weeks of pregnancy(Mayo Clinic, 2018). Both tests carry very low risk of miscarriage.(Shulman and Elias 1993) For in-vitro fertilization, preimplantation genetic diagnosis is available to test for genetic abnormalities. These types of tests can assist families establish plans and prepare for the implications of Down Syndrome.

Current legislation states that screening for Down Syndrome is non-compulsory, meaning prospective parents have access to these tests but do not have to opt for them. The American College of Obstetricians and Gynecologists recommend that all pregnant women, regardless of age be offered the option of undergoing screening and diagnostic tests.( Mayo Clinic 2018) Providers should especially bring up these important examinations for mothers over the age of 30, as a precaution of increased DS prevalence in older age. Healthcare providers should educate parents over 30 about the risks, benefits, and meanings of the results. This is important because parents with advanced knowledge of potential DS babies can make informed decisions and plan for whatever course of action they ultimately choose. Physicians in several states are required to review and assess patients on an ongoing basis throughout childhood. (Bunt and Bunt 2014) Areas for review include personal support for family, participation in family-centered medical homes, nutrition and activity to maintain appropriate weight, injury and abuse prevention with special consideration of developmental skills, and age specific DS related medical and developmental skills.

There are three forms of trisomy 21, each resulting in varying levels of symptoms and issues. Complete trisomy 21 occurs when the egg or sperm receives an extra chromosome during formation. The entire copy of the chromosome is seen in all of the individual’s cells. This is the most prevalent form of trisomy 21. Mosaic trisomy occurs when most of the cells in the body have the extra chromosome, but some do not. This can occur when the error in cell division takes place early in development but after a normal egg and sperm combine. The symptoms of mosaic trisomy vary depending on how many cells have the extra chromosome and may differ from someone who has complete or translocation trisomy. The last chromosomal change is termed translocation trisomy. This occurs when component of an extra copy adheres to another chromosome and is transmitted into other cells during division. There does not appear to be medical or cognitive differences between individuals with complete trisomy and translocation trisomy (NDSS 2018)

Individuals with Down Syndrome present with a variety of physical and mental characteristics. Some of the most distinguishable characteristics are physical traits such as a small chin, poor muscle tone, a flat nasal bridge, a single crease of the palm, slanted eyes, and a protruding due to a small mouth and large tongue(Asim et al 2015). DS is also associated with a number of detrimental conditions that may present include congenital heart defects, leukemia, Alzheimer’s disease, Hirschsprung disease and hearing loss (Asim et al 2015). Depending on the extent of DS presented in an individual, families may need to have a team of specialists to provide adequate care meeting the specific needs of the person. A family should consider the benefits of involving professionals such as a primary care pediatrician to coordinate treatment, a pediatric cardiologist, a pediatric gastroenterologist, a neurologist, a physical therapist, and a speech pathologist. DS affected individuals may also need special education or assistance transitioning into adulthood, and targeted stimulation to help develop motor, language, and social skills.

One of the major complications of Down Syndrome research is the intricate genetic interplay of the aforementioned components. Research involving the X-inactive specific transcript (XIST) made important strides in circumventing the complexities and unknowns of genetic interactions. X-inactive specific transcript (XIST) is an RNA gene found on the X chromosome of placental mammals. XIST is a natural mechanism that aims to compensate the difference in dosage of X-linked gene copies between mammalian males and females. (Hattori 2000). In early development, XIST RNA induces several architectural and heterochromatin modifications which transcriptionally inactivate an X chromosome. (Heard 2005). Ultimately, the process transforms the additional chromosome into a barr body, a condensed inactive x-chromosome. Previous studies provide evidence of a specific DNA sequence specific to XIST function, since certain human genes escape X-inactivation (Hall et al 2002). Hall and colleagues chose a zinc finger nuclease targeted addition of an inducible XIST transgene to Chromosome 21 in pluripotent stem cells derived from DS patients. The results illustrated an impressive competence of most chromosome 21 genes to undergo epigenetic modification and silencing in response to an RNA that evolved to silence the X-chromosome (Hall et al 2002). In an effort to investigate how specifically they could target alleles, Hall and company, managed to silence the Amyloid Precursor Protein (APP), mutations in which cause accumulation of beta-amyloid leading to onset of Alzheimer disease.

While previous research has focused on targeted causes of Down Syndrome, the ability to silence an entire chromosome would altogether avoid the complexities of specific gene and epigenetic interactions. Although safe and specific mechanisms for inducing trisomy silencing in humans must still be developed, this study demonstrates that Down Syndrome is no longer an insurmountable challenge. Trisomy silencing has an immediate impact in understanding the cellular pathways deregulated in DS, and studying cell types relevant to DS therapies. ( Jiang et al 2013).

The Potential of Chromosomal Therapy in Down Syndrome. (2019, Aug 03). Retrieved from https://papersowl.com/examples/the-potential-of-chromosomal-therapy-in-down-syndrome/

Down Syndrome and the most Common Types

People with down Syndrome

Parental Origin of Syndrome down