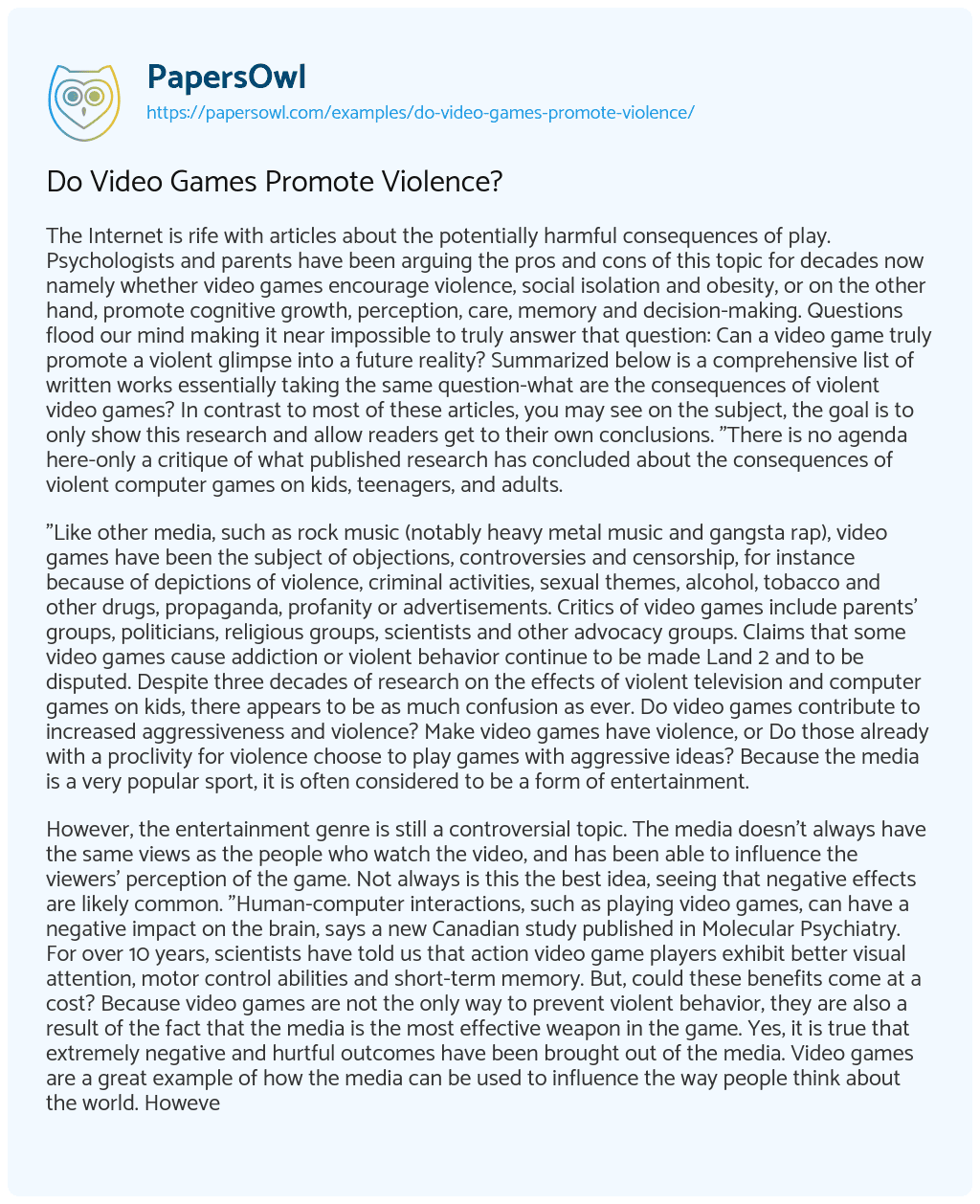 The Internet is rife with articles about the potentially harmful consequences of play. Psychologists and parents have been arguing the pros and cons of this topic for decades now namely whether video games encourage violence, social isolation and obesity, or on the other hand, promote cognitive growth, perception, care, memory and decision-making. Questions flood our mind making it near impossible to truly answer that question: Can a video game truly promote a violent glimpse into a future reality? Summarized below is a comprehensive list of written works essentially taking the same question-what are the consequences of violent video games? In contrast to most of these articles, you may see on the subject, the goal is to only show this research and allow readers get to their own conclusions. “There is no agenda here-only a critique of what published research has concluded about the consequences of violent computer games on kids, teenagers, and adults.

“Like other media, such as rock music (notably heavy metal music and gangsta rap), video games have been the subject of objections, controversies and censorship, for instance because of depictions of violence, criminal activities, sexual themes, alcohol, tobacco and other drugs, propaganda, profanity or advertisements. Critics of video games include parents’ groups, politicians, religious groups, scientists and other advocacy groups. Claims that some video games cause addiction or violent behavior continue to be made Land 2 and to be disputed. Despite three decades of research on the effects of violent television and computer games on kids, there appears to be as much confusion as ever. Do video games contribute to increased aggressiveness and violence? Make video games have violence, or Do those already with a proclivity for violence choose to play games with aggressive ideas? Because the media is a very popular sport, it is often considered to be a form of entertainment.

However, the entertainment genre is still a controversial topic. The media doesn’t always have the same views as the people who watch the video, and has been able to influence the viewers’ perception of the game. Not always is this the best idea, seeing that negative effects are likely common. “Human-computer interactions, such as playing video games, can have a negative impact on the brain, says a new Canadian study published in Molecular Psychiatry. For over 10 years, scientists have told us that action video game players exhibit better visual attention, motor control abilities and short-term memory. But, could these benefits come at a cost? Because video games are not the only way to prevent violent behavior, they are also a result of the fact that the media is the most effective weapon in the game. Yes, it is true that extremely negative and hurtful outcomes have been brought out of the media. Video games are a great example of how the media can be used to influence the way people think about the world. However, that is not always used to justify the violence against children. The media is a very powerful tool for the development of violent video games.

But what is the difference between the two? The first thing that we need to do is to understand the effects of video games on the lives of children. Hasn’t the media been able to make a positive impact on the child’s life? Maybe in some ways, but not all. I don’t agree completely with that argument because it is a very controversial topic. There are many reasons why children should not be exposed to violent video games. One of the most common arguments against the media is that it is a good idea to make sure the viewer is aware of the consequences of the actions. The media is trying to portray the violence in video game, and that is wrong. The media should be able to understand the effects of video games on the viewers. Because video game violence is an increasing problem in today’s society with violence as one of the most popular topics, we find that playing violent video games alters men’s mental function, makes teenagers drive recklessly, and may lead to aggression. Many people attempt to reason that there is a conflict in the outcomes between behaviors after engaging with video games. To some, it looks dubious that such violence and hostility will be induced from playing video games on a nineteen-inch TV screen.

There are others who completely disagree with this logic. People do not only see television games, but they interact with them. The theme of profiling school shooters by the video games they play comes from the notion that playing violent video games increases a person’s aggression level, which in turn, will make people to commit extreme acts of violence, such as a school shooting. There is little to no information supporting the theory, but it has become a vivid profile used by the media since the Columbine Massacre in 1999. A sum of past research on video game violence see that video games make little to no effect on aggression. Again, the holds the idea that although it is a popular belief to connect school shooters to being violent video gamers, the misconception is frequently attributable to third variables and has not been endorsed by research on the link between aggression and gambling. Therefore, we are clearly able to see that the video game is a very controversial topic.

It is a common belief that the media is a major factor in the development of violent behavior. In fact, many people believe that video games are the most effective way to increase the number of violent acts. Studies have shown that people who commit violent crimes seem to have some sort of history in playing violent video games or watching violent movies. Those who are pulled into the realm of virtual reality are very susceptible to violence and may very well end up leading the opposite of a successful life. So, we may ask, what can we do about this? What can be done to help these children understand the world around them? How does the media affect the lives of the people who are watching the video. The first step is to understand the effects of violent video games on children’s lives. As the negative effects of video games are beginning to be shown, they might be able , if not impossible, to make a decision about what is happening in the future. They can be guided with a watchful eye on the video game industry, and then discuss how they will respond to the violent behavior of the children. Slowly but surely, evidence will show how they start to adapt to their own behavior and the way they react to the situation.