Diabetes a Matter of the Heart 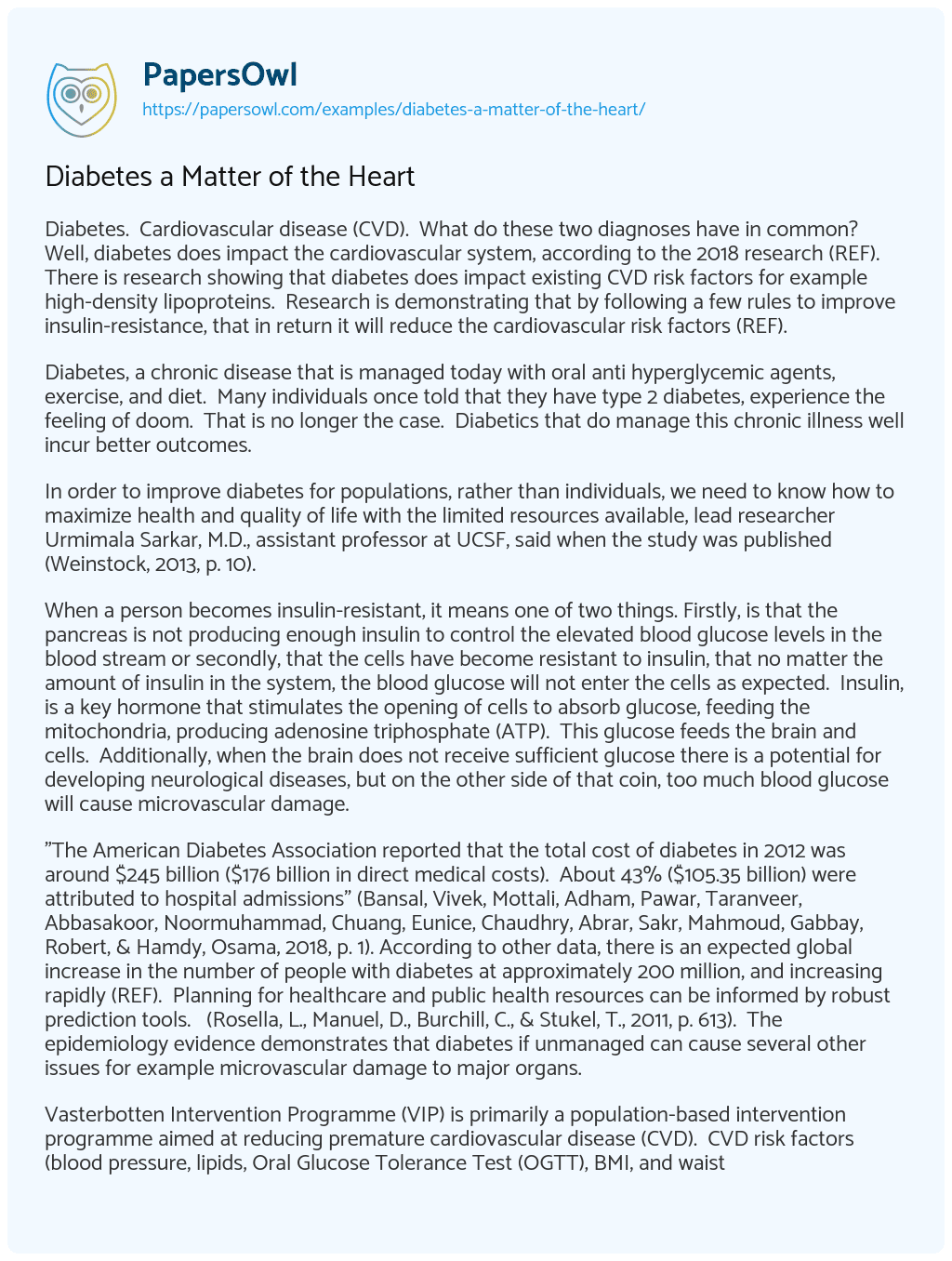 Diabetes, a chronic disease that is managed today with oral anti hyperglycemic agents, exercise, and diet.  Many individuals once told that they have type 2 diabetes, experience the feeling of doom.  That is no longer the case.  Diabetics that do manage this chronic illness well incur better outcomes.

In order to improve diabetes for populations, rather than individuals, we need to know how to maximize health and quality of life with the limited resources available, lead researcher Urmimala Sarkar, M.D., assistant professor at UCSF, said when the study was published (Weinstock, 2013, p. 10).

When a person becomes insulin-resistant, it means one of two things. Firstly, is that the pancreas is not producing enough insulin to control the elevated blood glucose levels in the blood stream or secondly, that the cells have become resistant to insulin, that no matter the amount of insulin in the system, the blood glucose will not enter the cells as expected.  Insulin, is a key hormone that stimulates the opening of cells to absorb glucose, feeding the mitochondria, producing adenosine triphosphate (ATP).  This glucose feeds the brain and cells.  Additionally, when the brain does not receive sufficient glucose there is a potential for developing neurological diseases, but on the other side of that coin, too much blood glucose will cause microvascular damage.

“The American Diabetes Association reported that the total cost of diabetes in 2012 was around $245 billion ($176 billion in direct medical costs).  About 43% ($105.35 billion) were attributed to hospital admissions” (Bansal, Vivek, Mottali, Adham, Pawar, Taranveer, Abbasakoor, Noormuhammad, Chuang, Eunice, Chaudhry, Abrar, Sakr, Mahmoud, Gabbay, Robert, & Hamdy, Osama, 2018, p. 1). According to other data, there is an expected global increase in the number of people with diabetes at approximately 200 million, and increasing rapidly (REF).  Planning for healthcare and public health resources can be informed by robust prediction tools.   (Rosella, L., Manuel, D., Burchill, C., & Stukel, T., 2011, p. 613).  The epidemiology evidence demonstrates that diabetes if unmanaged can cause several other issues for example microvascular damage to major organs.

The microcirculation of the human body is a wonderful compensatory mechanism. One of first compensatory mechanisms of the individual in an attempt to self-adjust the glucose levels in the body appropriately every second of every day.  When the major organs that regulate the hormone insulin or the control of blood glucose collapses, the body wreaks havoc.  At this time the body has made many attempts to survive the assault from elevated glucose levels, but it begins to manifest this surrender in other forms.  One becomes thirsty, experiences weight loss, and is not satiated after eating a meal.   The reasons for the mentioned symptoms are because the body is still attempting to rid itself of elevated sugar levels.  This is the only way it knows to notify the person that there is a problem within.  Eventually the body will not manifest as many symptoms and an individual may suffer a stroke or heart attack as a result.  Diabetes is one of the most common chronic diseases.  It has caused multiple disabilities and deaths.  Approximately 1.7 million new diabetes cases are predicted for the subsequent 9 years with significant variability by age, ethnicity, education and levels of obesity (Rosella, 2018).  With diabetes comes neuropathy of the extremities or heart.  The pain receptors become immune to any abnormal sensations because they have normalized the glucose assault on them.  This is the reason diabetics will not realize that they have an ulcer in their foot which now is causing an infection of the foot.

In one article that focuses on personality of the newly diagnosed individual, it mentions that the personality of an older person is more optimistic about their perception in “surviving” and coping with the disease longer than younger adults with type 2 diabetes (Imayama, 2011).    In our sample, age was positively associated with both health-related quality of life (HRQL) and life-satisfaction (LS), indicating younger adults are at higher risk for poor quality of life (QoL), and may benefit form additional support (Imayama, 2011).

Healthy behaviours are believed to have an impact on decreasing the chances of developing diabetes.  Trials of intensive lifestyle behaviour interventions targeting individuals with impaired glucose tolerance (IGT) typically promote physical activity and healthy eating and have led to sustained reductions in type 2 diabetes (Long, 2015).  The diabetic goes to the health care provider who typically mentions healthy eating and exercise.  Yet with all these recommendations a person will not motivate themselves to do it.  Once the diagnosis of possible amputation of the foot or leg, or maybe you hear the words, “you had a heart attack”, may convince the person to change their lifestyle behaviour.  One suggestion the following, “Having a BMI of

The only suggestion and best to resolve or at least decrease the incidence of diabetes is to eat healthy and exercise.

Six dichotomous behaviour variable were derived according to the achievement of baseline goals: BMI = 15 g/4184 kj, non-smoker/snuff user and light/moderate daily alcohol intake of greater than 0 g and less than 20 g per day (Long, 2015).

If we all did this only a daily basis we could rid ourselves of this chronic disease, but we don’t, I am not sure why.  It is very costly and causes a lot of harm to our bodies.  Understanding also that the medications for this disease are expensive and when you have a problem there is an admission to the hospital.  There are solutions and the public health organizations are doing research to better reach the populations instead of only the individuals.

Diabetes a Matter of the Heart. (2019, May 21). Retrieved from https://papersowl.com/examples/diabetes-a-matter-of-the-heart/

What should you Know about Diabetes