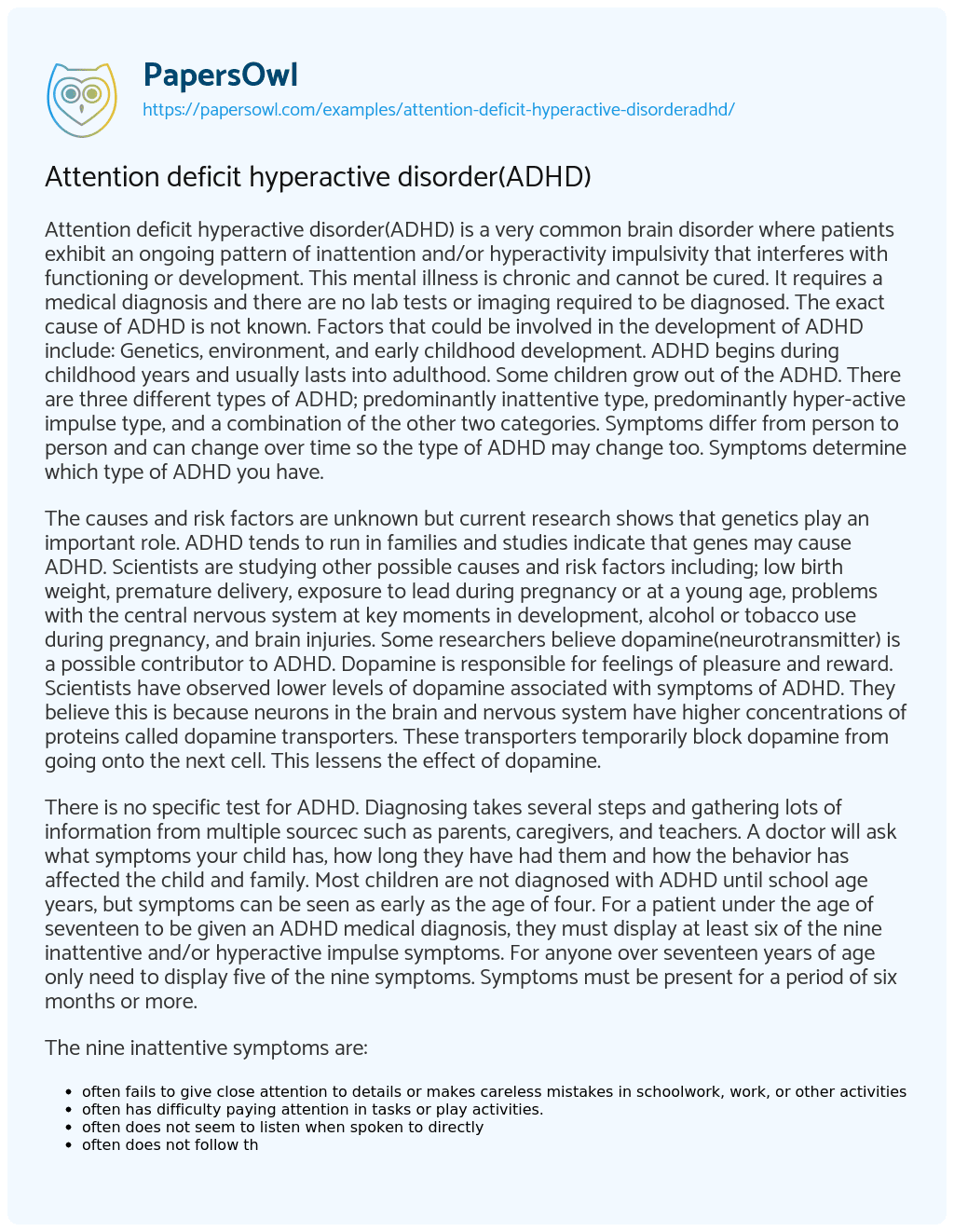 Attention deficit hyperactive disorder(ADHD) is a very common brain disorder where patients exhibit an ongoing pattern of inattention and/or hyperactivity impulsivity that interferes with functioning or development. This mental illness is chronic and cannot be cured. It requires a medical diagnosis and there are no lab tests or imaging required to be diagnosed. The exact cause of ADHD is not known. Factors that could be involved in the development of ADHD include: Genetics, environment, and early childhood development. ADHD begins during childhood years and usually lasts into adulthood. Some children grow out of the ADHD. There are three different types of ADHD; predominantly inattentive type, predominantly hyper-active impulse type, and a combination of the other two categories. Symptoms differ from person to person and can change over time so the type of ADHD may change too. Symptoms determine which type of ADHD you have.

The causes and risk factors are unknown but current research shows that genetics play an important role. ADHD tends to run in families and studies indicate that genes may cause ADHD. Scientists are studying other possible causes and risk factors including; low birth weight, premature delivery, exposure to lead during pregnancy or at a young age, problems with the central nervous system at key moments in development, alcohol or tobacco use during pregnancy, and brain injuries. Some researchers believe dopamine(neurotransmitter) is a possible contributor to ADHD. Dopamine is responsible for feelings of pleasure and reward. Scientists have observed lower levels of dopamine associated with symptoms of ADHD. They believe this is because neurons in the brain and nervous system have higher concentrations of proteins called dopamine transporters. These transporters temporarily block dopamine from going onto the next cell. This lessens the effect of dopamine.

There is no specific test for ADHD. Diagnosing takes several steps and gathering lots of information from multiple sourcec such as parents, caregivers, and teachers. A doctor will ask what symptoms your child has, how long they have had them and how the behavior has affected the child and family. Most children are not diagnosed with ADHD until school age years, but symptoms can be seen as early as the age of four. For a patient under the age of seventeen to be given an ADHD medical diagnosis, they must display at least six of the nine inattentive and/or hyperactive impulse symptoms. For anyone over seventeen years of age only need to display five of the nine symptoms. Symptoms must be present for a period of six months or more.

The nine inattentive symptoms are:

The nine hyperactive-impulse symptoms are:

Adults diagnosed with ADHD in adulthood had it as a child. Some may have been diagnosed with it and known it while others may have not been diagnosed. There is not many adults that get diagnosed with ADHD. To be diagnosed with ADHD as an adult a doctor may ask about behaviors and symptoms they had as a child, may ask to see report cards to look for comments about behavior, poor focus, lack of effort, or underachievement compared to your potential. The doctor may speak with parents to see if there were any symptoms during childhood. They will ask if anyone in the family has ADHD. Adults with ADHD are more likely to smoke cigarettes, change jobs more frequently, have more speeding tickets, have low self esteem, have relationship problems, use alcohol or drugs, have low motivation, depression, chronic lateness or tardiness, procrastination, or trouble controlling.

Finding the right ADHD treatment is crucial to managing ADHD. Medication is an important part of treating ADHD for a child. Medication can be taken only during school hours or all the time. Medication times are decided by the parent and the physician to best help the child. There is two types of medications for treating ADHD; stimulants and non-stimulants. Central nervous system stimulants are the most common and most widely used type of medication used to treat ADHD. These drugs work by increasing the amounts of dopamine and norepinephrine. These drugs improves the child’s concentration and helps them focus better. Common types of CNS stimulants are: Adderall, Dexedrine, Dextrostat, Focalin, Concerta, and Ritalin. Non stimulant drugs are used when stimulant drugs have not worked or caused side effects the child cannot handle. Some non stimulants work by increasing norepinephrine. Scientists believe norepinephrine helps with attention and memory. These drugs include Strattera and Pamelor. Other non stimulant drugs can help with ADHD, but it is not known how these medications help with ADHD. These include Intuniv and Kapvay.

Several therapy options can help with ADHD. These options should be discussed with the doctor to determine which therapy would be the most beneficial. These therapies include psychotherapy, behavior therapy, social skills training, support groups, and parenting skills training. Research shows behavior therapy is very important to treatment for ADHD. Children with ADHD usually have behaviors that are disruptive to themselves and others. Behavior therapy helps with these problems. Behavior therapy should be started as soon as a child is diagnosed with ADHD. Behavior therapy also gives the parents skills and strategies to help their child with their behaviors. Psychotherapy can help decrease impulsivity by increasing the ability to let go of emotional reactions. Impulsivity results when behavior becomes automatic. Impulsivity can be tamed if you can put one step between an impulse and an action. Psychotherapy can increase the level of functioning for children and adults who struggle with ADHD.

“Children with ADHD might be eligible for special services or accommodations at school under the Individuals with Disabilities in Education Act(IDEA). The US department of Education has developed a resource guide to help understand laws that apply to students with ADHD so they can get the services and education they need.-CDC Parents should speak with their child’s physician to get help with determining eligibility for these programs.