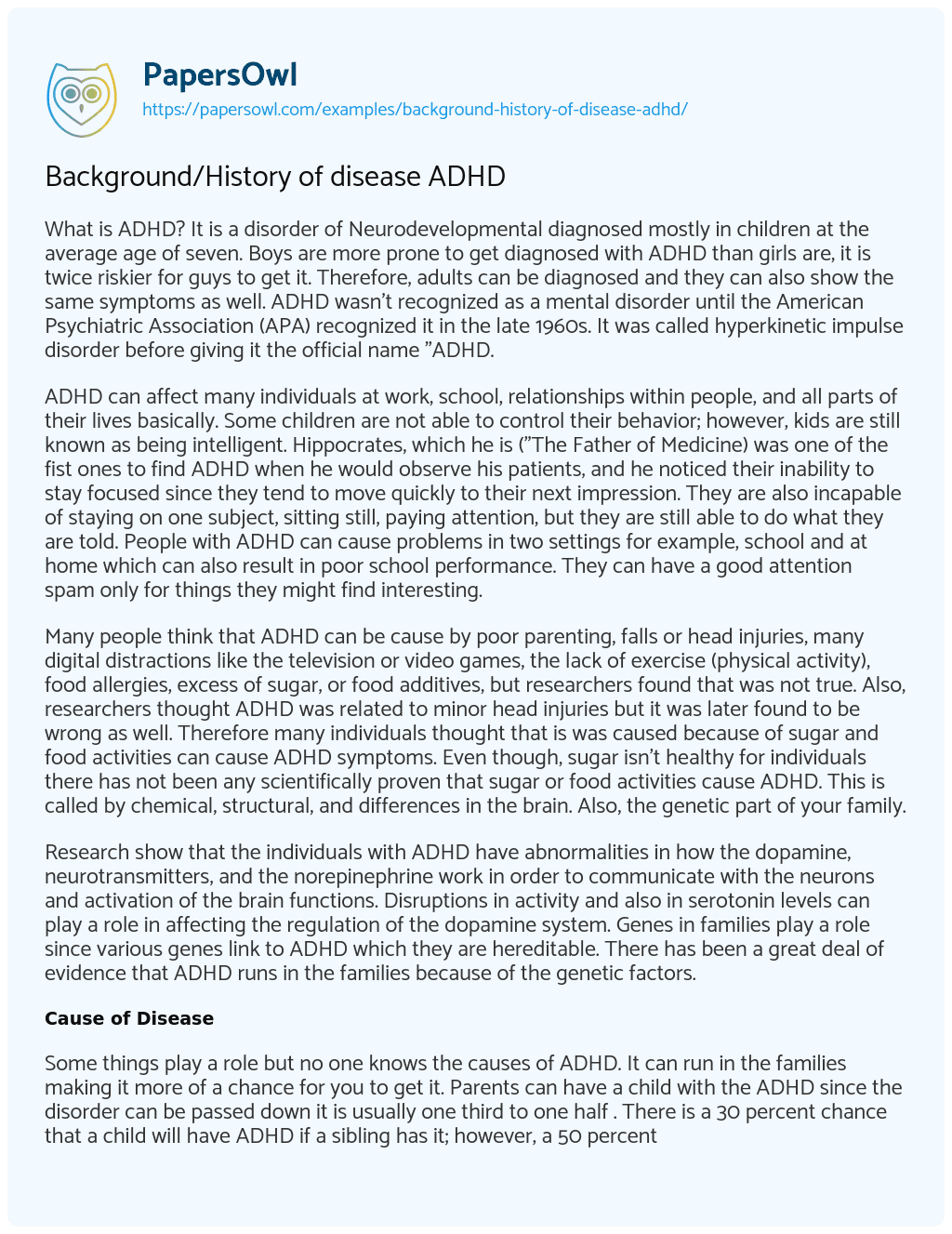 What is ADHD? It is a disorder of Neurodevelopmental diagnosed mostly in children at the average age of seven. Boys are more prone to get diagnosed with ADHD than girls are, it is twice riskier for guys to get it. Therefore, adults can be diagnosed and they can also show the same symptoms as well. ADHD wasn’t recognized as a mental disorder until the American Psychiatric Association (APA) recognized it in the late 1960s. It was called hyperkinetic impulse disorder before giving it the official name “ADHD.

ADHD can affect many individuals at work, school, relationships within people, and all parts of their lives basically. Some children are not able to control their behavior; however, kids are still known as being intelligent. Hippocrates, which he is (“The Father of Medicine) was one of the fist ones to find ADHD when he would observe his patients, and he noticed their inability to stay focused since they tend to move quickly to their next impression. They are also incapable of staying on one subject, sitting still, paying attention, but they are still able to do what they are told. People with ADHD can cause problems in two settings for example, school and at home which can also result in poor school performance. They can have a good attention spam only for things they might find interesting.

Many people think that ADHD can be cause by poor parenting, falls or head injuries, many digital distractions like the television or video games, the lack of exercise (physical activity), food allergies, excess of sugar, or food additives, but researchers found that was not true. Also, researchers thought ADHD was related to minor head injuries but it was later found to be wrong as well. Therefore many individuals thought that is was caused because of sugar and food activities can cause ADHD symptoms. Even though, sugar isn’t healthy for individuals there has not been any scientifically proven that sugar or food activities cause ADHD. This is called by chemical, structural, and differences in the brain. Also, the genetic part of your family.

Research show that the individuals with ADHD have abnormalities in how the dopamine, neurotransmitters, and the norepinephrine work in order to communicate with the neurons and activation of the brain functions. Disruptions in activity and also in serotonin levels can play a role in affecting the regulation of the dopamine system. Genes in families play a role since various genes link to ADHD which they are hereditable. There has been a great deal of evidence that ADHD runs in the families because of the genetic factors.

Some things play a role but no one knows the causes of ADHD. It can run in the families making it more of a chance for you to get it. Parents can have a child with the ADHD since the disorder can be passed down it is usually one third to one half . There is a 30 percent chance that a child will have ADHD if a sibling has it; however, a 50 percent chance if parent has it. If the mother has a hard time during pregnancy, they have a higher risk of ADHD. Also, for the babies that are born premature, or a low birth weight. Also, for the woman that smoke or drink while pregnancy have a high risk of having the disorder.

That is to say that some things that go on in the brain is that neurotransmitters don’t work the same with children or adults that have ADHD. Also, there is differences in the way the nerve pathways work. The Dopamine chemical in the brain can also play an important role since it carries signals between nerves in the brain and it also to movement, sleep, attention, emotions, as well as learning’. In the brain certain parts may be smaller in the children with ADHD compared to the ones that don’t have the disorder.

In adults (adult attention-deficit/ hyperactivity disorder ADHD) is also a health disorder that is also persistence problems, it is hard to pay attention, they also have hyperactivity and impulse behavior. Therefore, adult ADHD can lead to unstable affairs, may do poor in work or school activities, they can also have low self-esteem, and many other problems. Adults with ADHD have it since their infantile but they were just not diagnosed with the disorder and they might not know that they have that disorder. ADHD is only diagnosed if you have trouble in more than one or more subject, and if the indications are severe.

ADHD can be hard to diagnose sometimes because of other conditions, like mood changes, or even anxiety. Some other causes can be the environmental meaning that some environmental factors for example, lead exposure as a child. Another cause can be problems during development, like problems with the central nervous system. Some risk factors that may increase ADHD can be because your blood relatives, like a parent or sibling has it, also if your mother smoked or drank during pregnancy. Also as a child you were exposed to toxins (like lead or is found mainly paint and pipes in buildings or if you were born prematurely.

Other disorders occur along with ADHD and it can be more challenging to identify the treatment, it includes mood disorders, anxiety disorders, other psychiatric disorders, leaning disabilities. Adults with ADHD my have depression as well and a repeated pattern of failure and frustrations can worsen depression. Anxiety disorders can cause nervousness, worry too much about things, and it may get worse with challenges or setbacks. Adults with ADHD may have learning disabilities they may score lower in academic exams than thy should score compared to their age, and because of that it can include problems communicating with others or understanding them.