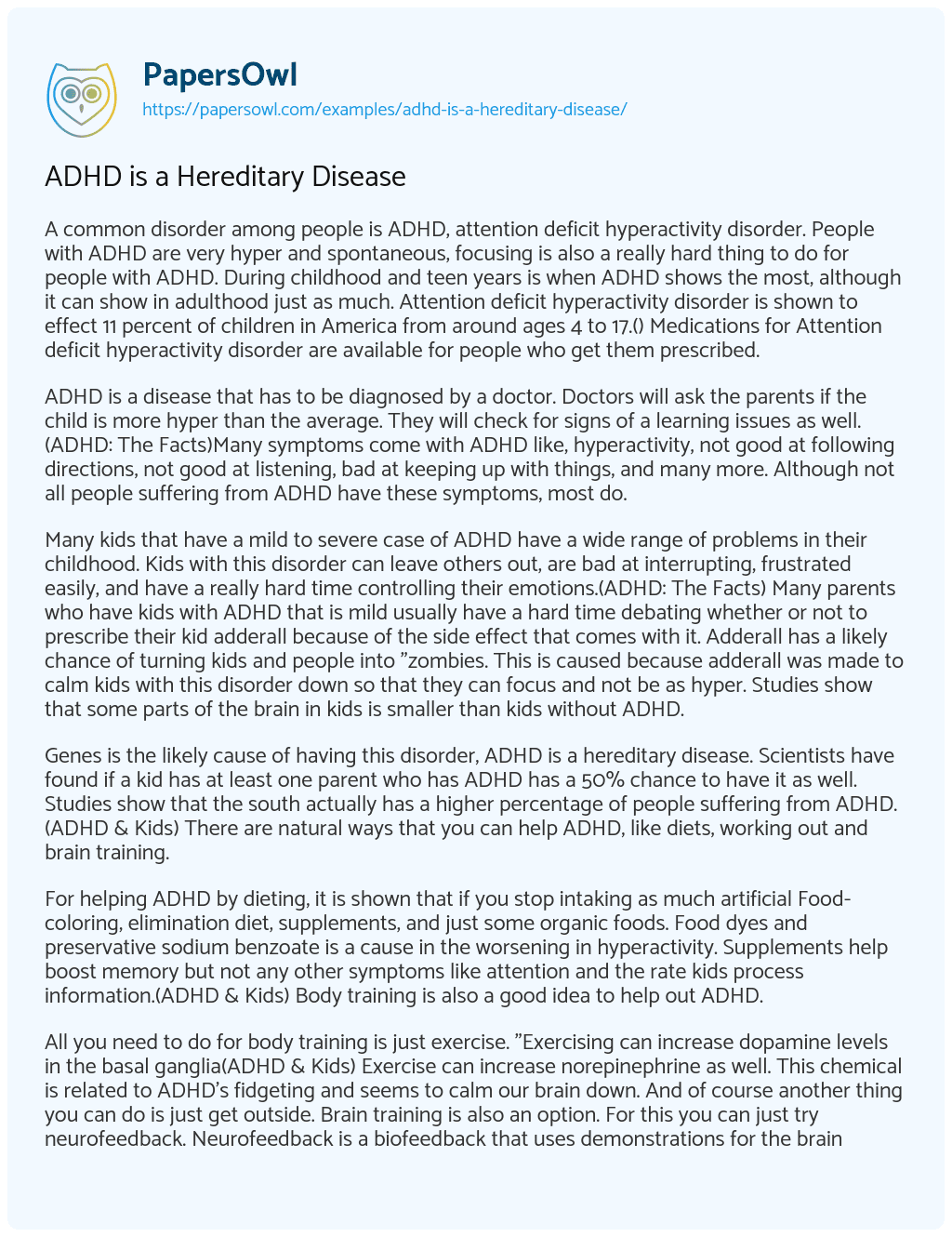 ADHD is a disease that has to be diagnosed by a doctor. Doctors will ask the parents if the child is more hyper than the average. They will check for signs of a learning issues as well. (ADHD: The Facts)Many symptoms come with ADHD like, hyperactivity, not good at following directions, not good at listening, bad at keeping up with things, and many more. Although not all people suffering from ADHD have these symptoms, most do.

Many kids that have a mild to severe case of ADHD have a wide range of problems in their childhood. Kids with this disorder can leave others out, are bad at interrupting, frustrated easily, and have a really hard time controlling their emotions.(ADHD: The Facts) Many parents who have kids with ADHD that is mild usually have a hard time debating whether or not to prescribe their kid adderall because of the side effect that comes with it. Adderall has a likely chance of turning kids and people into “zombies. This is caused because adderall was made to calm kids with this disorder down so that they can focus and not be as hyper. Studies show that some parts of the brain in kids is smaller than kids without ADHD.

Genes is the likely cause of having this disorder, ADHD is a hereditary disease. Scientists have found if a kid has at least one parent who has ADHD has a 50% chance to have it as well. Studies show that the south actually has a higher percentage of people suffering from ADHD.(ADHD & Kids) There are natural ways that you can help ADHD, like diets, working out and brain training.

For helping ADHD by dieting, it is shown that if you stop intaking as much artificial Food-coloring, elimination diet, supplements, and just some organic foods. Food dyes and preservative sodium benzoate is a cause in the worsening in hyperactivity. Supplements help boost memory but not any other symptoms like attention and the rate kids process information.(ADHD & Kids) Body training is also a good idea to help out ADHD.

All you need to do for body training is just exercise. “Exercising can increase dopamine levels in the basal ganglia(ADHD & Kids) Exercise can increase norepinephrine as well. This chemical is related to ADHD’s fidgeting and seems to calm our brain down. And of course another thing you can do is just get outside. Brain training is also an option. For this you can just try neurofeedback. Neurofeedback is a biofeedback that uses demonstrations for the brain to teach itself. Studies show that the video game program called Play Attention that had effects that stuck around up to six months.

ADHD is a Hereditary Disease. (2020, Apr 19). Retrieved from https://papersowl.com/examples/adhd-is-a-hereditary-disease/

What do we Know about ADD and ADHD?