The Use of ADHD Medication in Children and Adolescent 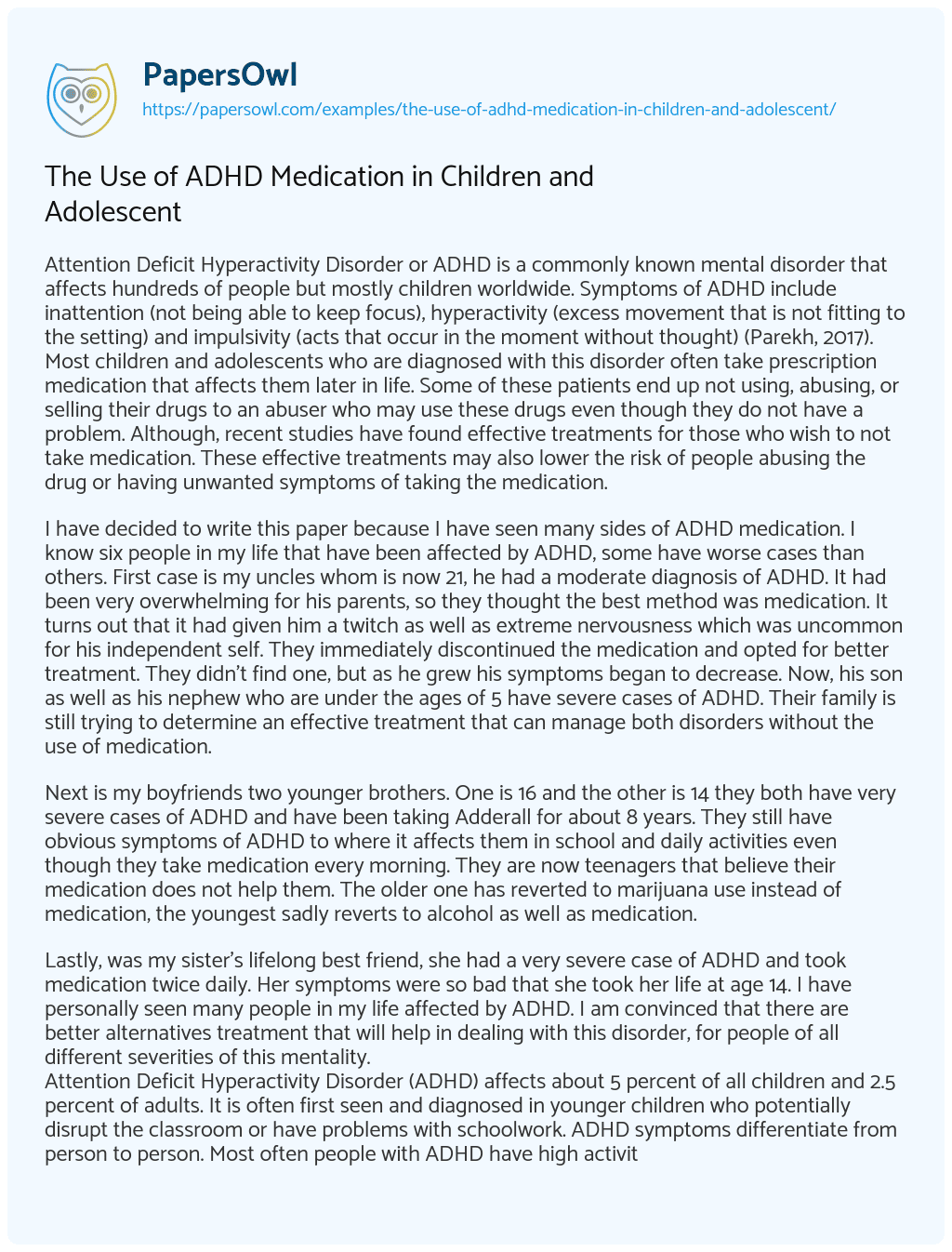 Attention Deficit Hyperactivity Disorder or ADHD is a commonly known mental disorder that affects hundreds of people but mostly children worldwide. Symptoms of ADHD include inattention (not being able to keep focus), hyperactivity (excess movement that is not fitting to the setting) and impulsivity (acts that occur in the moment without thought) (Parekh, 2017). Most children and adolescents who are diagnosed with this disorder often take prescription medication that affects them later in life. Some of these patients end up not using, abusing, or selling their drugs to an abuser who may use these drugs even though they do not have a problem. Although, recent studies have found effective treatments for those who wish to not take medication. These effective treatments may also lower the risk of people abusing the drug or having unwanted symptoms of taking the medication.

I have decided to write this paper because I have seen many sides of ADHD medication. I know six people in my life that have been affected by ADHD, some have worse cases than others. First case is my uncles whom is now 21, he had a moderate diagnosis of ADHD. It had been very overwhelming for his parents, so they thought the best method was medication. It turns out that it had given him a twitch as well as extreme nervousness which was uncommon for his independent self. They immediately discontinued the medication and opted for better treatment. They didn’t find one, but as he grew his symptoms began to decrease. Now, his son as well as his nephew who are under the ages of 5 have severe cases of ADHD. Their family is still trying to determine an effective treatment that can manage both disorders without the use of medication.

Next is my boyfriends two younger brothers. One is 16 and the other is 14 they both have very severe cases of ADHD and have been taking Adderall for about 8 years. They still have obvious symptoms of ADHD to where it affects them in school and daily activities even though they take medication every morning. They are now teenagers that believe their medication does not help them. The older one has reverted to marijuana use instead of medication, the youngest sadly reverts to alcohol as well as medication.

Lastly, was my sister’s lifelong best friend, she had a very severe case of ADHD and took medication twice daily. Her symptoms were so bad that she took her life at age 14. I have personally seen many people in my life affected by ADHD. I am convinced that there are better alternatives treatment that will help in dealing with this disorder, for people of all different severities of this mentality.
Attention Deficit Hyperactivity Disorder (ADHD) affects about 5 percent of all children and 2.5 percent of adults. It is often first seen and diagnosed in younger children who potentially disrupt the classroom or have problems with schoolwork. ADHD symptoms differentiate from person to person. Most often people with ADHD have high activity levels, difficulty in sitting still for a long time, or having limited attention spans. Children whom are later diagnosed with ADHD often show high rates of these symptoms which not only cause problems in school but at home life and even with friends (Parekh, 2017).

There are two different types of ADHD that can be diagnosed. The first is inattentive type ADHD. Inattentive type includes symptoms of not paying attention, making careless mistakes in school or job, has problems staying focused, not listening when spoken to, and not following instructions on schoolwork, chores, or job. Many children who have Inattentive type ADHD also have problems in keeping organized, avoids non-favorable tasks, loses things for daily life, and is easily distracted (Parekh, 2017)

Next is hyperactive/impulsive type or combined type. Children with this type often show many symptoms that include fidgeting, not able to stay seated, runs when inappropriate, unable to play quietly, always “on the go, talks too much, has difficulty waiting their turn, and almost always interrupts or disrupts others (Parekh, 2017)

Parents want what’s best for their children so, they feel that their ADHD diagnosed child should have a more normal life. Upon diagnosis, doctors often offer different recommendations of various pharmaceutical drugs as a form of treatment. This includes many options of Amphetamines, Dextroamphetamines, Dexmethylphenidates, Lisdexamphetamines and even Methylphenidate. Some of these bigger names can be confusing so they have a more common drug name like Evekeo, Adderall, Dexedrine, Focalin, Vyvanse, or Ritalin just to name a few (WebMD, 2017). These drugs are very similar to actual Meth. Although, they may ease some of the ADHD symptoms, even though they may not be for everybody.

All doctors inform their patients about the possibility of getting unwanted side effects from these medications to guide them into choosing what’s best. Although people with severe cases will still use them if in dire need. There can be a downside when it comes to choosing the right medication but for most people, if ADHD medications is used as prescribed, they are not in danger. It is proven that with no treatment, people with ADHD will have poorer long-term outcomes in all aspect of their lives compared to people without ADHD (Wiley, 2012). So, it is important that everyone with an ADHD diagnosis receive proper treatment.

On the other hand, those who decide to abuse this drug will often becoming addicted to them as continued. Abuse is more commonly found in stimulatory class of drugs: like any amphetamine, dextroamphetamine (Adderall), and lisdexamfetamine (Vyvanse) drugs. Amphetamine abuse rates are double than those of methylphenidates. About 6.4% of 10th-graders and 6.8% of 12th-graders used prescription amphetamines nonmedically in 2008 (McCarthy 2010). Stimulatory drugs like Ritalin and Adderall deliver a calming effect for people with ADHD; but will have opposite effects for those who do not need them (WebMD, 2017).

There are many different reasons as to why young adults abuse these simulants but are most often due to the recreational high of euphoric feelings. Amphetamine abuse is extremely common among college students because they use this drug to perform better in school as it can help with calm their attention spans. I have personally heard of Adderall use among my high school friend who attend other college campuses around the state. The rate of this drug use has been increasing over the past years. About 6.4% of full-time college students reported using such stimulants as Adderall nonmedically in the previous year (McCarthy, 2010).

Some adolescents with severe ADHD were more likely to develop a heavy use of alcohol and marijuana while continuing their medication. The risks and side effect of this abuse were at similar rates for both male and females. When these substances were abused at the same time studies showed that hyperactivity levels remained significantly lower with marijuana use, but had an opposite effect with alcohol (Irene Et. Al., 2018).

Misusing and abusing ADHD medication has been shown to have serious side effect during the use and later in life. Most young adults have symptoms that include dangerously high BP, irregular heartbeat, difficulty breathing, seizures and tremors, and mood disorders. At consistently high levels or with repeated use, stimulant-based ADHD drugs can cause stroke and such cognition changes as confusion, hallucinations, delusions, and paranoia (McCarthy, 2010).

In some severe cases where stimulants cause unpleasant side effects or simulant medications is not wanted, there are other medicinal options. These non-simulant medications can all improve a person’s overall concentration and impulse control. There are three main non-simulant drugs that had a better affect. First is Atomoxetine (Strattera), it was the first nonstimulant medication approved by the FDA for children, adolescents, and adults. Clonidine hydrochloride (Kapvay) has also been approved for use alone or in combination with a stimulant to boost the effectiveness. Lastly, Guanfacine (Intuniv) can be used which has been approved for children and teens between ages 6 and 17 (McCarthy, 2010).

As ADHD drug abuse had become more increasing over the years people wanted to find ways that would help people with this disorder without the use of stimulants. They decided to focus more on ADHD therapies that help patients improve their symptoms and attention span. Psychologist often help with this problem by seeing patients to discuss and find new methods that may help a person with this disorder to maintain better control. Therapeutic counseling has shown improvement in people with moderate cases of ADHD (McCarthy, 2010)
Overall, Attention Deficit Hyperactivity Disorder or ADHD is a very common mental disorder. There are often many different treatment courses to help treat this disorder ranging from stimulant medication simple therapeutic counseling. ADHD medication may have its good and bad side to it. Although the course of action all depends on how severe a persons ADHD disorder actually is and what works best for them.

The Use of ADHD Medication in Children and Adolescent. (2019, Sep 20). Retrieved from https://papersowl.com/examples/the-use-of-adhd-medication-in-children-and-adolescent/