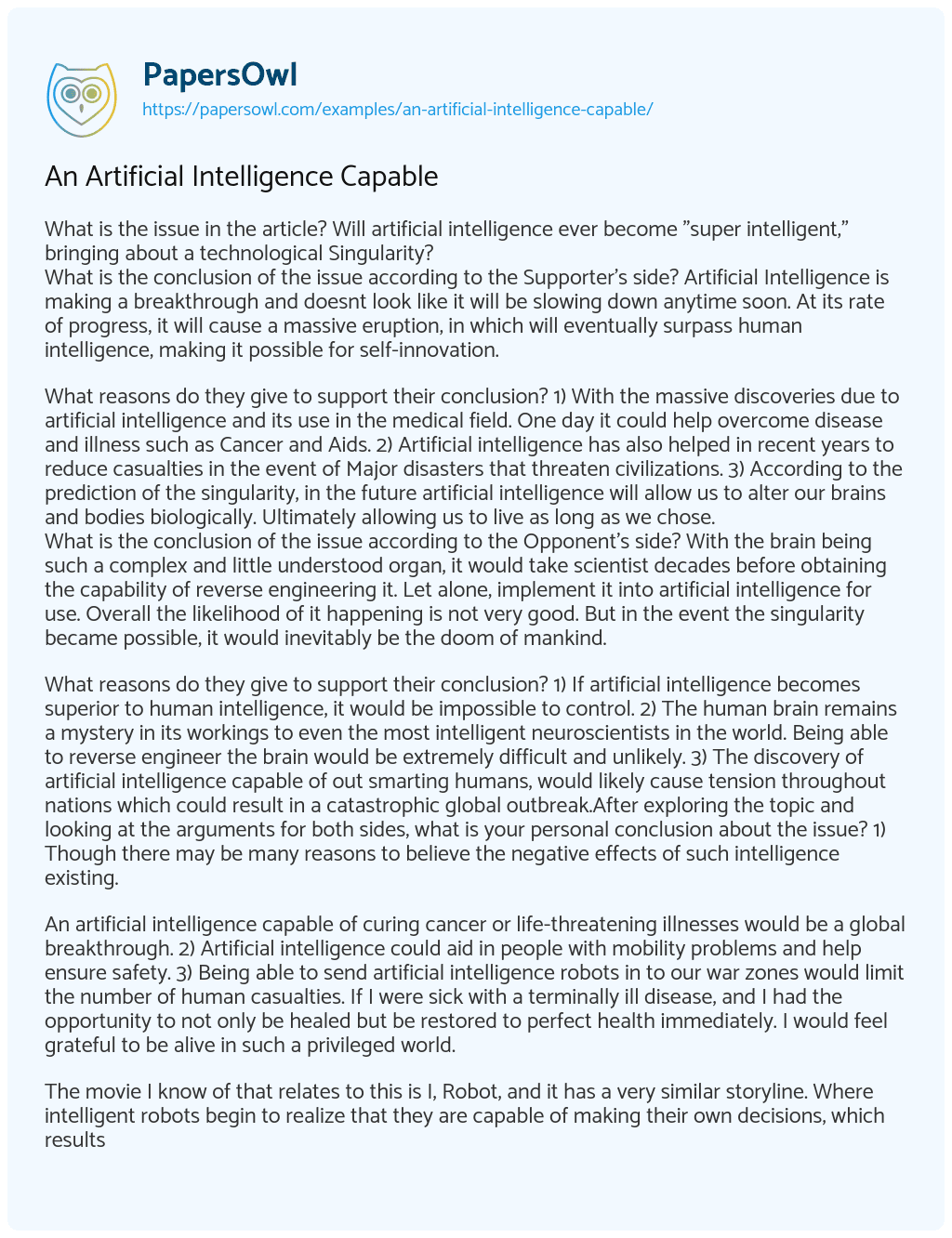 What is the issue in the article? Will artificial intelligence ever become “super intelligent,” bringing about a technological Singularity?
What is the conclusion of the issue according to the Supporter’s side? Artificial Intelligence is making a breakthrough and doesnt look like it will be slowing down anytime soon. At its rate of progress, it will cause a massive eruption, in which will eventually surpass human intelligence, making it possible for self-innovation.

What reasons do they give to support their conclusion? 1) With the massive discoveries due to artificial intelligence and its use in the medical field. One day it could help overcome disease and illness such as Cancer and Aids. 2) Artificial intelligence has also helped in recent years to reduce casualties in the event of Major disasters that threaten civilizations. 3) According to the prediction of the singularity, in the future artificial intelligence will allow us to alter our brains and bodies biologically. Ultimately allowing us to live as long as we chose.
What is the conclusion of the issue according to the Opponent’s side? With the brain being such a complex and little understood organ, it would take scientist decades before obtaining the capability of reverse engineering it. Let alone, implement it into artificial intelligence for use. Overall the likelihood of it happening is not very good. But in the event the singularity became possible, it would inevitably be the doom of mankind.

What reasons do they give to support their conclusion? 1) If artificial intelligence becomes superior to human intelligence, it would be impossible to control. 2) The human brain remains a mystery in its workings to even the most intelligent neuroscientists in the world. Being able to reverse engineer the brain would be extremely difficult and unlikely. 3) The discovery of artificial intelligence capable of out smarting humans, would likely cause tension throughout nations which could result in a catastrophic global outbreak.After exploring the topic and looking at the arguments for both sides, what is your personal conclusion about the issue? 1) Though there may be many reasons to believe the negative effects of such intelligence existing.

An artificial intelligence capable of curing cancer or life-threatening illnesses would be a global breakthrough. 2) Artificial intelligence could aid in people with mobility problems and help ensure safety. 3) Being able to send artificial intelligence robots in to our war zones would limit the number of human casualties. If I were sick with a terminally ill disease, and I had the opportunity to not only be healed but be restored to perfect health immediately. I would feel grateful to be alive in such a privileged world.

The movie I know of that relates to this is I, Robot, and it has a very similar storyline. Where intelligent robots begin to realize that they are capable of making their own decisions, which results in them turning against the human population in the attempt to eradicate them. I personally believe that humans should be the only ones capable of such intelligence, and the only other thing capable of creating it is of a higher power.