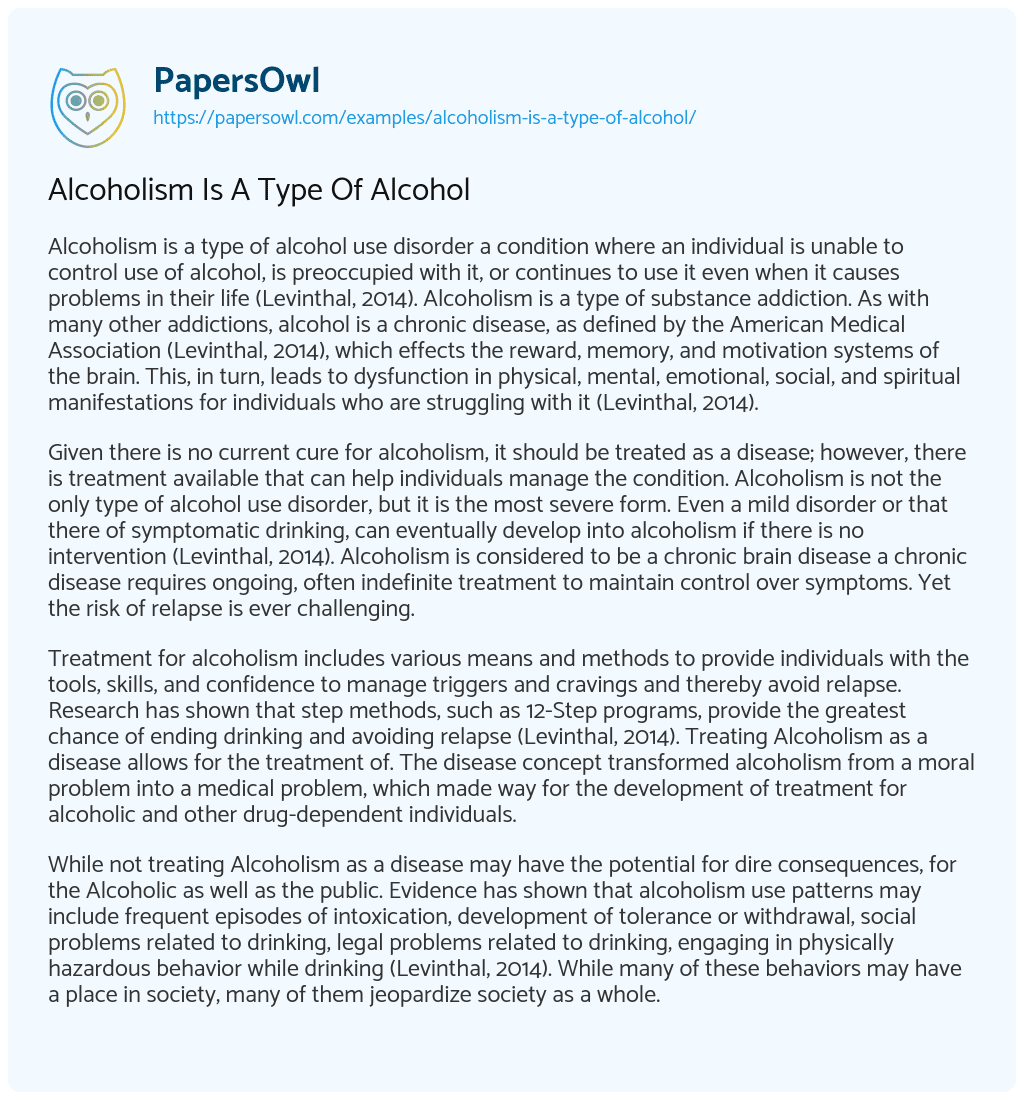 Alcoholism is a type of alcohol use disorder a condition where an individual is unable to control use of alcohol, is preoccupied with it, or continues to use it even when it causes problems in their life (Levinthal, 2014). Alcoholism is a type of substance addiction. As with many other addictions, alcohol is a chronic disease, as defined by the American Medical Association (Levinthal, 2014), which effects the reward, memory, and motivation systems of the brain. This, in turn, leads to dysfunction in physical, mental, emotional, social, and spiritual manifestations for individuals who are struggling with it (Levinthal, 2014).

Given there is no current cure for alcoholism, it should be treated as a disease; however, there is treatment available that can help individuals manage the condition. Alcoholism is not the only type of alcohol use disorder, but it is the most severe form. Even a mild disorder or that there of symptomatic drinking, can eventually develop into alcoholism if there is no intervention (Levinthal, 2014). Alcoholism is considered to be a chronic brain disease a chronic disease requires ongoing, often indefinite treatment to maintain control over symptoms. Yet the risk of relapse is ever challenging.

Treatment for alcoholism includes various means and methods to provide individuals with the tools, skills, and confidence to manage triggers and cravings and thereby avoid relapse. Research has shown that step methods, such as 12-Step programs, provide the greatest chance of ending drinking and avoiding relapse (Levinthal, 2014). Treating Alcoholism as a disease allows for the treatment of. The disease concept transformed alcoholism from a moral problem into a medical problem, which made way for the development of treatment for alcoholic and other drug-dependent individuals.

While not treating Alcoholism as a disease may have the potential for dire consequences, for the Alcoholic as well as the public. Evidence has shown that alcoholism use patterns may include frequent episodes of intoxication, development of tolerance or withdrawal, social problems related to drinking, legal problems related to drinking, engaging in physically hazardous behavior while drinking (Levinthal, 2014). While many of these behaviors may have a place in society, many of them jeopardize society as a whole.

Alcoholism Is A Type Of Alcohol. (2019, Jun 06). Retrieved from https://papersowl.com/examples/alcoholism-is-a-type-of-alcohol/

The Brain Mechanisms of Chronic Alcohol