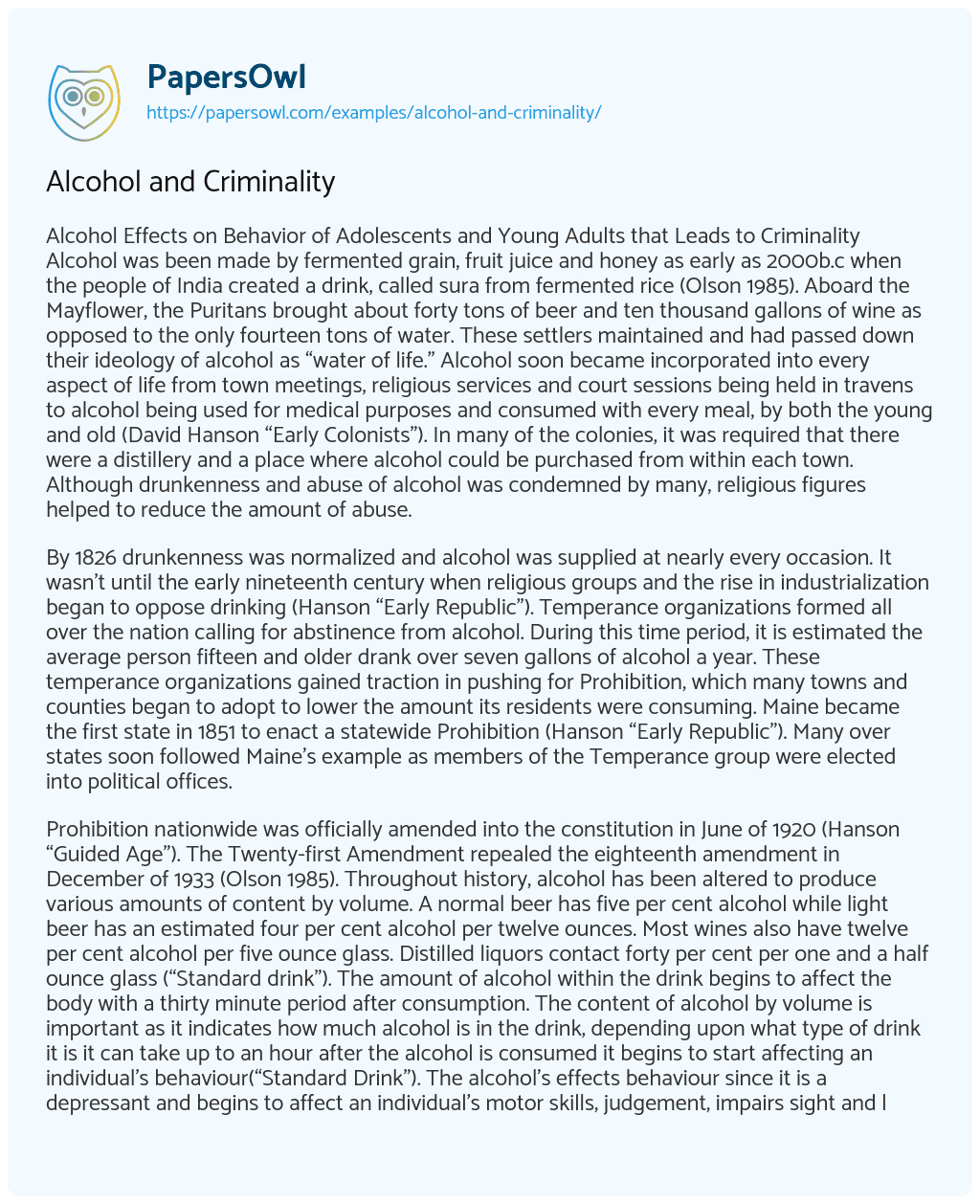 Alcohol Effects on Behavior of Adolescents and Young Adults that Leads to Criminality Alcohol was been made by fermented grain, fruit juice and honey as early as 2000b.c when the people of India created a drink, called sura from fermented rice (Olson 1985). Aboard the Mayflower, the Puritans brought about forty tons of beer and ten thousand gallons of wine as opposed to the only fourteen tons of water. These settlers maintained and had passed down their ideology of alcohol as “water of life.” Alcohol soon became incorporated into every aspect of life from town meetings, religious services and court sessions being held in travens to alcohol being used for medical purposes and consumed with every meal, by both the young and old (David Hanson “Early Colonists”). In many of the colonies, it was required that there were a distillery and a place where alcohol could be purchased from within each town. Although drunkenness and abuse of alcohol was condemned by many, religious figures helped to reduce the amount of abuse.

By 1826 drunkenness was normalized and alcohol was supplied at nearly every occasion. It wasn’t until the early nineteenth century when religious groups and the rise in industrialization began to oppose drinking (Hanson “Early Republic”). Temperance organizations formed all over the nation calling for abstinence from alcohol. During this time period, it is estimated the average person fifteen and older drank over seven gallons of alcohol a year. These temperance organizations gained traction in pushing for Prohibition, which many towns and counties began to adopt to lower the amount its residents were consuming. Maine became the first state in 1851 to enact a statewide Prohibition (Hanson “Early Republic”). Many over states soon followed Maine’s example as members of the Temperance group were elected into political offices.

Prohibition nationwide was officially amended into the constitution in June of 1920 (Hanson “Guided Age”). The Twenty-first Amendment repealed the eighteenth amendment in December of 1933 (Olson 1985). Throughout history, alcohol has been altered to produce various amounts of content by volume. A normal beer has five per cent alcohol while light beer has an estimated four per cent alcohol per twelve ounces. Most wines also have twelve per cent alcohol per five ounce glass. Distilled liquors contact forty per cent per one and a half ounce glass (“Standard drink”). The amount of alcohol within the drink begins to affect the body with a thirty minute period after consumption. The content of alcohol by volume is important as it indicates how much alcohol is in the drink, depending upon what type of drink it is it can take up to an hour after the alcohol is consumed it begins to start affecting an individual’s behaviour(“Standard Drink”). The alcohol’s effects behaviour since it is a depressant and begins to affect an individual’s motor skills, judgement, impairs sight and lowers inhibitions (Yochelson, 1976).

As the initial effects of consumption such as joy, talkativeness and courage take over the inhibitory action of the alcohol begin to take effect on the nervous system (Benincasa 2018). The alcohol mimics an anaesthetic inside the body allowing the consumer to feel relaxed and at ease. As the alcohol begins to affect the body it indirectly begins to the limbic system, which is responsible for emotional expression and the activity of reward in the brain (Benincasa 2018). These effects can have severe consequences for anyone, especially adolescents and young adults. A survey conducted in 2010 found that alcohol is the most consumed substance amongst adolescents starting at the age of thirteen (Benincasa 2018). Adolescents, they report drinking or binge drinking at least once in a thirty day period (Ramseyer, 2017). Most adolescents gain access to alcohol through their family members or peers and find reasons to continue drinking such as social acceptance, the situation they are in or to avoid negative emotions. The alcohol dependence amongst the adolescent population continues into adulthood (Benincasa 2018).

The pattern of alcohol use during adolescence continues into adulthood. Gann (2012) found among college students in the US consumption has been found to be a significant issue as eighty per cent of students have reported drinking and forty per cent report they binge drink. Ramseyer (2017) found that alcohol has created a negative perception of self, which may contribute to continued use. Alcohol abuse not only affects the individual who consumes it but can have negative effects on the environment and society as well.

Aggressive behaviour and alcohol consumption have been well documented in literature since the colonies had been established (Borders 2007). Although alcohol has contributed to numerous threats, assaults and homicides there have been studies that show the results of alcohol and aggression are inconsistent. This is primarily due to the fact that not everyone who consumes alcohol becomes aggressive. Borders (2007) has shown the link between alcohol and aggression are caused by individually held expectancies of alcohol and learned beliefs regarding its effects. Borders found that heavy consumption had lead to higher expectations for aggressive behaviours and acts as well as feelings of hostility in the drinker (2007).

Alcohol and Criminality. (2019, May 24). Retrieved from https://papersowl.com/examples/alcohol-and-criminality/

Alcohol and Aggression in Adults