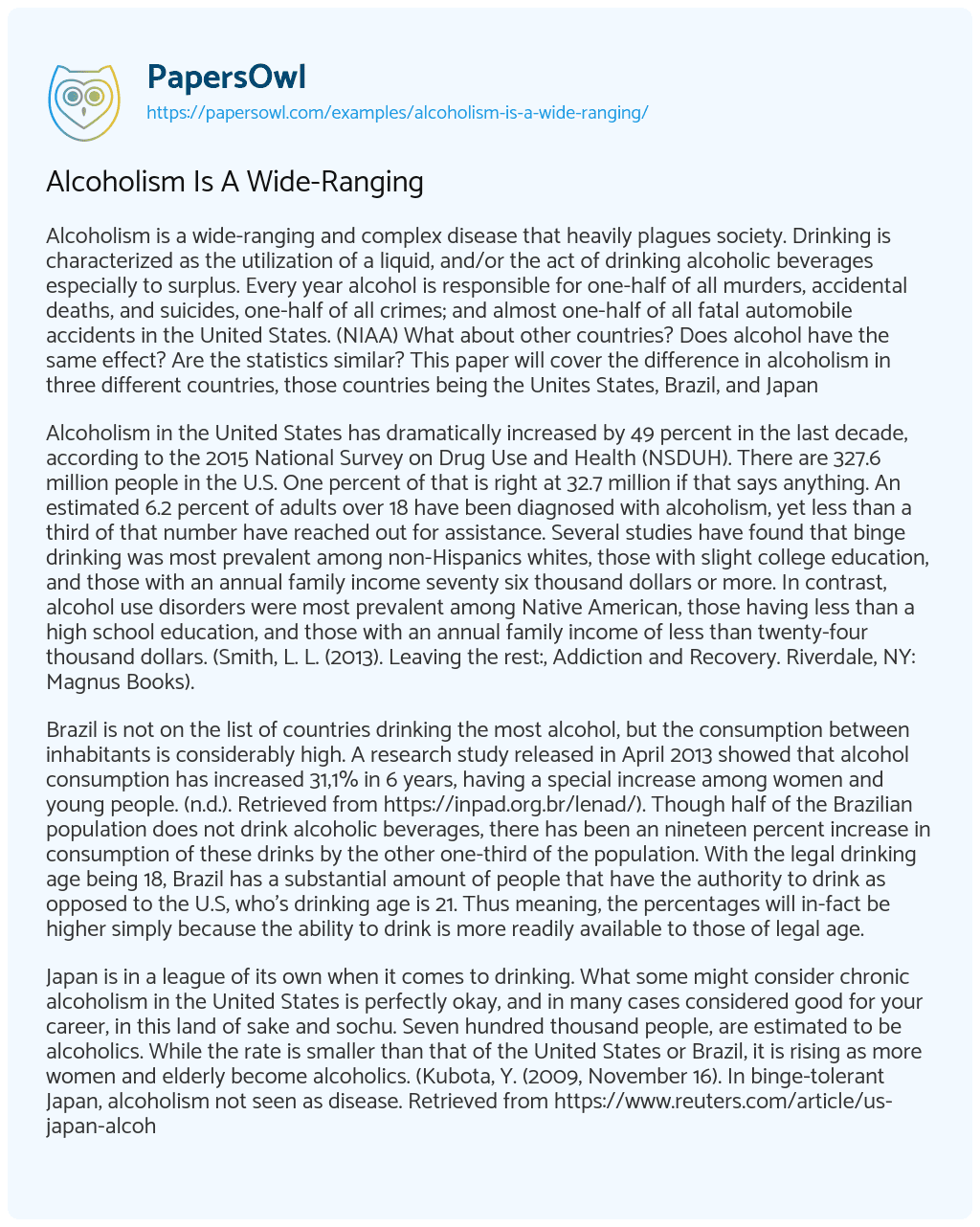 Alcoholism is a wide-ranging and complex disease that heavily plagues society. Drinking is characterized as the utilization of a liquid, and/or the act of drinking alcoholic beverages especially to surplus. Every year alcohol is responsible for one-half of all murders, accidental deaths, and suicides, one-half of all crimes; and almost one-half of all fatal automobile accidents in the United States. (NIAA) What about other countries? Does alcohol have the same effect? Are the statistics similar? This paper will cover the difference in alcoholism in three different countries, those countries being the Unites States, Brazil, and Japan

Alcoholism in the United States has dramatically increased by 49 percent in the last decade, according to the 2015 National Survey on Drug Use and Health (NSDUH). There are 327.6 million people in the U.S. One percent of that is right at 32.7 million if that says anything. An estimated 6.2 percent of adults over 18 have been diagnosed with alcoholism, yet less than a third of that number have reached out for assistance. Several studies have found that binge drinking was most prevalent among non-Hispanics whites, those with slight college education, and those with an annual family income seventy six thousand dollars or more. In contrast, alcohol use disorders were most prevalent among Native American, those having less than a high school education, and those with an annual family income of less than twenty-four thousand dollars. (Smith, L. L. (2013). Leaving the rest:, Addiction and Recovery. Riverdale, NY: Magnus Books).

Brazil is not on the list of countries drinking the most alcohol, but the consumption between inhabitants is considerably high. A research study released in April 2013 showed that alcohol consumption has increased 31,1% in 6 years, having a special increase among women and young people. (n.d.). Retrieved from https://inpad.org.br/lenad/). Though half of the Brazilian population does not drink alcoholic beverages, there has been an nineteen percent increase in consumption of these drinks by the other one-third of the population. With the legal drinking age being 18, Brazil has a substantial amount of people that have the authority to drink as opposed to the U.S, who’s drinking age is 21. Thus meaning, the percentages will in-fact be higher simply because the ability to drink is more readily available to those of legal age.

Japan is in a league of its own when it comes to drinking. What some might consider chronic alcoholism in the United States is perfectly okay, and in many cases considered good for your career, in this land of sake and sochu. Seven hundred thousand people, are estimated to be alcoholics. While the rate is smaller than that of the United States or Brazil, it is rising as more women and elderly become alcoholics. (Kubota, Y. (2009, November 16). In binge-tolerant Japan, alcoholism not seen as disease. Retrieved from https://www.reuters.com/article/us-japan-alcohol/in-binge-tolerant-japan-alcoholism-not-seen-as-disease-idUSTRE5AF0OO20091116)

Alcohol is not a traditional commodity. While it carries connotations of pleasure and sociability in the minds of many, harmful consequences of its use are diverse and widespread. In this paper, alcoholism in multiple countries were studied and discussed. Those countries being the United States, Brazil, and Japan. National monitoring systems need to be developed to keep track of alcohol consumption and its consequences, and to raise awareness amongst the public and policy-makers. It is up to both governments and concerned citizens to encourage debate and formulate effective public health policies that minimize the harm caused by alcohol.

Alcoholism Is A Wide-Ranging. (2020, Feb 20). Retrieved from https://papersowl.com/examples/alcoholism-is-a-wide-ranging/