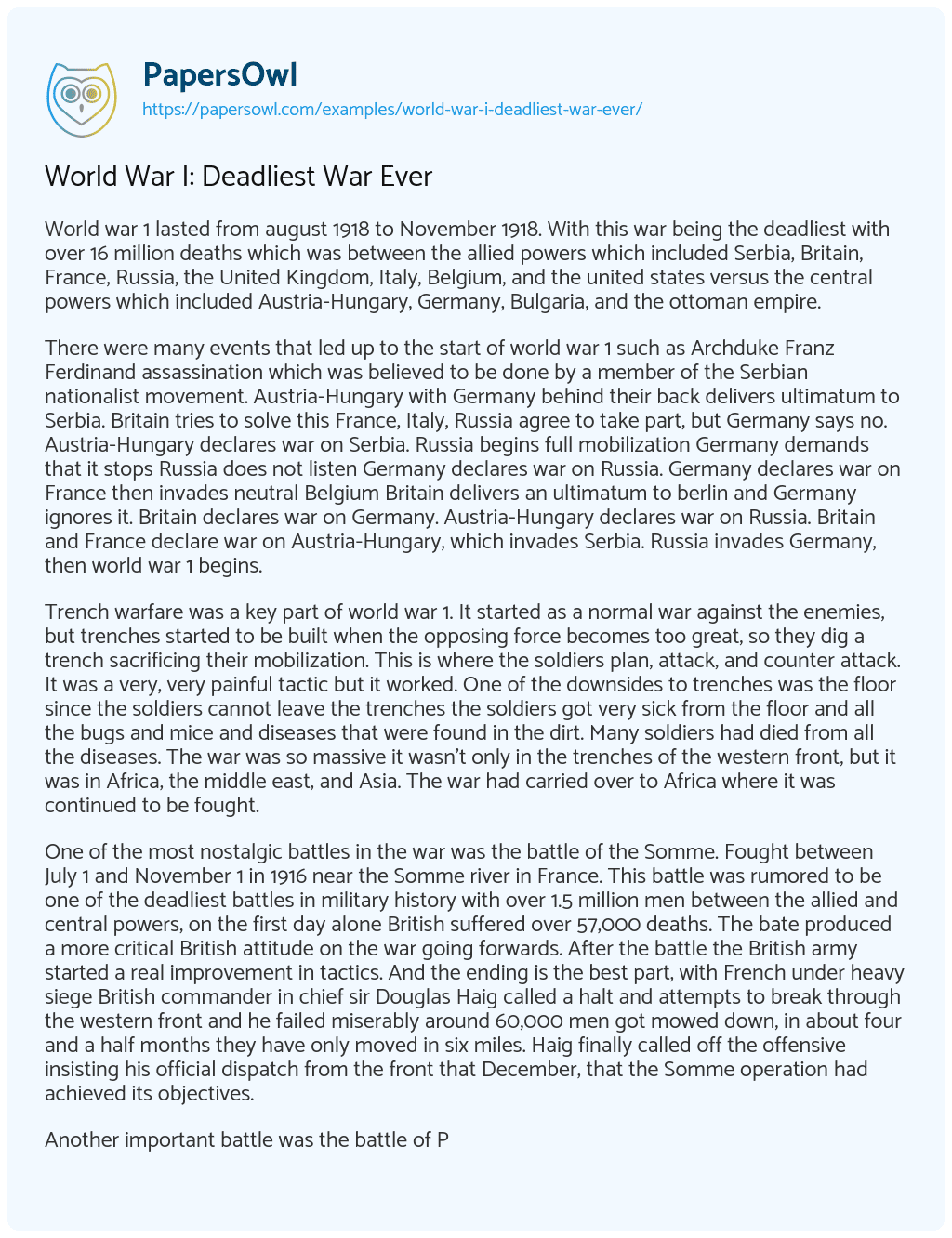 World war 1 lasted from august 1918 to November 1918. With this war being the deadliest with over 16 million deaths which was between the allied powers which included Serbia, Britain, France, Russia, the United Kingdom, Italy, Belgium, and the united states versus the central powers which included Austria-Hungary, Germany, Bulgaria, and the ottoman empire.

Trench warfare was a key part of world war 1. It started as a normal war against the enemies, but trenches started to be built when the opposing force becomes too great, so they dig a trench sacrificing their mobilization. This is where the soldiers plan, attack, and counter attack. It was a very, very painful tactic but it worked. One of the downsides to trenches was the floor since the soldiers cannot leave the trenches the soldiers got very sick from the floor and all the bugs and mice and diseases that were found in the dirt. Many soldiers had died from all the diseases. The war was so massive it wasn’t only in the trenches of the western front, but it was in Africa, the middle east, and Asia. The war had carried over to Africa where it was continued to be fought.

One of the most nostalgic battles in the war was the battle of the Somme. Fought between July 1 and November 1 in 1916 near the Somme river in France. This battle was rumored to be one of the deadliest battles in military history with over 1.5 million men between the allied and central powers, on the first day alone British suffered over 57,000 deaths. The bate produced a more critical British attitude on the war going forwards. After the battle the British army started a real improvement in tactics. And the ending is the best part, with French under heavy siege British commander in chief sir Douglas Haig called a halt and attempts to break through the western front and he failed miserably around 60,000 men got mowed down, in about four and a half months they have only moved in six miles. Haig finally called off the offensive insisting his official dispatch from the front that December, that the Somme operation had achieved its objectives.

Another important battle was the battle of Passchendaele which took place between July and November 1917 this battle along with Somme was home to many, many deaths it was fought in heavy fields and it just so happened to be raining season, so we weren’t just fighting the Germans but also mud which sunk men, horses, tanks, and weapons. After about three and a half months of brutal trench warfare the allies had finally captured back the village of Passchendaele. However, three major battles ended up giving the British an upper hand. The names of these battles were the battle of Menin road ridge (which took five days from September 20 to September 25, 1917) the battle of polygon wood (which took surprisingly only one day from September 26 to September 27, 1917) the battle of Broodseinde (which was started and finished on October 4, 1917) what all these battles did was help the allies regain possession of the ridge east of Ypres. Little process was made in October which led Haig to call for help from the Canadians and Canada agreed to help. On November 6 the British and Canadians had finally captured what was left of Passchendaele, leading Haig to call off the offensive and claim victory.

At the start of 1918 the Americans had come into the war and the Russians had pulled out. And the central powers were running critically low on food, ammo, supplies. But the soldiers had remained strong for hope of the victory in the war, but the Germans knew they couldn’t go much longer in the war. And on November 11, 1918 the Germans had signed an armistice and agreed to stop fighting and just a little later signed the treaty of Versailles which ultimately led to the allies’ victory and we had won world war one. Life after the war wasn’t easy after all it was one of the deadliest wars at that time with over 17 million deaths. And that’s what world war one is.

World War I: Deadliest War Ever. (2019, Nov 27). Retrieved from https://papersowl.com/examples/world-war-i-deadliest-war-ever/