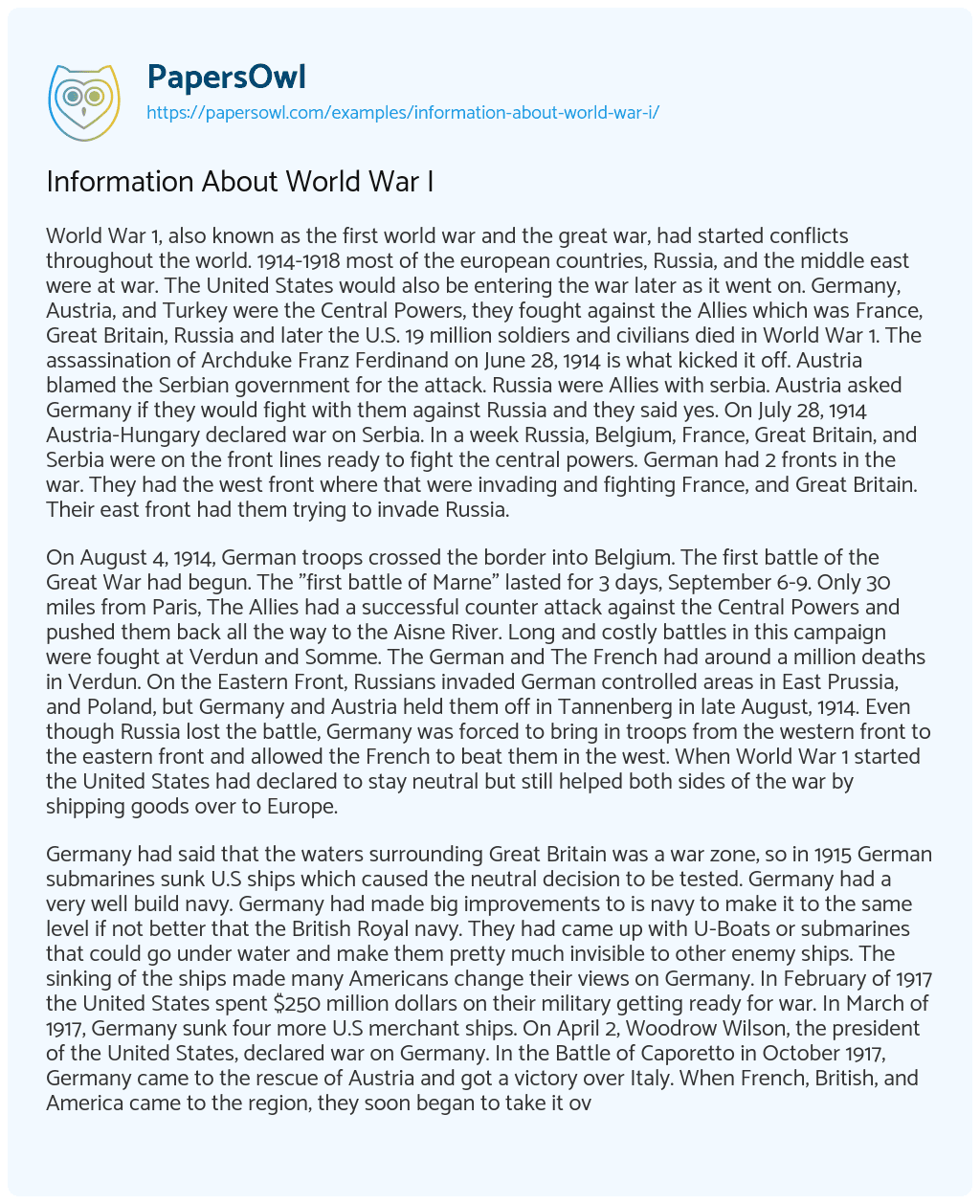 World War 1, also known as the first world war and the great war, had started conflicts throughout the world. 1914-1918 most of the european countries, Russia, and the middle east were at war. The United States would also be entering the war later as it went on. Germany, Austria, and Turkey were the Central Powers, they fought against the Allies which was France, Great Britain, Russia and later the U.S. 19 million soldiers and civilians died in World War 1. The assassination of Archduke Franz Ferdinand on June 28, 1914 is what kicked it off. Austria blamed the Serbian government for the attack. Russia were Allies with serbia. Austria asked Germany if they would fight with them against Russia and they said yes. On July 28, 1914 Austria-Hungary declared war on Serbia. In a week Russia, Belgium, France, Great Britain, and Serbia were on the front lines ready to fight the central powers. German had 2 fronts in the war. They had the west front where that were invading and fighting France, and Great Britain. Their east front had them trying to invade Russia.

On August 4, 1914, German troops crossed the border into Belgium. The first battle of the Great War had begun. The “first battle of Marne” lasted for 3 days, September 6-9. Only 30 miles from Paris, The Allies had a successful counter attack against the Central Powers and pushed them back all the way to the Aisne River. Long and costly battles in this campaign were fought at Verdun and Somme. The German and The French had around a million deaths in Verdun. On the Eastern Front, Russians invaded German controlled areas in East Prussia, and Poland, but Germany and Austria held them off in Tannenberg in late August, 1914. Even though Russia lost the battle, Germany was forced to bring in troops from the western front to the eastern front and allowed the French to beat them in the west. When World War 1 started the United States had declared to stay neutral but still helped both sides of the war by shipping goods over to Europe.

Germany had said that the waters surrounding Great Britain was a war zone, so in 1915 German submarines sunk U.S ships which caused the neutral decision to be tested. Germany had a very well build navy. Germany had made big improvements to is navy to make it to the same level if not better that the British Royal navy. They had came up with U-Boats or submarines that could go under water and make them pretty much invisible to other enemy ships. The sinking of the ships made many Americans change their views on Germany. In February of 1917 the United States spent $250 million dollars on their military getting ready for war. In March of 1917, Germany sunk four more U.S merchant ships. On April 2, Woodrow Wilson, the president of the United States, declared war on Germany. In the Battle of Caporetto in October 1917, Germany came to the rescue of Austria and got a victory over Italy. When French, British, and America came to the region, they soon began to take it over. Germany and Russia decided to stop fighting each other so Germany was able to put heavy resistance on the French and British in the second battle of the Marne, but the U.S gave them some assistance.

On July 15,1918 that would be the day Germany would go at their last try at trying to get hold of the war. With the French, British, and 85,000 U.S troops the Allies were able to hold them off. The Germans had lost so many men, that they had to fall back out of the plan to go up north to have any sight of victory. The Allies would soon take back most of europe in the following months. Toward the fall of 1918, the Central Powers were crippling and had no hope in sight. The fighting had stopped on November 4 1918. Just a week later on November 4 1918, Germany had finally signed and peace treaty to stop the war. World War 1 was over. Over 9 million people died, 21 million were injured, and 10 million civilians died due to the cause of World War 1. Germany and France were the most affected countries in this war. Later after the war, people called it the war to end all war, but Germany had so much hatred from the loss of world war one. People did not realize that till after something much worse would soon follow called World War 2

Information About World War I. (2019, Sep 07). Retrieved from https://papersowl.com/examples/information-about-world-war-i/