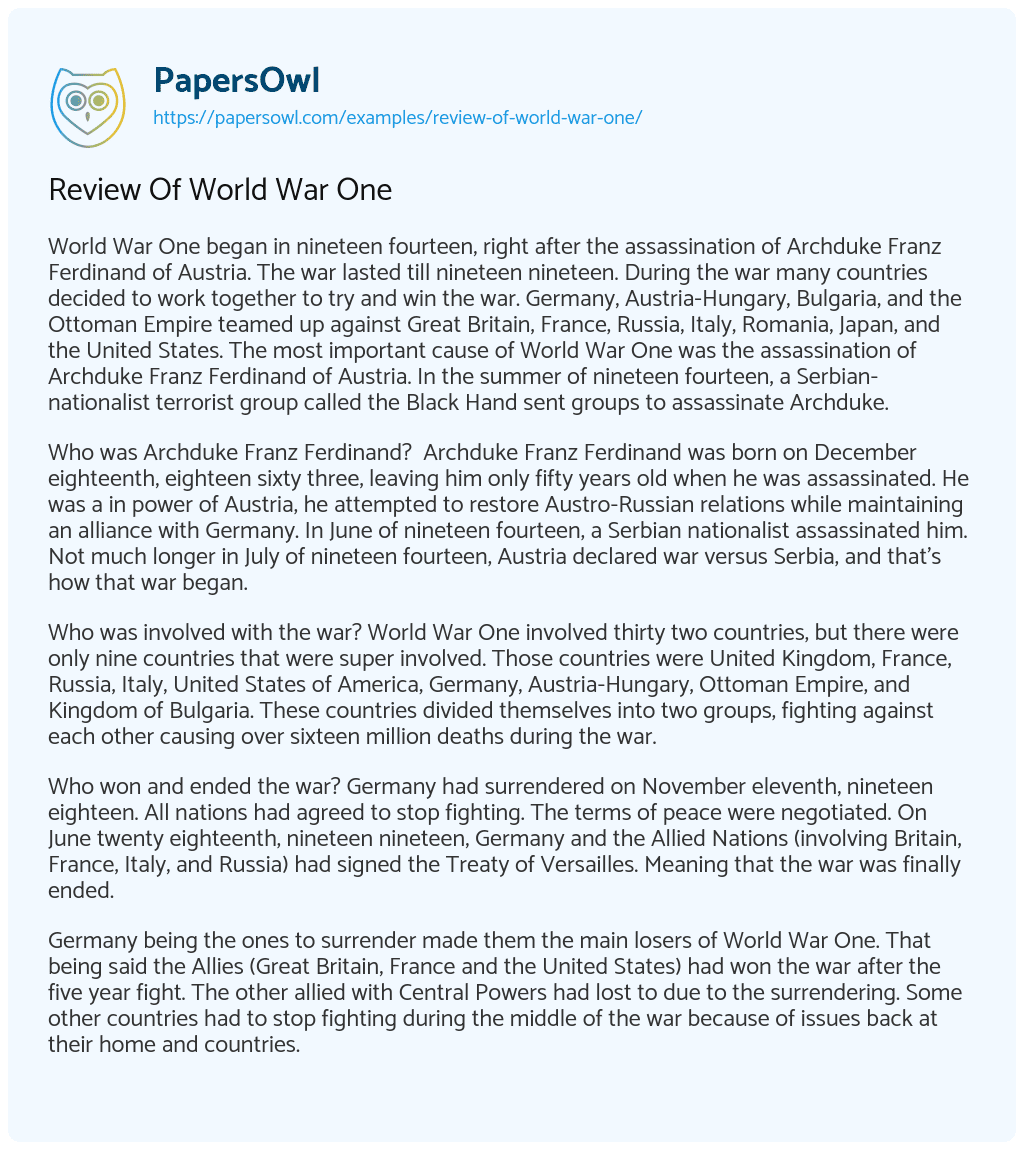 World War One began in nineteen fourteen, right after the assassination of Archduke Franz Ferdinand of Austria. The war lasted till nineteen nineteen. During the war many countries decided to work together to try and win the war. Germany, Austria-Hungary, Bulgaria, and the Ottoman Empire teamed up against Great Britain, France, Russia, Italy, Romania, Japan, and the United States. The most important cause of World War One was the assassination of Archduke Franz Ferdinand of Austria. In the summer of nineteen fourteen, a Serbian-nationalist terrorist group called the Black Hand sent groups to assassinate Archduke.

Who was Archduke Franz Ferdinand?  Archduke Franz Ferdinand was born on December eighteenth, eighteen sixty three, leaving him only fifty years old when he was assassinated. He was a in power of Austria, he attempted to restore Austro-Russian relations while maintaining an alliance with Germany. In June of nineteen fourteen, a Serbian nationalist assassinated him. Not much longer in July of nineteen fourteen, Austria declared war versus Serbia, and that’s how that war began.

Who was involved with the war? World War One involved thirty two countries, but there were only nine countries that were super involved. Those countries were United Kingdom, France, Russia, Italy, United States of America, Germany, Austria-Hungary, Ottoman Empire, and Kingdom of Bulgaria. These countries divided themselves into two groups, fighting against each other causing over sixteen million deaths during the war.

Who won and ended the war? Germany had surrendered on November eleventh, nineteen eighteen. All nations had agreed to stop fighting. The terms of peace were negotiated. On June twenty eighteenth, nineteen nineteen, Germany and the Allied Nations (involving Britain, France, Italy, and Russia) had signed the Treaty of Versailles. Meaning that the war was finally ended.

Germany being the ones to surrender made them the main losers of World War One. That being said the Allies (Great Britain, France and the United States) had won the war after the five year fight. The other allied with Central Powers had lost to due to the surrendering. Some other countries had to stop fighting during the middle of the war because of issues back at their home and countries.

Review Of World War One. (2019, Jun 16). Retrieved from https://papersowl.com/examples/review-of-world-war-one/