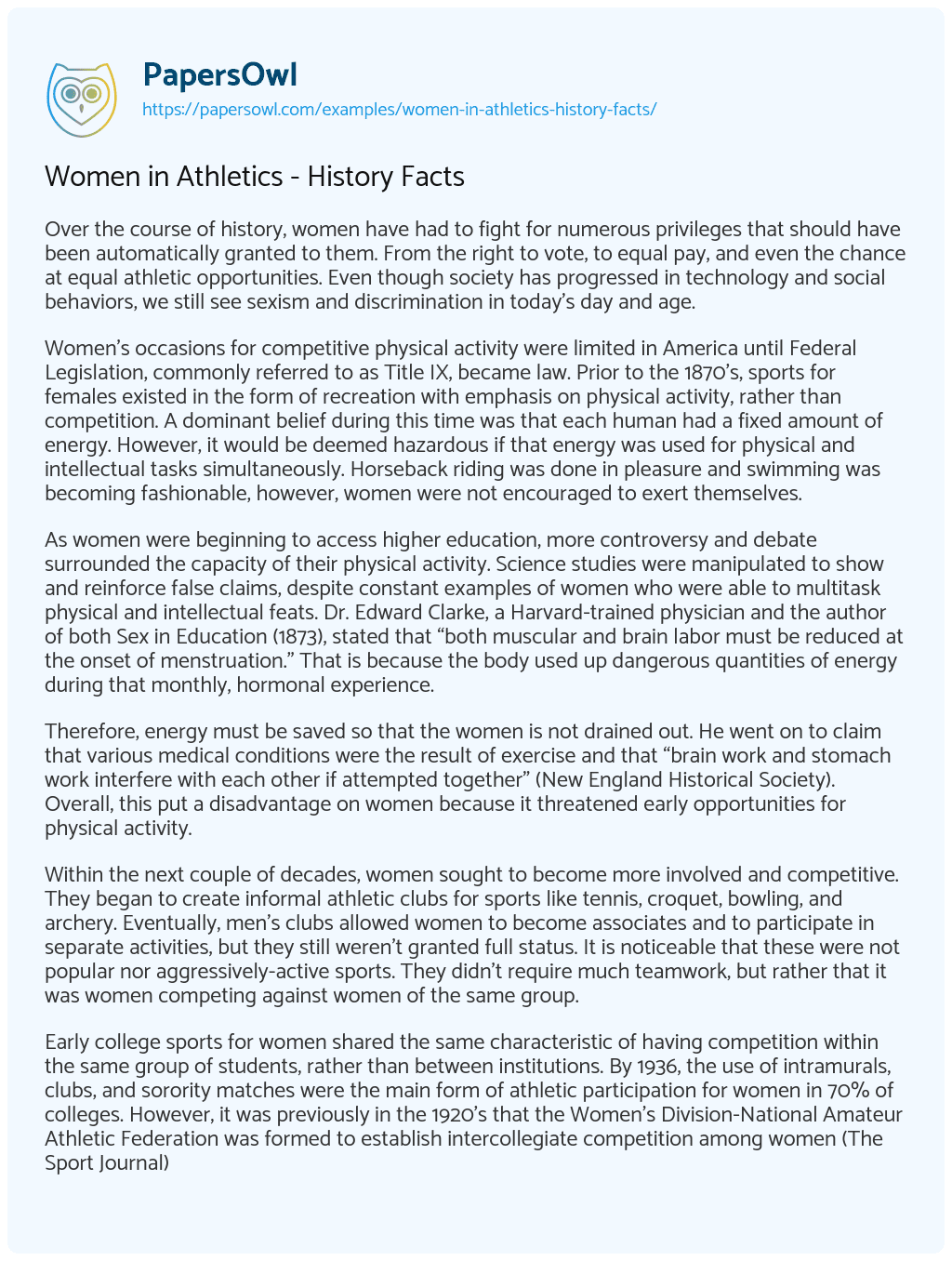 Over the course of history, women have had to fight for numerous privileges that should have been automatically granted to them. From the right to vote, to equal pay, and even the chance at equal athletic opportunities. Even though society has progressed in technology and social behaviors, we still see sexism and discrimination in today’s day and age.

Women’s occasions for competitive physical activity were limited in America until Federal Legislation, commonly referred to as Title IX, became law. Prior to the 1870’s, sports for females existed in the form of recreation with emphasis on physical activity, rather than competition. A dominant belief during this time was that each human had a fixed amount of energy. However, it would be deemed hazardous if that energy was used for physical and intellectual tasks simultaneously. Horseback riding was done in pleasure and swimming was becoming fashionable, however, women were not encouraged to exert themselves.

As women were beginning to access higher education, more controversy and debate surrounded the capacity of their physical activity. Science studies were manipulated to show and reinforce false claims, despite constant examples of women who were able to multitask physical and intellectual feats. Dr. Edward Clarke, a Harvard-trained physician and the author of both Sex in Education (1873), stated that “both muscular and brain labor must be reduced at the onset of menstruation.” That is because the body used up dangerous quantities of energy during that monthly, hormonal experience.

Therefore, energy must be saved so that the women is not drained out. He went on to claim that various medical conditions were the result of exercise and that “brain work and stomach work interfere with each other if attempted together” (New England Historical Society). Overall, this put a disadvantage on women because it threatened early opportunities for physical activity.

Within the next couple of decades, women sought to become more involved and competitive. They began to create informal athletic clubs for sports like tennis, croquet, bowling, and archery. Eventually, men’s clubs allowed women to become associates and to participate in separate activities, but they still weren’t granted full status. It is noticeable that these were not popular nor aggressively-active sports. They didn’t require much teamwork, but rather that it was women competing against women of the same group.

Early college sports for women shared the same characteristic of having competition within the same group of students, rather than between institutions. By 1936, the use of intramurals, clubs, and sorority matches were the main form of athletic participation for women in 70% of colleges. However, it was previously in the 1920’s that the Women’s Division-National Amateur Athletic Federation was formed to establish intercollegiate competition among women (The Sport Journal). Considering the problems and criticism surrounding men’s intercollegiate sports, they were determined to keep women’s athletics a safe and educational environment.

The passage of the nineteenth amendment in 1920, that granted women the right to vote, had a large impact on the renewed emphasis on their freedoms. However, the gains for female competitive sports from feminist movements were negated by the depression in the 1930’s. It left millions of Americans out of work and reinforced the idea that women should be kept in their place at home. A decade later, war brought millions of men into the military which left job openings at the homefront. Women took the opportunity to leave their homes to fill the void and earned the iconic representation of “Rosie the Riveter.”

Women during World War II worked in a variety of positions previously closed to them, such as within the aviation industry. By showing that they were equal to the task, it pushed the movement for women’s equal rights. It was believed that if they could prove themselves successful in the workforce, then they would be taken more seriously when competing athletically. World War II also saw the arrival of the first woman’s professional athletic team, the All-American Girls Baseball League of 1943. As the war ended, women’s sport organizations began to increase, and intercollegiate competition spread.

In the 1950s and 1960s, social attitudes towards female involvement was changing. The passage of the Civil Rights Act of 1964 helped increase the status of both women and minorities. The debate for equal rights was prominent during this time and set the path for the future. By 1960, over 20 percent of Olympic Winter Game participants were female (Olympics). It was where women’s speed skating made its Olympic debut, which was held in Squaw Valley, California. Females also participated in sports such as cross-country skiing, figure skating, and alpine skiing.