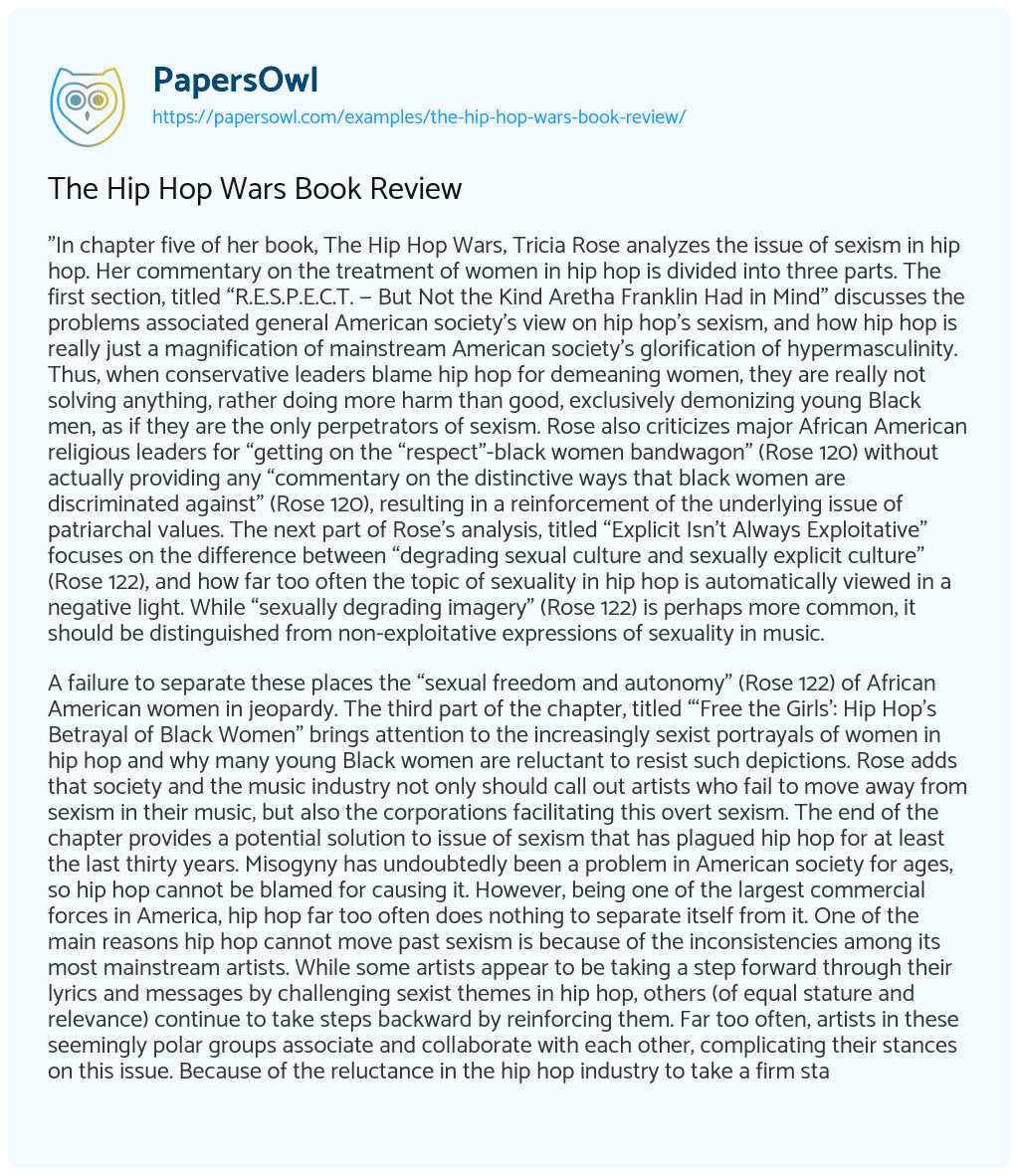 “In chapter five of her book, The Hip Hop Wars, Tricia Rose analyzes the issue of sexism in hip hop. Her commentary on the treatment of women in hip hop is divided into three parts. The first section, titled “R.E.S.P.E.C.T. — But Not the Kind Aretha Franklin Had in Mind” discusses the problems associated general American society’s view on hip hop’s sexism, and how hip hop is really just a magnification of mainstream American society’s glorification of hypermasculinity. Thus, when conservative leaders blame hip hop for demeaning women, they are really not solving anything, rather doing more harm than good, exclusively demonizing young Black men, as if they are the only perpetrators of sexism. Rose also criticizes major African American religious leaders for “getting on the “respect”-black women bandwagon” (Rose 120) without actually providing any “commentary on the distinctive ways that black women are discriminated against” (Rose 120), resulting in a reinforcement of the underlying issue of patriarchal values. The next part of Rose’s analysis, titled “Explicit Isn’t Always Exploitative” focuses on the difference between “degrading sexual culture and sexually explicit culture” (Rose 122), and how far too often the topic of sexuality in hip hop is automatically viewed in a negative light. While “sexually degrading imagery” (Rose 122) is perhaps more common, it should be distinguished from non-exploitative expressions of sexuality in music.

A failure to separate these places the “sexual freedom and autonomy” (Rose 122) of African American women in jeopardy. The third part of the chapter, titled “‘Free the Girls’: Hip Hop’s Betrayal of Black Women” brings attention to the increasingly sexist portrayals of women in hip hop and why many young Black women are reluctant to resist such depictions. Rose adds that society and the music industry not only should call out artists who fail to move away from sexism in their music, but also the corporations facilitating this overt sexism. The end of the chapter provides a potential solution to issue of sexism that has plagued hip hop for at least the last thirty years. Misogyny has undoubtedly been a problem in American society for ages, so hip hop cannot be blamed for causing it. However, being one of the largest commercial forces in America, hip hop far too often does nothing to separate itself from it. One of the main reasons hip hop cannot move past sexism is because of the inconsistencies among its most mainstream artists. While some artists appear to be taking a step forward through their lyrics and messages by challenging sexist themes in hip hop, others (of equal stature and relevance) continue to take steps backward by reinforcing them. Far too often, artists in these seemingly polar groups associate and collaborate with each other, complicating their stances on this issue. Because of the reluctance in the hip hop industry to take a firm stance against sexism, progress to fight it has never been made, and many of the criticisms and analyses made by Rose continue to maintain their relevance today.

Near the beginning of the chapter, Rose uses a quote from George Bush to demonstrate the issues with the conservative approach to sexism. Rose summarizes Bush’s quote as a claim “that gang-invested kids are operating outside the bounds of acceptable male American culture that ‘respects’ women” (Rose 118). With the rise of gangsta rap in the late 1980s into the 90s, there is no shortage of songs to choose from to both demonstrate and contradict Bush’s ideas. One of the figureheads of this style was Tupac Shakur. While he was raised in a culture of political activism and education, Shakur made it clear that he was still very involved in the street life, which likely meant association with some type of gang activity. Tupac’s music ranged from loud expressions of the typical gangster life to songs like “Keep Ya Head Up”, released in 1993, which reflected his educational upbringing. “Keep Ya Head Up” speaks out against the betrayal of Black women (an situation that Tricia Rose writes on) with lines encouraging Black women to stand up to the oppressive circumstances they face in everyday life. He warns of the consequence of a failure to uplift women by challenging sexism as a future with “a race of babies that hate the ladies that make the babies”, insisting that if no action is taken to combat misogyny in society, the problem would only get worse than it already was.

When heard in isolation, this song would allow any listener to conclude Tupac’s undivided support for feminist ideals, contradicting George Bush’s implication that “hip hop and young black men represent the decline of civility, honor, and good manhood” (Rose 118). In Tupac’s case, a young Black man involved in the street life was seemingly able to wholeheartedly express his agreement with feminist values. However, Shakur did not always represent the message of “Keep Ya Head Up”. Shortly after the release of “Keep Ya Head Up”, Shakur was accused and convicted of rape, although he earnestly denied it. Even if listeners were to give him the benefit of the doubt regarding his criminal charges, it is difficult to rationalize his derogatory language towards women in many of his songs. Between his songs over the years, listeners can easily see the seemingly polar opposite values Tupac seems to communicate through his lyrics. Labeling Tupac Shakur as a true opposer of misogyny in hip hop and American society would be inaccurate. Although at times he appeared to be on the right track, his words often proved to be inconsistent on the issue of sexism.

One might argue that although Tupac had a skewed understanding of sexism, he is remembered more for his positive lyrics about women than the negative ones. The same cannot be said about the artists he associated with. Under Death Row Records, he frequently collaborated with artists like Dr. Dre and Snoop Dogg, who released the song “Bitches Ain’t Shit” in 1992. Tricia Rose comments on the distinction between sexually explicit and sexually exploitative lyrics, and lines like “lick on these nuts and suck the dick, gets the fuck out after you’re done”, make this song is a clear example of the latter. Rose included a quote from one of her students, on how she didn’t “even listen to contemporary hip hop anymore” and how her “collection ends… about ten years ago” (Rose 125), which suggests that the sexism in hip hop started more recently, but evidently it had been an issue for longer, because this is one of many songs from the gangsta rap era with these kinds of exploitative lyrics. Dr. Dre and Snoop Dogg’s display of unapologetic misogyny is problematic in itself, but just as troubling is Tupac’s association with these artists. Rose summarizes the issue, writing: “to continue to make general statements against [hip hop’s] sexism but then show public love and support for artists who are unrepentant… is to support their sexism and encourage others to do the same” (Rose 129). Tupac might have made some music that aimed to uplift Black women, but his association with artists who did the opposite ultimately negated his efforts.

Tupac, Snoop Dogg, and Dr. Dre’s reign over hip hop may be far in the past, but problematic lyrics and relationships between artists is just as relevant today. Dominique Jones, better known by his stage name Lil Baby, experienced a rapid rise to popularity in recent years, topping charts alongside the most established names in hip hop. Like Tupac, Jones is no stranger to the streets, often describing his difficult life before fame through his lyrics. George Bush’s assumption is again proven false when Jones, on his 2018 track “Never Recover”, makes a quick but firm statement regarding consent when he raps, “if she tell me ‘No’ once, I won’t even touch it”. This is not the first time Lil Baby’s lyrics emphasize consensual sexual activity, but on this song in particular he is alongside arguably the biggest name in hip hop at the moment, Drake. The fact that Drake was featured drew many listeners in that might not have otherwise heard this song, and Lil Baby undoubtedly knew this would happen before the it released. Perhaps he saw the opportunity to encourage a shift in the attitude of hip hop artists towards women and chose to take it.

Unfortunately, much like Tupac, Lil Baby’s lyrics anti-sexual assault message is contradicted by his associations with other artists. “Never Recover” is a song on Lil Baby and Gunna’s collaborative project, Drip Harder, which opens with a track called “Off White VLONE”, featuring prominent artists NAV and Lil Durk.”

About Changes by Tupac Shakur

About Sexism in the Music Industry