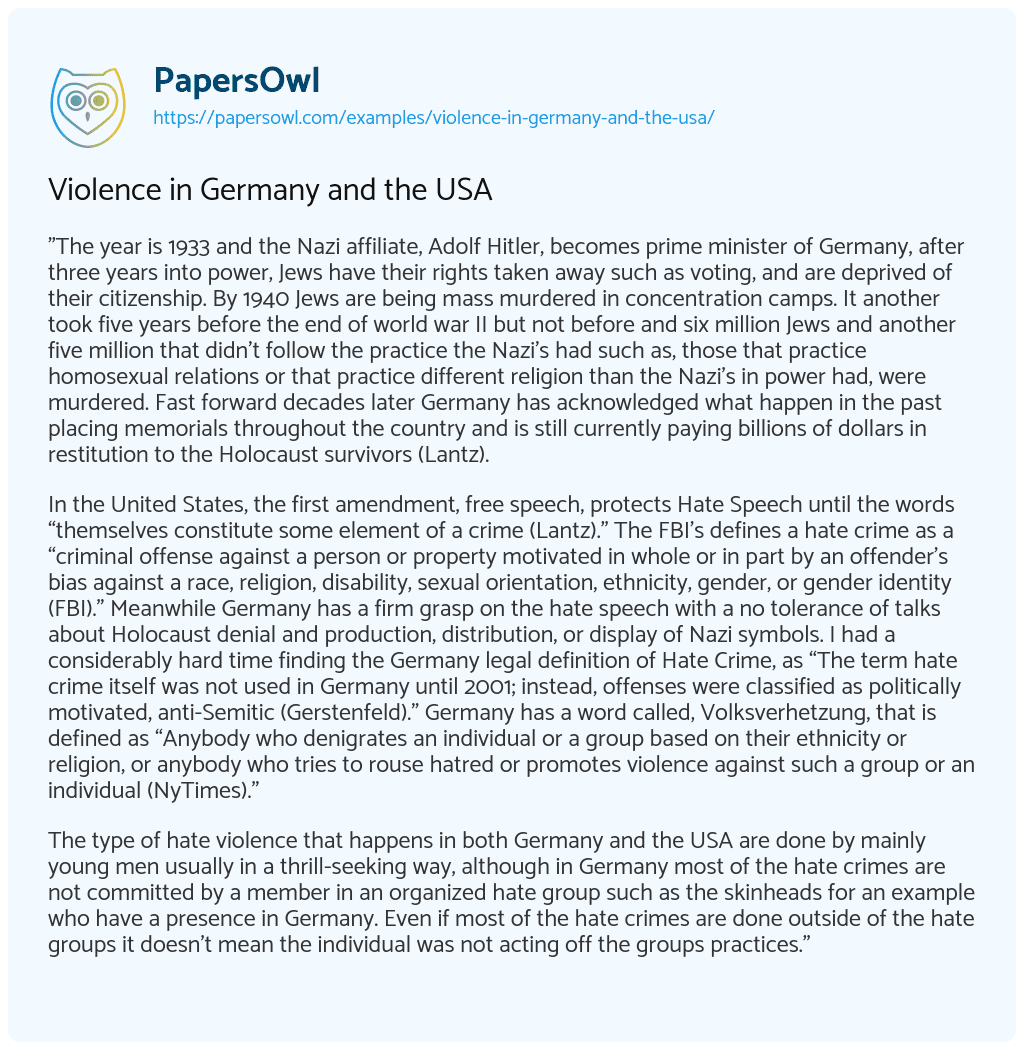 “The year is 1933 and the Nazi affiliate, Adolf Hitler, becomes prime minister of Germany, after three years into power, Jews have their rights taken away such as voting, and are deprived of their citizenship. By 1940 Jews are being mass murdered in concentration camps. It another took five years before the end of world war II but not before and six million Jews and another five million that didn’t follow the practice the Nazi’s had such as, those that practice homosexual relations or that practice different religion than the Nazi’s in power had, were murdered. Fast forward decades later Germany has acknowledged what happen in the past placing memorials throughout the country and is still currently paying billions of dollars in restitution to the Holocaust survivors (Lantz).

In the United States, the first amendment, free speech, protects Hate Speech until the words “themselves constitute some element of a crime (Lantz).” The FBI’s defines a hate crime as a “criminal offense against a person or property motivated in whole or in part by an offender’s bias against a race, religion, disability, sexual orientation, ethnicity, gender, or gender identity (FBI).” Meanwhile Germany has a firm grasp on the hate speech with a no tolerance of talks about Holocaust denial and production, distribution, or display of Nazi symbols. I had a considerably hard time finding the Germany legal definition of Hate Crime, as “The term hate crime itself was not used in Germany until 2001; instead, offenses were classified as politically motivated, anti-Semitic (Gerstenfeld).” Germany has a word called, Volksverhetzung, that is defined as “Anybody who denigrates an individual or a group based on their ethnicity or religion, or anybody who tries to rouse hatred or promotes violence against such a group or an individual (NyTimes).”

Violence in Germany and the USA. (2021, Apr 05). Retrieved from https://papersowl.com/examples/violence-in-germany-and-the-usa/