Hitler’s Rise to Power in History 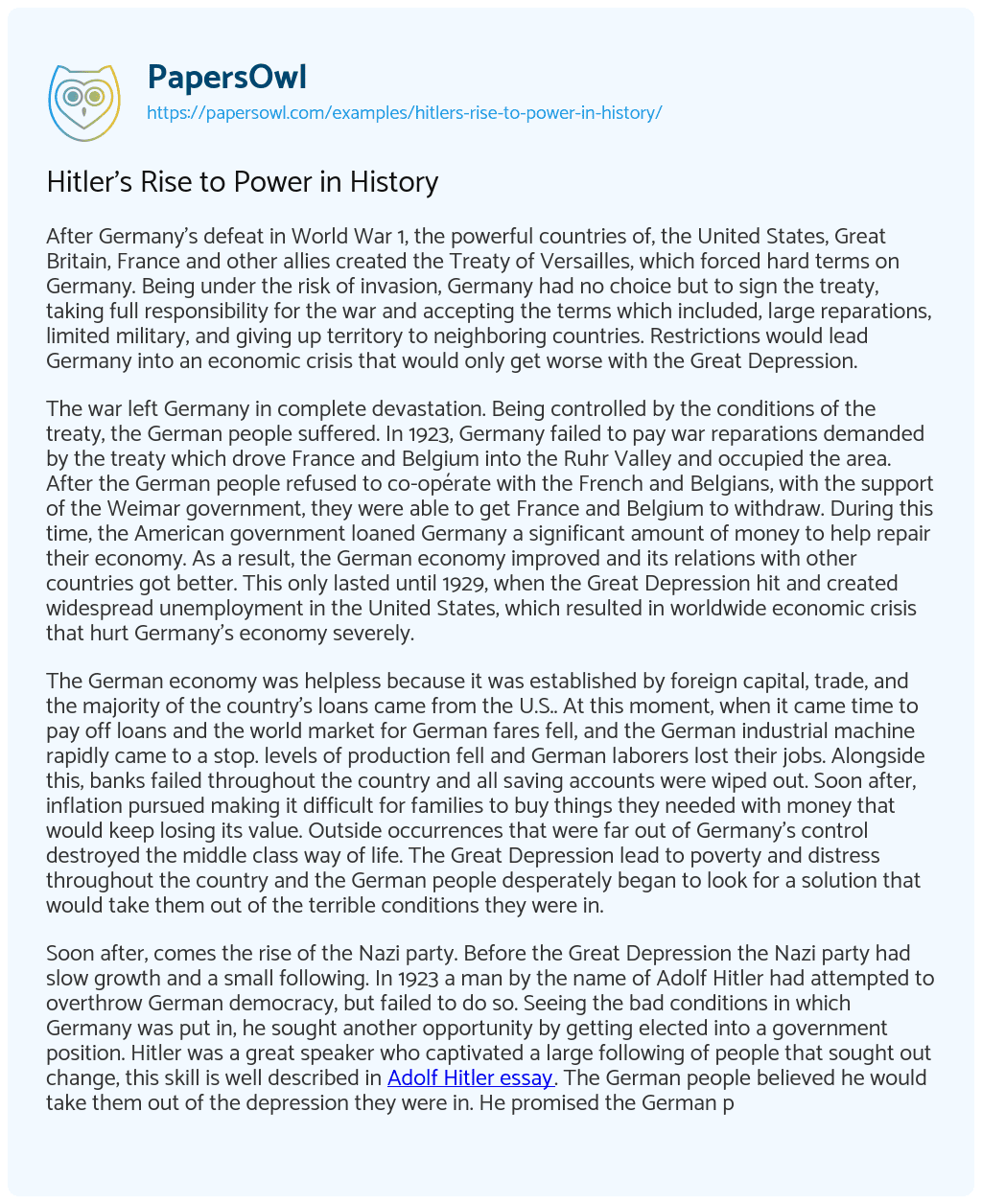 After Germany’s defeat in World War 1, the powerful countries of, the United States, Great Britain, France and other allies created the Treaty of Versailles, which forced hard terms on Germany. Being under the risk of invasion, Germany had no choice but to sign the treaty, taking full responsibility for the war and accepting the terms which included, large reparations, limited military, and giving up territory to neighboring countries. Restrictions would lead Germany into an economic crisis that would only get worse with the Great Depression.

The war left Germany in complete devastation. Being controlled by the conditions of the treaty, the German people suffered. In 1923, Germany failed to pay war reparations demanded by the treaty which drove France and Belgium into the Ruhr Valley and occupied the area. After the German people refused to co-opérate with the French and Belgians, with the support of the Weimar government, they were able to get France and Belgium to withdraw. During this time, the American government loaned Germany a significant amount of money to help repair their economy. As a result, the German economy improved and its relations with other countries got better. This only lasted until 1929, when the Great Depression hit and created widespread unemployment in the United States, which resulted in worldwide economic crisis that hurt Germany’s economy severely.

The German economy was helpless because it was established by foreign capital, trade, and the majority of the country’s loans came from the U.S.. At this moment, when it came time to pay off loans and the world market for German fares fell, and the German industrial machine rapidly came to a stop. levels of production fell and German laborers lost their jobs. Alongside this, banks failed throughout the country and all saving accounts were wiped out. Soon after, inflation pursued making it difficult for families to buy things they needed with money that would keep losing its value. Outside occurrences that were far out of Germany’s control destroyed the middle class way of life. The Great Depression lead to poverty and distress throughout the country and the German people desperately began to look for a solution that would take them out of the terrible conditions they were in.

Soon after, comes the rise of the Nazi party. Before the Great Depression the Nazi party had slow growth and a small following. In 1923 a man by the name of Adolf Hitler had attempted to overthrow German democracy, but failed to do so. Seeing the bad conditions in which Germany was put in, he sought another opportunity by getting elected into a government position. Hitler was a great speaker who captivated a large following of people that sought out change, this skill is well described in Adolf Hitler essay. The German people believed he would take them out of the depression they were in. He promised the German people a better life and a prosperous Germany. He attracted the unemployed and members of the lower middle class. In 1933, Hitler was given the position of chancellor, and rose to power rather quickly, finally dismantling German democracy. Using racist and oppressive ideas he got rid of basic freedoms and took control over everything. In only a few months Hitler had gained all power, forcing organizations, political parties and state governments into line with Nazi ideas and placing them under Nazi rule. Eventually, education, culture, the economy, and laws were all under Nazi control. By July 1933, the Nazi party had become the only political party allowed in Germany. The nomination of Nazi party members to government positions gave Hitler an advantage, gaining more power than other state officials.

To continue, because of depression in Germany and people desperate for change, it made it easy for Hitler to take advantage of the German people by manipulating them and placing the blame for Germany’s problems on a group of people, which would be the Jews. Using propaganda that produced fear, he was able to convince the people of Germany that Jews were in fact the problem and the only way to get rid of the problem was to get rid of them. Media, posters, and speech was used to promote anti-semitism helping the Nazi regime successfully implement laws that would restrict and eliminate Jewish people from society. Some of these laws were, the “ Law of Restoration Of the Professional Civil Service”, which excluded Jews from state service. The “Nuremberg Laws”, defined a “Jew” as anyone with three or four grandparents who were Jewish or observed the religion. The “ Law for Protection Of German blood and German Honour”, banned marriage between non-Jewish and Jewish Germans, and the“ Reich Citizenship Law”, that denied “ Non-Aryans” Of benefits of German citizenship.

During Germany’s hosting of the Olympic Games, the Nazi regime had to temporarily mute Anti-Semitic speech and actions in order to prevent criticism from other countries. Afterwards, the oppression of Jews escalated with the continued “Aryanization” Of Jewish businesses, which involved taking over Jewish business owners. Jews were prohibited from going to public schools, universities, places of entertainment, and places that were only for pure German people. Jews were forced to carry around identity cards and wear the Star of David on their clothing all the time. On November 9 and 10,1938, a wave of brutal anti-Jewish attacks flooded Germany, Austria, and Sudetenland. The Nazis demolished Synagogues, Jewish homes, schools, and businesses. Around 100 Jews were killed that night, which is called the “Night of Broken Glass”. This event increased Nazi persecution of Jews to another level of brutality and violence. Jews were gathered and sent to concentrations camps. Although Jews were the majority, they were not the only group target, but so were those with physical and mental disabilities, homosexuals, gypsies, Jehovah Witnesses and anyone who was not part of the superior race.

Moreover, these concentration camps housed millions of people, and were designed to dispose of them. Overcrowding in the camps lead to the use of death camps, where prisoners were sent and killed at arrival. These people were put in gas chambers where they would be burned alive. Those in other camps would die as a result of over-working, starvation, and disease/epidemics that would arise and spread quickly throughout the camps. This catastrophic event known as the Holocaust claimed the lives of millions of people, that included Jews, Gypsies, Jehovah Witnesses, and many other groups.

In conclusion, taking advantage of Germany’s economic weakness after World War 1 and The Great Depression, Adolf Hitler was able to achieve a high level of success and power by using violence and propaganda that would generate fear and hatred towards the Jewish people and would lead to one of the most known cases of genocide.

Hitler's Rise to Power in History. (2021, Mar 24). Retrieved from https://papersowl.com/examples/hitlers-rise-to-power-in-history/