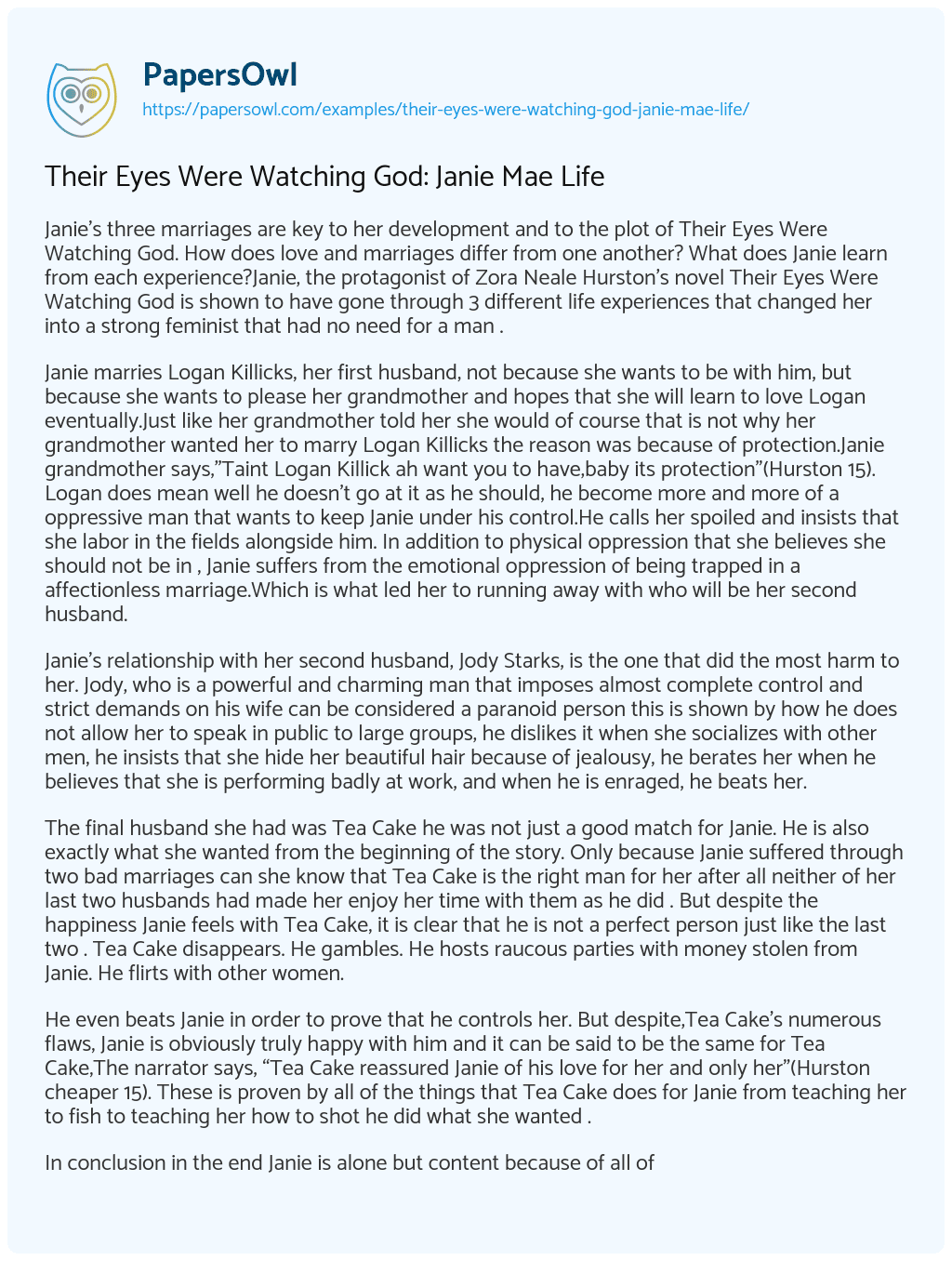 Janie’s three marriages are key to her development and to the plot of Their Eyes Were Watching God. How does love and marriages differ from one another? What does Janie learn from each experience?Janie, the protagonist of Zora Neale Hurston’s novel Their Eyes Were Watching God is shown to have gone through 3 different life experiences that changed her into a strong feminist that had no need for a man .

Janie marries Logan Killicks, her first husband, not because she wants to be with him, but because she wants to please her grandmother and hopes that she will learn to love Logan eventually.Just like her grandmother told her she would of course that is not why her grandmother wanted her to marry Logan Killicks the reason was because of protection.Janie grandmother says,”Taint Logan Killick ah want you to have,baby its protection”(Hurston 15). Logan does mean well he doesn’t go at it as he should, he become more and more of a oppressive man that wants to keep Janie under his control.He calls her spoiled and insists that she labor in the fields alongside him. In addition to physical oppression that she believes she should not be in , Janie suffers from the emotional oppression of being trapped in a affectionless marriage.Which is what led her to running away with who will be her second husband.

Janie’s relationship with her second husband, Jody Starks, is the one that did the most harm to her. Jody, who is a powerful and charming man that imposes almost complete control and strict demands on his wife can be considered a paranoid person this is shown by how he does not allow her to speak in public to large groups, he dislikes it when she socializes with other men, he insists that she hide her beautiful hair because of jealousy, he berates her when he believes that she is performing badly at work, and when he is enraged, he beats her.

The final husband she had was Tea Cake he was not just a good match for Janie. He is also exactly what she wanted from the beginning of the story. Only because Janie suffered through two bad marriages can she know that Tea Cake is the right man for her after all neither of her last two husbands had made her enjoy her time with them as he did . But despite the happiness Janie feels with Tea Cake, it is clear that he is not a perfect person just like the last two . Tea Cake disappears. He gambles. He hosts raucous parties with money stolen from Janie. He flirts with other women.

He even beats Janie in order to prove that he controls her. But despite,Tea Cake’s numerous flaws, Janie is obviously truly happy with him and it can be said to be the same for Tea Cake,The narrator says, “Tea Cake reassured Janie of his love for her and only her”(Hurston cheaper 15). These is proven by all of the things that Tea Cake does for Janie from teaching her to fish to teaching her how to shot he did what she wanted .

In conclusion in the end Janie is alone but content because of all of her past life experiences let her to where she was now from a young woman that couldn’t even make her own uses to a strong one that know how to shoot a gun and fish like a man if not better.