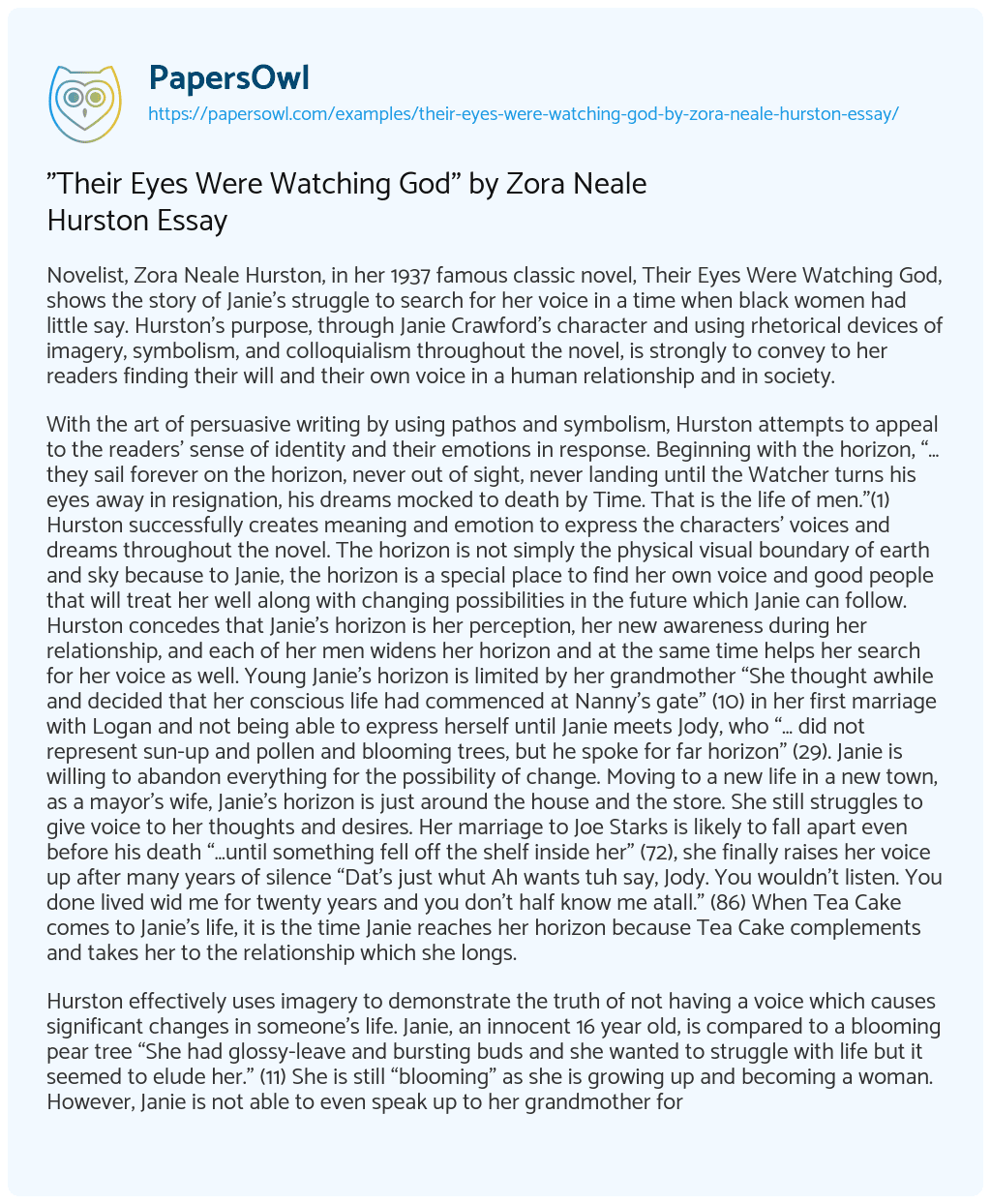 Novelist, Zora Neale Hurston, in her 1937 famous classic novel, Their Eyes Were Watching God, shows the story of Janie’s struggle to search for her voice in a time when black women had little say. Hurston’s purpose, through Janie Crawford’s character and using rhetorical devices of imagery, symbolism, and colloquialism throughout the novel, is strongly to convey to her readers finding their will and their own voice in a human relationship and in society.

With the art of persuasive writing by using pathos and symbolism, Hurston attempts to appeal to the readers’ sense of identity and their emotions in response. Beginning with the horizon, “…they sail forever on the horizon, never out of sight, never landing until the Watcher turns his eyes away in resignation, his dreams mocked to death by Time. That is the life of men.”(1) Hurston successfully creates meaning and emotion to express the characters’ voices and dreams throughout the novel. The horizon is not simply the physical visual boundary of earth and sky because to Janie, the horizon is a special place to find her own voice and good people that will treat her well along with changing possibilities in the future which Janie can follow. Hurston concedes that Janie’s horizon is her perception, her new awareness during her relationship, and each of her men widens her horizon and at the same time helps her search for her voice as well. Young Janie’s horizon is limited by her grandmother “She thought awhile and decided that her conscious life had commenced at Nanny’s gate” (10) in her first marriage with Logan and not being able to express herself until Janie meets Jody, who “… did not represent sun-up and pollen and blooming trees, but he spoke for far horizon” (29). Janie is willing to abandon everything for the possibility of change. Moving to a new life in a new town, as a mayor’s wife, Janie’s horizon is just around the house and the store. She still struggles to give voice to her thoughts and desires. Her marriage to Joe Starks is likely to fall apart even before his death “…until something fell off the shelf inside her” (72), she finally raises her voice up after many years of silence “Dat’s just whut Ah wants tuh say, Jody. You wouldn’t listen. You done lived wid me for twenty years and you don’t half know me atall.” (86) When Tea Cake comes to Janie’s life, it is the time Janie reaches her horizon because Tea Cake complements and takes her to the relationship which she longs.

Hurston effectively uses imagery to demonstrate the truth of not having a voice which causes significant changes in someone’s life. Janie, an innocent 16 year old, is compared to a blooming pear tree “She had glossy-leave and bursting buds and she wanted to struggle with life but it seemed to elude her.” (11) She is still “blooming” as she is growing up and becoming a woman. However, Janie is not able to even speak up to her grandmother for marrying her off to Logan Killicks “The vision of Logan Killicks was desecrating the pear tree, but Janie didn’t know how to tell Nanny that. She merely hunched over and pouted at the floor” (14). Janie’s ideal of love and marriage, “…the thousand sister calyxes arch to meet the love embrace and the ecstatic shiver of the tree…”(11), with passion, a mutual embrace, but not domination, is destroyed during her arranged marriage with Logan. Janie went through her life without saying anything. “Janie waited a bloom time, and a green time and an orange time. But when the pollen again gilded the sun and sifted down on the world she began to stand around the gate and expect things. What things? She didn’t know exactly.” (25) Hurston proves that since Janie accepted and didn’t raise her voice for her life, she was lost and continued waiting from one year to another year for an answer to her awkward situation instead of finding her voice for herself. The voice that would guide Janie in the right direction wasn’t obtained for herself while living under a socially controlled destiny where women endure distress, letdown, and mocking.

"Their Eyes Were Watching God" by Zora Neale Hurston Essay. (2021, May 17). Retrieved from https://papersowl.com/examples/their-eyes-were-watching-god-by-zora-neale-hurston-essay/