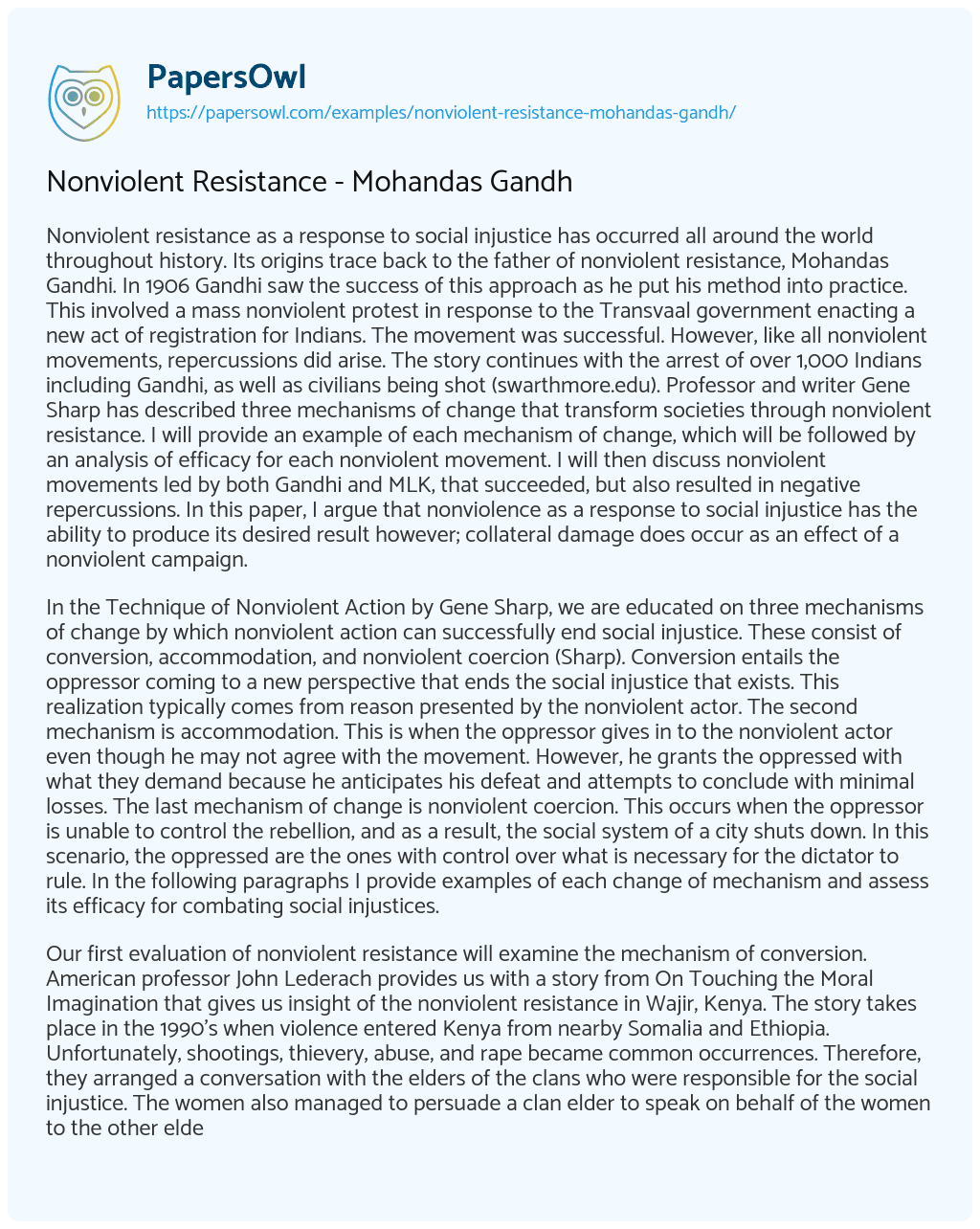 Nonviolent resistance as a response to social injustice has occurred all around the world throughout history. Its origins trace back to the father of nonviolent resistance, Mohandas Gandhi. In 1906 Gandhi saw the success of this approach as he put his method into practice. This involved a mass nonviolent protest in response to the Transvaal government enacting a new act of registration for Indians. The movement was successful. However, like all nonviolent movements, repercussions did arise. The story continues with the arrest of over 1,000 Indians including Gandhi, as well as civilians being shot (swarthmore.edu). Professor and writer Gene Sharp has described three mechanisms of change that transform societies through nonviolent resistance. I will provide an example of each mechanism of change, which will be followed by an analysis of efficacy for each nonviolent movement. I will then discuss nonviolent movements led by both Gandhi and MLK, that succeeded, but also resulted in negative repercussions. In this paper, I argue that nonviolence as a response to social injustice has the ability to produce its desired result however; collateral damage does occur as an effect of a nonviolent campaign.

In the Technique of Nonviolent Action by Gene Sharp, we are educated on three mechanisms of change by which nonviolent action can successfully end social injustice. These consist of conversion, accommodation, and nonviolent coercion (Sharp). Conversion entails the oppressor coming to a new perspective that ends the social injustice that exists. This realization typically comes from reason presented by the nonviolent actor. The second mechanism is accommodation. This is when the oppressor gives in to the nonviolent actor even though he may not agree with the movement. However, he grants the oppressed with what they demand because he anticipates his defeat and attempts to conclude with minimal losses. The last mechanism of change is nonviolent coercion. This occurs when the oppressor is unable to control the rebellion, and as a result, the social system of a city shuts down. In this scenario, the oppressed are the ones with control over what is necessary for the dictator to rule. In the following paragraphs I provide examples of each change of mechanism and assess its efficacy for combating social injustices.

Our first evaluation of nonviolent resistance will examine the mechanism of conversion. American professor John Lederach provides us with a story from On Touching the Moral Imagination that gives us insight of the nonviolent resistance in Wajir, Kenya. The story takes place in the 1990’s when violence entered Kenya from nearby Somalia and Ethiopia. Unfortunately, shootings, thievery, abuse, and rape became common occurrences. Therefore, they arranged a conversation with the elders of the clans who were responsible for the social injustice. The women also managed to persuade a clan elder to speak on behalf of the women to the other elders. “’Why, really,” he asked, “are we fighting? Who benefits from this? Our families are being destroyed.” His words provoked long discussions.

The elders, even some of those who had been promoting revenge killings, agreed to face the issues and stop the fighting.” (Lederach). This story depicts the mechanism of conversion as the clan elderss came to the realization through reason that the social injustice existing was disadvantageous. It is evident that nonviolent resistance in this story was efficient. The women of Wajir formed both Wajir Women’s Association of Peace and the Council of Elders for Peace. They were able to turn the marketplace into a safe environment and limit the clan fighting in the surrounding areas. However, this revolt lead to repercussions of collateral damage. The story continues with further violence that pushes the women into a movement of disarming the fighters. Unfortunately, this disrupted the economic benefits Kenya experienced as fighting provided employment for its citizens. Unemployment and poverty continue to climb in the city today, despite new initiatives by these organizations. Therefore, it is evident that this nonviolent protest as a response to social injustice was successful, however, it did cause collateral damage.

Our second analysis will exam Sharp’s second mechanism of change; accommodation. The year was 1942, when Norwegian Fascist President Vidkun Quisling initiated Mussolini’s idea of the corporative state of education. However, the appreciation Quisling had for Mussolini’s model was not shared with the teachers, that led to a nonviolent resistance, and concluded with social injustice through concentration camps. Unfortunately for Quisling, these concentration camps only strengthened the morale back home, until eventually Quisling had to give in as we can see in the following passage, “As Quisling once raged at the teachers in a school near Oslo: ‘You teachers have destroyed everything for me!’ Fearful of alienating Norwegians still further, Quisling finally ordered the teachers’ release” (Sharp). This nonviolent resistance exemplifies the mechanism of accommodation as Quisling sees his power coming to an end, and in fear of alienating Norwegians further he tries to minimize his losses. This response to social injustice was efficient in the manner of resisting Quisling’s model of the corporative state. The resistance unified the Norwegians together to rise up against the oppressor. Their goal was to end the new education model of a fascist organization, and they were successful in doing so but, this came at a cost. Teachers were thrown in concentration camps, arrests were made, teachers were forced to starve, and families were separated. Therefore, we can conclude from this example that nonviolence as a response to social injustice has the ability to achieve its desired result, however, collateral damage can arise from this revolt.

The final mechanism of change, nonviolent coercion, will be explained through the story of Guatemala, 1944. During this time the country was ruled by General Jorge Ubico who was known for his brutal dictatorship. “Time Magazine quoted Ubico: ‘I am like Hitler, I execute first and give trial afterwards” (Sharp). Eventually Ubico’s authoritarian power was met with protests. One night a nonviolent campaign was formed by women in a silent procession. This silent procession was met with a calvary that fired into the crowd, wounding many and killing Maria Recinos. This was the straw that broke the camel’s back for Ubico, “Guatemala City responded with a silent paralysis. Workers struck. Businessmen shut stores and offices. It was an economic shutdown. Everything closed. (…) The dictator’s power was dissolving” (Sharp). It is clear to see Sharp’s final mechanism of change of nonviolent coercion as the social and political system in Guatemala collapsed. The protests became too massive and Ubico lost total control of Guatemala. The oppressed had now taken control of the power Ubico needed to govern the country. The success of this resistance is evident as the oppressed rose up to overtake the city of Guatemala from its abusive ruler. Despite its ability to produce its desired goal, it is lacking complete efficacy because of the repercussions that arose. The 311 men who signed the Memorial de los 311 all put their lives at risk, many were wounded from the cavalry, Maria Recinos lost her life, and the entire state of Wajir shut down. This example of nonviolent coercion shows that nonviolent resistance has the ability to accomplish its goal, however, it lacks complete efficiency because of the collateral damage the oppressed are faced with.

Another story that exemplifies the efficacy of nonviolent resistance that led to collateral damage was the Salt March that was organized by the father of nonviolent resistance, Mohandas Gandhi. This resistance began as a result of British rule over India requiring Indians to buy overpriced imported salt (britannica.com). Gandhi’s march was successful as Gandhi was able to meet with Lord Irwin and was given a negotiating seat at a London conference to represent India. More importantly, the Salt March showed Britain that Gandhi would no longer allow for oppression of his people from the British. Despite the Salt March achieving these desired results, collateral damage accumulated throughout the nonviolent resistance. For example, over 2,500 Indians were beaten by British led police during a nonviolent march. On top of this, more than 60,000 Indians including Gandhi was arrested. These people were beaten and taken away from their families because they were standing up to social injustice in a nonviolent manner. The Salt March exemplifies my argument that nonviolence as a response to social injustice is efficient, however, it results in the collateral damage of beatings, and arrests.

The Montgomery bus boycott of 1955-1956 was another nonviolent response to social injustice led by Martin Luther King Jr. that achieved its desired result MLK Jr. was seeking. This protest began as a result of Rosa Parks arrest for resisting to give up her seat on the bus. Dr. King organized a citywide boycott of Montgomery’s public transportation. This revolt was efficient as the supreme court found segregation laws for public transportation to be unconstitutional. However, this came with negative repercussions of collateral damage mainly led by the White Citizens Council. This white supremacist group carried out further social injustice upon the African American people in an effort to undermine the boycott. For example, they enforced one policy that arrested any African Americans that were seen waiting at pick-up stations. They also verbally harassed African Americans over the phone to undermine the boycott. On top of this, the WCC was responsible for firebombing MLK’s house (workers.org). The Montgomery bus boycott is another example that explains the success of nonviolence as a response to social injustice, but also shows the collateral damage involved.

It is evident through the examples provided that nonviolent protests are successful, however, they do accumulate collateral damage. Throughout history of Gandhi and MLK, we have seen the oppressed put their lives in significant danger to rise above the injustice through nonviolence. We can see through Sharp’s three mechanisms of change that these responses produce its desired result however; collateral damage does occur as an effect of these nonviolent campaigns.