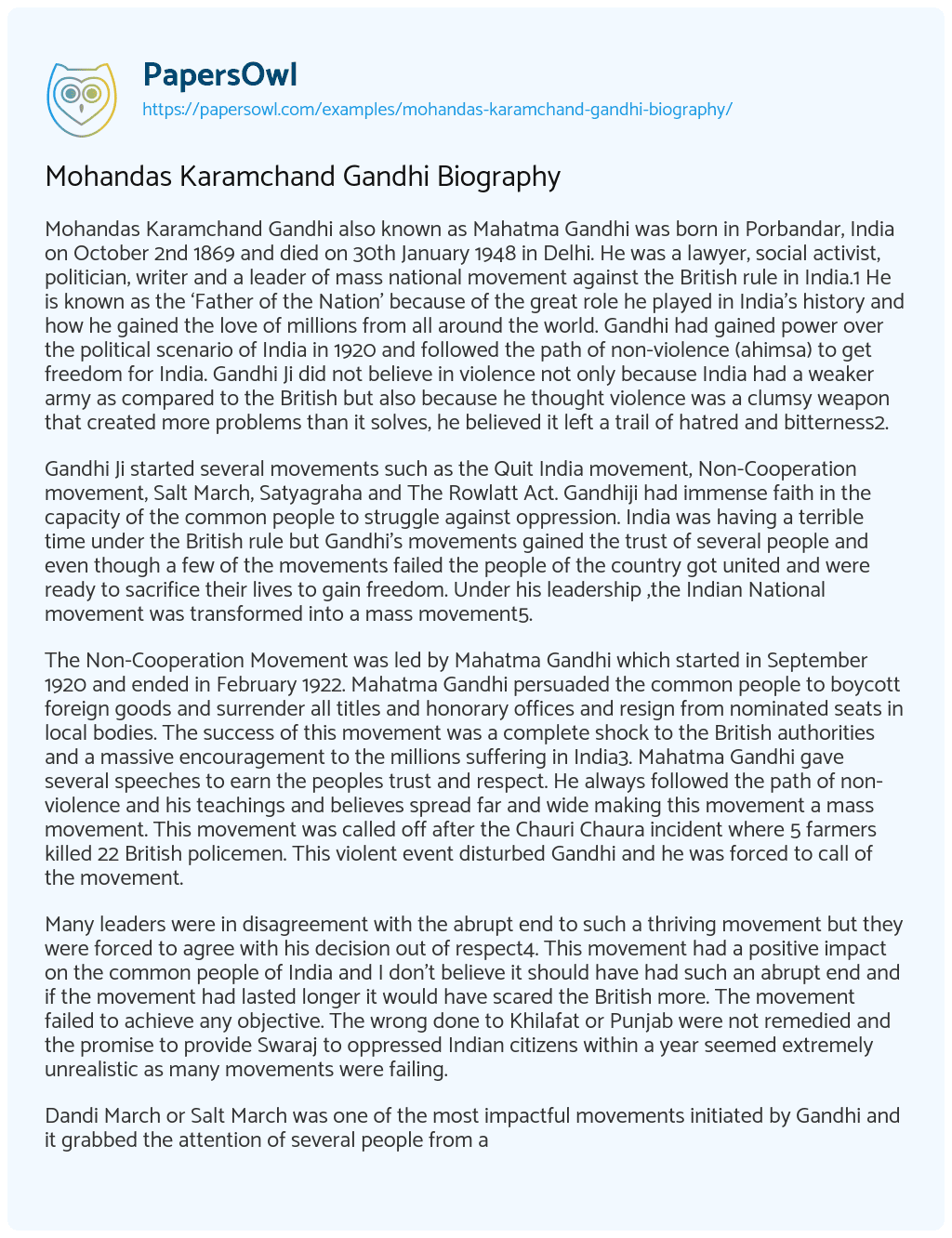 Mohandas Karamchand Gandhi also known as Mahatma Gandhi was born in Porbandar, India on October 2nd 1869 and died on 30th January 1948 in Delhi. He was a lawyer, social activist, politician, writer and a leader of mass national movement against the British rule in India.1 He is known as the ‘Father of the Nation’ because of the great role he played in India’s history and how he gained the love of millions from all around the world. Gandhi had gained power over the political scenario of India in 1920 and followed the path of non-violence (ahimsa) to get freedom for India. Gandhi Ji did not believe in violence not only because India had a weaker army as compared to the British but also because he thought violence was a clumsy weapon that created more problems than it solves, he believed it left a trail of hatred and bitterness2.

Gandhi Ji started several movements such as the Quit India movement, Non-Cooperation movement, Salt March, Satyagraha and The Rowlatt Act. Gandhiji had immense faith in the capacity of the common people to struggle against oppression. India was having a terrible time under the British rule but Gandhi’s movements gained the trust of several people and even though a few of the movements failed the people of the country got united and were ready to sacrifice their lives to gain freedom. Under his leadership ,the Indian National movement was transformed into a mass movement5.

The Non-Cooperation Movement was led by Mahatma Gandhi which started in September 1920 and ended in February 1922. Mahatma Gandhi persuaded the common people to boycott foreign goods and surrender all titles and honorary offices and resign from nominated seats in local bodies. The success of this movement was a complete shock to the British authorities and a massive encouragement to the millions suffering in India3. Mahatma Gandhi gave several speeches to earn the peoples trust and respect. He always followed the path of non-violence and his teachings and believes spread far and wide making this movement a mass movement. This movement was called off after the Chauri Chaura incident where 5 farmers killed 22 British policemen. This violent event disturbed Gandhi and he was forced to call of the movement.

Many leaders were in disagreement with the abrupt end to such a thriving movement but they were forced to agree with his decision out of respect4. This movement had a positive impact on the common people of India and I don’t believe it should have had such an abrupt end and if the movement had lasted longer it would have scared the British more. The movement failed to achieve any objective. The wrong done to Khilafat or Punjab were not remedied and the promise to provide Swaraj to oppressed Indian citizens within a year seemed extremely unrealistic as many movements were failing.

Dandi March or Salt March was one of the most impactful movements initiated by Gandhi and it grabbed the attention of several people from all around the world. It was a 24 day non violent march led by Gandhi, it started on 12th March, 1930 and ended on 6th April,1930. This march began with around 80 people and by the end there were up to 50,000 people taking part in this march for salt. Upon reaching the seashore in Dandi, Mahatma Gandhi broke the law by producing illegal salt. This later turned into a mass civil disobedience movement throughout India as millions broke salt laws by either making salt or buying illegal salt1. This march got international and national recognition and the British authorities were shaken by how such a non-violent movement caused such a large impact.

Gandhi Ji grabbed the attention of the press and this movement was soon known to all, he used his persuasive methods to get more people to join him on 390 kilometre march. Before this march many people believed Gandhi was making a wrong decision by following the path of non violence, after seeing the success of this march people’s minds had changed causing it to become a mass movement. Amrut Modi, secretary of Sabarmati Ashram Preservation and Memorial Trust said, “The main idea of the march was to unite people for the freedom movement.

The march was aimed at preparing a ground for the movement, which could lead to the freedom of the country.” 2 This salt ‘satyagraha’ had created a strong base for the freedom struggle and as Mahatma Gandhi said, “With this, I am shaking the foundations of the British Empire.” 3After the march Gandhiji had been arrested and he wasn’t in the best health conditions as he had fasted for 24 days and was being ill treated in jail.

We can conclude that Mahatma Gandhi’s main aim of the mass movement was to shake the British roots and gain independence for India4. Even though many of his movements didn’t have the outcome he desired it brought India closer together as a country and through his movements most racial discrimination had been swept out of our country. Gandhi had successfully turned the Indian National Movement to a mass movement had because of all the hardwork put in by him to gain independence. He was given the title of ‘bapu’ or Father of the Nation. He is known worldwide for his simple yet revolutionary movements. ‘Be the change you want to see in this world’5 was Mahatma Gandhi’s motto and these words have made a permanent spot in every Indians mind.